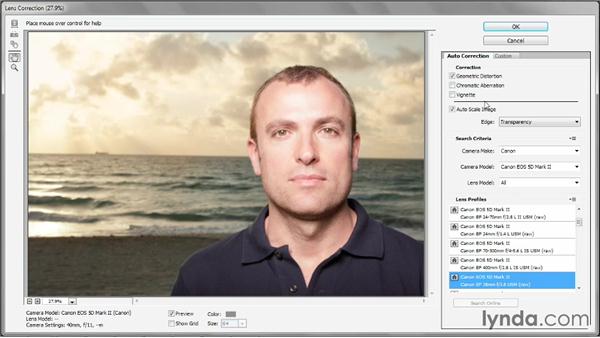 Over the course of this project, we're going to take this portrait shot, which has some great composition in my opinion. But it's a little flat in terms of the contouring. So in other words, his face is lit from straight on, and ends up washing out a bit. So we're going to give it some more volume, and we're going to give it some more depth, in order to come up with this final effect here. I should say this image once again hails from the fotolia image library, about which you can learn more and get discounts, by the way, at fotolia.com/deke. Now, the first thing we need to do is correct for the lens distortion that's associated with this image.

Notice if I switch back to the original. Not only is the image crooked, so it's leaning down and to the right, but his head is leaning in the opposite direction. Almost as if it's skewed. Which means if we straighten the image conventionally with a crop tool, he's going to look more crooked than ever. Also notice that the right half of his face, his left, appears narrower than the left half of his face. And presumably, a lot of that has to do with lens distortion. The idea is that there's curvature associated with the lens element.

And as the light enters that element and then lands on the image sensor, the light actually distorts on its way onto the sensor, and usually that distortion is found around the outside edges. Fortunately we can correct for lens distortion using a filter known as lens correction. We want to apply lens correction as a dynamic smart filter, so I'm going to double click on the background item, here inside the layers panel, and I'll just call this guy Dude. And then I'll go up to the layers panel fly up and then you can choose convert to smart object or if you loaded d keys you can press Ctrl+Comma or Cmd+Comma on the Mac. Next go up to the Filter Menu >Lens Correction, which has a factory shortcut of Ctrl+Shift+r or Cmd+Shift+r on the Mac.

And that brings up this big dialog box that takes over the entire screen. Now the first thing you want to do, is look down here in the bottom-left corner, at the camera model, as well as the lens model, and so forth. Now, I can see that this was shot with a Canon 5D Mark II. Don't know what the lens model is, but the focal distance was 40mm. We've got an aperture value, and so forth. So, what you want to do is make sure that your camera make is set to Canon as by default, and then change the model to the 5D Mark II.

And that's going to increase the distortion initially because it's selecting a bad lens profile by default Ideally, we want something that's capable of a 40 millimeter focal distance. And that might be this guy right there. Notice this ef 24 to 70 millimetre lens. But what I found worked best for this specific image, is this guy down here. The 28 millimeter f1.8 lens. So, if you're working along with me, go ahead and select that one. And then, the next thing we need to do is fool around with these check boxes up here at the top of the screen.

Now by default, geometric distortion is turned on. And that's going to correct for any distortion associated with this image. You also want to turn on chromatic aberration we'll be discussing exactly what's going on with that when we talk about Camera Raw in a future chapter. But for now just know that it's a misalignment of colors around the edge of the image once again and then finally. If your lens is casting a little bit of a shadow around the edge, then you want to turn on the Vignette check box and that's going to change the colors just slightly.

Now switch to the Custom tab, over here on the right hand side. And notice this remove distortion option here, you have the option of adding a barrel distortion or adding a pin-cushion distortion. In order to compensate for the other, the opposite that is. And you can also change that setting using this tool in the upper left corner which is the remove distortion tool. Notice that it tells you to drag toward or away from the centre to correct the distortion. So typically, what I do, is start over here on the far right side of the image.

Because that way, you can drag away from the image into the options, over here, in order to apply a barrel distortion. That's actually the opposite of what we want, so I'll drag toward the center in order to apply a pincushion distortion. Now you can take this value as high as plus 100, and that will apply quite a bit of pincushioning, and you can see the beach is bending now, down here at the bottom of the image. That's too much, so I'm just going to take this value down to plus ten. Like so, and now we need to straighten the image, and you can do that using the straighten tool.

And you use it just like you do when you're working with a crop tool, you just drag along the horizon and then photoshop is going to go ahead and automatically straighten things. And in my case I applied a value here of 359.24. 359.2 is what I'm looking for, but that's just the same, by the way, as negative eight. And I prefer to work that way because, well, that value makes more sense to me. To confirm that you've got things lined up properly, go ahead and turn on the "Show Grid" check box down here at the bottom of the dialog box.

And then you can go to this third tool, the "Move Grid" tool, and you can drag the grid down Until one of the lines matches the horizon. You can see that everything's good to go. Then go ahead and click OK in order to apply that filter as a dynamic editable smart filter, that you can change anytime you like. And this way, I can also see a before and after version of the image. By turning off the smart filters, you can see that by comparison. We have quite a bit of lens distortion going on and then, if I press Ctrl+Z or Cmd+Z on the Mac to reapply the filter, you can see then we get a much better effect.

And, that's how you correct for lens distortion using the lens correction filter here inside Photoshop.