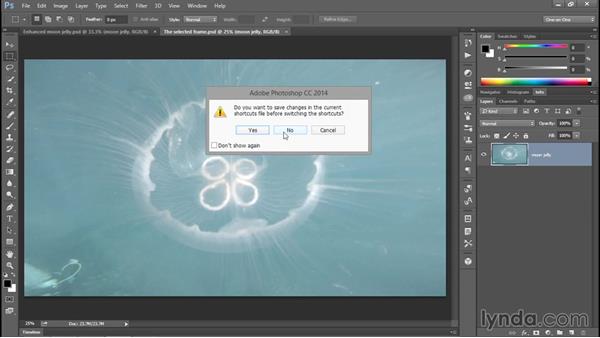 To see what those shortcuts look like, I'll go ahead and escape out here. I'll go up to the Layer menu and choose New Adjustment Layer. You can see that I have a handful of keyboard shortcuts here, all of which involve Control and Shift here on a PC, or Command and Shift on a Mac, along with another character. So we have Control Shift / for Brightness/Contrast, which I think makes sense because there's a slash in the command name. We have Control Shift L, or Command Shift L on a Mac, for Levels and so on. if you have any interest in these shortcuts, you can create your own by going up to the Edit menu and choosing the Keyboard Shortcuts command, and then navigating around.

For example, if I choose this command and then switch from Application Menus to Panel Menus, I can then find the Adjustments Panel right there, twirl it open and if I scroll down a little bit I will come to Brightness/Contrast, which is the first of the Color Adjustment commands followed by Levels, Curves, and so forth. Now you are gonna find if you use these same keyboard shortcuts that you are robbing much lesser commands, in my opinion, of their shortcuts, so that's just something to bear in mind. Now another way to work if you have access to my Exercise Files is to just load my shortcuts up because there's tons and tons of other ones that I in particular, of course, find very useful.

So if you go to the 01_basics subfolder here inside the Exercise Files folder, you'll find a file called dekeKeys for Photoshop.kys. What you want to do to load it up into Photoshop is right click on that icon. This is whether you're working on a Mac or the PC. Then choose Open With and somehow find Photoshop. You do not want to open these shortcuts in Premiere Pro. That won't work for you at all. So go ahead and load them up inside Photoshop one way or other.

In my case it's gonna tell me that I'm switching away from some other shortcuts. I'm just gonna say No, I don't need to save the old shortcuts. Now I'll go up to the Edit menu and choose Keyboard Shortcuts once again so that I can see that I have loaded a set of shortcuts. Now they're not called dekeKeys up here in the upper righthand corner of the Keyboard Shortcuts dialog box. Instead they're called Photoshop Defaults (modified). What you want to do if you want to name them is click on this little hard drive icon with the ... under it because that's gonna bring up a dialog box and then you can call your keyboard shortcuts anything you like.

I'm just gonna go ahead and save over my dekeKeys for PSCC.kys, and click on the Save button and replace the old ones. Because for me it really doesn't matter, they're the same thing. Now I'll click OK. From this point on I have access to all kinds of additional shortcuts. If you want to find out exactly what those shortcuts are in a detailed list, you can check out the very first chapter in my course Photoshop One-on-One: Advanced, also available here inside the Lynda.com library.

Now at this point you might figure when in the heck are we getting around to creating a Brightness/Contrast layer? Well, that would be right now. i'm gonna press my shortcut, which is Control Shift /. That would be Command Shift / on the Mac. That's gonna bring up the New Layer dialog box, which allows me to name the layer in advance of creating it. So I'll go ahead and call it contrast, and then click OK. You can see that my Properties panel is up on screen. I also have access to my Layers panel. The first thing I'm gonna do is switch from the Normal Mode to the very first of the Contrast Blend Modes, which is Overlay.

That immediately produces a higher contrast effect. It's too bright, however, which is why I'm advocating, where this image is concerned, that we take the Brightness value down here inside the Properties panel. In fact, I ended up going with the lowest Brightness value possible, which is -150. Notice that even though I didn't change the Contrast slider at all, I'm getting a much higher contrast effect So this is what things look like without that Brightness/Contrast layer.

This is what things look like with that layer. That is, by the way, a unique effect thanks to my ability to combine a Brightness/Contrast Adjustment Layer along with the first and foremost Contrast Mode, Overlay, here inside Photoshop.