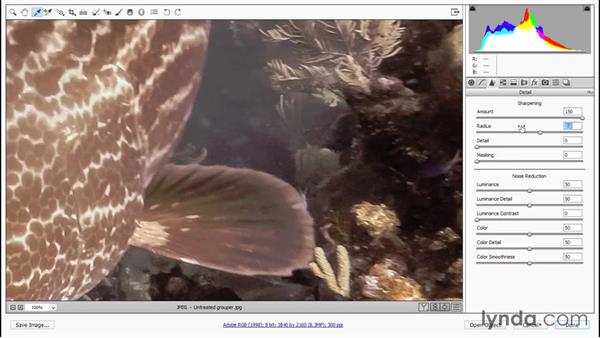 - Alright, in this movie, we're gonna take this image, which is, once again, a frame from a GoPro movie, and we're going to correct its color, tone, and distortion inside Camera Raw. So, pretty familiar stuff by now but very important as well. I'm gonna need to start things off by closing this image right here, because otherwise Photoshop will want to update it after we make some modifications in Camera Raw and things aren't gonna work out properly. So, I'll just go ahead and close the original image, and then I'll switch over to Bridge by going up to the File menu and choosing Browse in Bridge, or you can press Control, Alt, O, or Command, Option, O on a Mac.

And then I'll go ahead and find this original image untreatedgrouper.jpg, and I'll right-click on it and choose Open in Camera Raw. Or you can press Control, R, or Command, R on a Mac, in order to bring up the Camera Raw interface. And I'm gonna make a few quick adjustments. For example, the exposure is too bright in all of these shots. So, I'll just go ahead and press Shift, Down Arrow a couple of times, in order to take that value down to -1.00. And I'll tab to the Contrast value and take it up to 90. And I'll also take the Highlights value down to its absolute minimum of -100.

And I'll take the Shadows value up to its maximum of +100. And then, I'm gonna jump down here to the Clarity value. So, I'll just click on the word Clarity, in order to select that value. I'll change it to 80. I'll tab to the Vibrance value and take it up to 30. And then I'll take the Saturation value up to +10. And that gives us an extremely bluish green image. So obviously, our next step is to correct the white balance. And you can do that, most easily, using this third tool in, up here in the horizontal tool bar, which is the White Balance tool.

And now, I'll just go ahead and click on a detail that should be more or less neutral, such as one of these areas between the spots, here on the fish. And that does a pretty darn good job. In the end, I took the Temperature value up to +25, like so. And then, I went ahead and nudged the Tint value up to +58, in order to create this effect. Now, the last thing we need to do is adjust our whites and blacks. And I like to do that by pressing the Alt key and dragging the slider triangle. And that way, we can see the clipping here inside the Image Preview.

That would, of course, be the Option key on a Mac. And I'm just gonna take this Whites value down, until we have no clipping whatsoever, just like one pixel clip someplace there inside the Image Window, which happens at about -10. And then, I'll also Alt drag, or Option drag, the Blacks value down, until I start to see clipping. And then I'll take it back. And I eventually landed on a Blacks value of -55, like so. Now, of course, that leaves us with a lot of noise, which is apparent once we zoom in to 100% or farther.

And so, I'll go ahead and switch over to the Detail tab, which is this third icon in. And I'll take my Luminance value up to 50, and I'll leave the Detail value set to 50 as well. And then I'll go ahead and tab down to the Color value and take it up to 50. And that ends up doing a pretty darn nice job. So, we've got values of 50, 50, 0, then 50, 50, 50. Now, of course, you can adjust things differently, in any way you like. Now, I'm gonna crank the Amount value all the way up to 150. And that ends up kind of micro-sharpening the image, which is a function of this Detail value, right there.

So, I'll take it down to 0. And then, I'm gonna crank the Radius value, up to 2.0, so we have some thicker edges. Alright, now I'll go ahead and press Control, 0 or Command, 0 on a Mac, to zoom out. And now, of course, we need to correct for the lens distortion, which you can do by clicking on the sixth icon, Lens Corrections. And then, click on the Profile tab, if necessary. And turn on Enable Lens Profile Corrections. Because there's no metadata inside of this image file, Camera Raw doesn't know what to do automatically.

So, you have to manually select GoPro as the Make and change the model to Hero 4 Black Edition, like so. Now, in my opinion, that ends up drawing out the lip way too much, so notice, if I take this Distortion value down to 0, that's how the lip looked before, and then if I take it up to 100 or farther, we get this really big stretched lip. So, to kinda split the difference, I took the Distortion value down to 77. Now, this image does have some chromatic aberrations, which you can see best around the outer edges, especially here in this upper right-hand corner.

And to get rid of it, just go ahead and switch to the Color tab and turn on the Remove Chromatic Aberrations checkbox. And notice, we now lose that blue edge. So, this is how things looked before. We had a little bit of blue right there. And this is how things look now. Now, you may be tempted to try to get rid of that sort of purplish edge, right there by cranking up the Purple Amount value. And that certainly does work to an extent, but notice what we get instead is this abrupt, sort of, gray transition, right there, which I think looks worse than the purple edge.

So, for my part, I just went ahead and let this Purple Amount Value remain 0. Alright, I'm gonna press Control, 0, or Command, 0, again. Now, the final thing I did was to bring out the blue in the ocean. And I did that by switching over to the HSL Grayscale tab, right here. And you wanna select the Saturation tab, for starters. And then, go up to the Targeted Adjustment tool and notice that this tool is tied in with whatever tab is selected. So, if I click and hold on the tool and switch from Saturation to Hue, that's gonna switch me to the Hue tab, as well.

And if I switch from Hue back to Saturation, that's gonna switch to the Saturation tab, which means all I need to do is select a tab and then start dragging inside the Image Window. So for example, if I drag in this empty region of ocean right here, I'm gonna crank up both the Aquas and Blues value. Now, in the end, I took the Aquas value up to 25, and I took the Blues value up to 80. Then, I decided I wanted to darken the ocean well. So, I switched to the Luminence tab, that switches the behavior of the Targeted Adjustment tool, in kind.

And then, this time, instead of dragging to the right, which would increase the brighness, I'll drag to the left, to decrease the brightness. And again, I have some specific values here. I took the Aquas value down to -20. And I took the Blues value down to -32, in order to produce this effect right here. And then, because I wanna be a able to modify this image, as a Smart Object, inside Photoshop. I'll press the Shift key, in order to change the Open Image button to an Open Object button.

And then, I clicked on it, and we end up with a Camera Raw Smart Object, right here in Photoshop, like so. And that is, yet another way, to correct the color, tone, and distortion of a frame from an underwater GoPro movie, here inside Photoshop.