Converting an image to grayscale 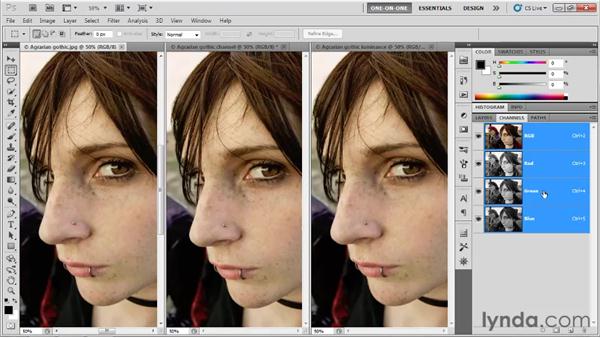 In this exercise, we're going to take our first look at the big world of black-and-white photography inside of Photoshop, which alternately goes by the name Grayscale; the idea being that not only do you have the absolute luminance level of black and the absolute luminance level of white, but you have all these transitional gray values in-between and not only that, you can infuse those luminance levels with color if you want to. You could create a sepia tone inside Photoshop. You could infuse the shadows with one color, and the highlights with another color, and the midtones with still a third color.

So you have all kinds of options that are available to you. I will go so far as to say you are better off where digital cameras are concerned. Shooting in color and when I say you're better off, you're far better off, and then converting the image to black-and-white inside of Photoshop, because Photoshop gives you far more options. You are going to have a world of options once again that are available to you as you will see, and furthermore, if you're shooting to your digital camera's RAW file format, then you are actually capturing the color information anyway, just along with some black-and-white settings.

So shoot in color, convert to black-and-white inside of Photoshop, a bunch of different ways to work; here we are looking at this image called Agrarian gothic.jpg and it comes to us from photographer Scott Griessel of the Fotolia Image Library about which you can learn more at fotolia.com/deke and I am going to show you here the basic three ways to convert a color image to grayscale. So in order to do that, I want to create two additional versions of this image, and I'm going to create these copies by going to the Image menu, and choosing the Duplicate command.

And the reason I'm using Duplicate as opposed to that command under the Window menu, Arrange > New Window for Agrarian gothic.jpg is because we're going to make different modifications to each one of the images. If I were to choose a new window I just see additional windows into those same modifications. I want to make different modifications. So I actually need to create duplicate images. So I will go up to the Image menu, choose the Duplicate command, and I am going to call the first duplicate Agrarian gothic channel, and click OK.

You'll see why shortly, go ahead and zoom-in, and then I'll create another duplicate here, and I'll call this one Agrarian gothic luminance, and again we'll see why in just a moment, click OK, zoom-in to it, then I am going to split up the windows, and this is probably going to send the windows in the wrong order which is a pain in the neck. But I will go up to the Arrange Documents icon, choose 3 Up like so, and sure enough it puts luminance first. I want it to be last, so I am going to move it over like so, and then I want channel in the middle, so I will move it to this location, and then I want to go ahead and scroll all three images, so that I can see that young woman on the right-hand side.

And so I'll go ahead and Spacebar drag the image. I want to show you something, this is interesting. If you've got multiple images opened like this, and you start Spacebar dragging, and then you notice oh! Wait, I forgot to grab the others, then you can press and hold the Shift key along with having the Spacebar down, so you can just press the Shift key in the middle of scrolling in order to grab the other ones. So give that a try if you like. Anyway, I am going to switch back to Agrarian gothic.jpg. Let's go over here to the Channels panel, so that we can see that we have three channels to work with.

This is your standard everyday average RGB image as captured by a digital camera, or a scanner or what have you, and it has a total of three channels, Red, Green, and Blue as we've seen before. If I go up to the Image menu, and choose mode, and then choose Grayscale, Photoshop is going to tell me hey! Do you want to discard the color information? And then it's going to say, this is basically it's saying if not, here is a different way to work. To control the conversion, use Image > Adjustments > Black & White and I will show you how that very powerful command works in a later exercise, but for now just say Discard and I want you to notice what happens here inside the Channels panel.

We go from one color composite image, and three independent channels to one channel and nothing more, just one channel called Gray, and it represents luminance level, and we no longer have any option for color available to us. We just have a fused black-and-white image. So that's one way to work. The other way to work, and these are just the most basic ways by the way, there's many ways beyond this as we will be investigating. Another way to work is to go to this second version of the image, which I've called Agrarian gothic channel, and then you just select the channel that you want to convert to grayscale, because each one of these channels is potentially a grayscale image.

So if I click on the Red channel for example, we see one grayscale representation and by the way, just in case you're seeing these channels in color, if you're seeing a red version of the Red channel, then press Ctrl+K, Command+K on the Mac to bring up the Preferences dialog box, switch to the very next option interface there, and make sure Show Channels in Color is turned off. If it's On, and that would mean somebody had to turn it on for you, but notice here inside the panel, we see Red, Green, and Blue versions of those channels.

Turn it off as by default and we see grayscale. All right! I am going to go ahead and click OK to accept nothing really, I didn't do anything there, but whatever. We now have grayscale versions of each one of the channels which is better for trying to gauge the luminance levels. It's also better for masking and a few other operations. Anyway, there is the red version of the image, because this is a portrait shot, the Red channels is going to be the brightest. This goes for any kind of portrait shot, pale, people like this, dark skinned people, doesn't matter, they're going to be brightest inside the Red channel.

Green channel is going to most closely resemble the grayscale composite as we can see right here. They're not identical to each other. Actually you're going to see quite a few differences in the hair, but they're very similar, and then Blue is going to be the darkest for a portrait shot, and you're going to see the most variety of information inside of those skin tones. For example, that's where this young woman's freckles are showing up the most, and I actually love this version of the image. So this is the one I am going to keep. So the idea is you walk through your various color channels, and you land on the one that's the best representation for you of that black-and-white image that you're trying to convey there, and once you've selected it blue in my case, you go back up to the Image menu, you choose mode, and you choose Grayscale, and then instead of telling you that it's going to fuse the color channels together, Photoshop says, hey! Are you okay with discarding the other color channels? You are going to keep Blue, and you're going to get rid of Red and Green, and you say OK if you are, and then you end up with that same Blue channel, It hasn't changed at all, but it's now called Gray inside the Channels panel. All right! There is one other method for keeping a single channel, and it relies on a completely different color model, and I'll explain how that works in the next exercise.

Video: Converting an image to grayscale