Converting to black and white 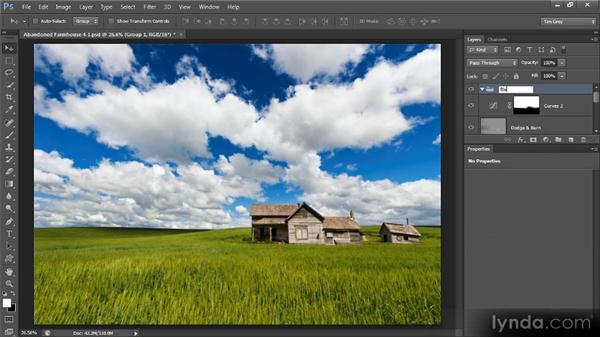 More often than not, my approach to optimizing a photographic image is to make that image relatively true to the scene that I was actually photographing. Sometimes that means I'm trying to make it appear exactly as it looked before the lens and sometimes I'm taking a little bit of poetic license with the scene. In this case I was really focused, for the most part, on making the image appear its best based on the way the scene really did look to my eye. I'll go ahead and scroll down to the bottom of the Layers panel and then I'll hold the Alt key on Windows or the Option key on Macintosh while clicking the Eye Icon for my lower most image layer. What had been my Background Image Layer.

That will turn off the visibility for all layers except this layer, so this is what the image looked like upon conversion from the original raw capture using Adobe Camera Raw. I'll hold the Alt or Option key once again and click on the Eye Icon once more, and that brings back visibility for all layers. And so I can continue in this manner holding the Alt or Option key while clicking on that Eye Icon for my lower-most image layer to see the overall before and the overall after. The colors are certainly a little more vibrant than they appeared in the actual scene, and contrast is a little bit stronger, but overall I'd say this is a reasonably accurate depiction of the scene.

So, I'll scroll up to the top of the Layers panel, and then make sure that the topmost layer is selected. And I'm going to create a layer group, so that I can compartmentalize the various adjustments I'll use for this black and white interpretation into a single group. I'll go ahead and click on the Add Layer Group button. That's the Folder Icon at the bottom of the Layers panel. And then I'll double-click on the name of that layer group, and type a new name. I'll just call this, Black and White Version. And then I'll press Enter or Return to apply that name change.

And now, with this layer selected, I can add additional adjustments and they will be placed inside the layer group, so that they are sort of separate of the overall image, of that underlying full color image. So, I'm ready to create my basic black and white interpretation. So with that layer group selected, I'll go to the bottom of the layers panel and click on the Add Adjustment Layer button. And then I'll choose Black and White from that pop-up. That will add a black and white adjustment layer, which as you can see applies a default black and white adjustment and this removes the color. But I do have the option to adjust the overall luminance values of specific pixels within the image based on their original color value. So for example we've already determined that there's a fair amount of yellow in the greens of the wheat field.

And so if I Drag the yellow slider over toward the right, you'll see that portions of that wheat field get brighter. And if I Drag to the left, that wheat field gets darker. In this case, I think I'd like to brighten up the wheat field a little bit, and right about there is looking pretty good. I can also take a look at the greens slider because there certainly is a degree of green within the wheat. It's mostly yellow, but there's a fair amount of green in there as well. And I think I might just darken down those greens just to add a little bit of contrast into the wheat field.

And in fact maybe even brighten up the yellows just a little bit more. I can also work with the cyan's and blue's in order to adjust the sky, perhaps darkening the cyan's just a little bit, and maybe darkening the blue's a little. I don't want to get too dramatic with this interpretation of the image, but I do think a little more darkening in that sky would work out nicely. So that leaves just the reds and magenta's that I've not yet worked with. I'll go ahead and take a look at those reds, and those are present mostly within the farmhouse. I'll keep that relatively bright, since we do have a fair amount of dark areas in the farmhouse. I'd like those areas that can be brightened to remain bright. And I'll also take a look at the magentas which are much less present throughout the image, so that's not going to be a significant impact for the photo. So you can see that just by adjusting the individual luminance values based on the original colors within the photo, I'm able to produce an interesting black and white interpretation of my photo.

1/4/2013
In this workshop you'll have the opportunity to look over Tim Grey's shoulder as he works on one of his favorite images and gain insight into why he does what he does. See how he chooses one image from a series of similar captures, processes the RAW file to create the best possible starting point, and applies adjustments to fine-tune the look of the image. Plus, work along with Tim as he experiments with a creative interpretation of the image involving an old-fashioned color tint and vignette.
Topics include:

Video: Converting to black and white