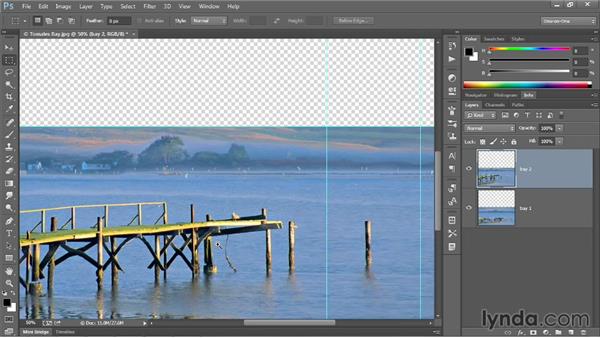 In this movie, I'll introduce you to the final content aware feature, which is content aware scale and it allows you to modify the proportions of an image, while protecting the details. So lets say for example that I want to take this dock and I want to change it from a portrait style image to a landscape style. So I'm going to make it about twice as wide as it currently is and about half as tall, which is a huge modification. Were I to apply a standard scale to this image, I would end up stretching the heck out of it.

Let me show you what that looks like. I'll go ahead and double click in the background. Here inside the layers panel, to convert it to a new layer. And I'll go this guy Bay one and then I'll click OK. And I'll make a copy of it by pressing Ctrl+J or Cmd+J on the Mac and I'll go ahead and rename this new layer bay 2 and I'll turn it off as well. Because we're going to apply the first modification to the bay 1 layer. And that way we'll be able to compare the two effects. Now I need to give myself more room to work. And I'll do so by going up to the image menu and choosing the canvas size Cmd.

And then if you're working along with me make sure the relative check box is turned off and then click in any one of these left hand anchor squares so that we're adding space to the right. I'm going to switch from inches to pixels and then I'll change the width value to 2000 pixels, I'll leave the height value alone for now and then click 'OK' and you could see that gives me a lot more room over here on the right hand side. Now I'll press Ctrl+0 or Cmd+0 on Mac to centre my view. Now you need to have your guide lines up on the screen, if you can't see them press Ctrl+; or Cmd+; on the Mac.

It's also important that the S command is turned on in the view menu. Next, I'll go out to the edit menu, choose transform, and then choose scale, in order to apply a standard stretch to this image. And I'll drag the upper right corner down and to the right like so, until it snaps into alignment with this guideline, and the right hand edge of the canvas. An then I'll press the Enter key, or the Return key on the Mac, in order to apply that change. And you can see that we end up with an incredibly stretched version of this scene, which is not what I want at all.

And notice this bird here is in particularly bad shape. All right, so I'll go ahead and zoom back out here. Let's see how that compares to content aware scale. I'll go ahead and select the bay 2 layer and turn it on as well. And then, you want to go up to the edit menu once again, and this time, choose content aware scale. And things start off looking pretty much the same. We get the side and corner handles around the image. I'll go ahead and drag that upper right corner handle down and to the right, just as I did a moment ago, and you can see, already, things are looking much much better.

And now I'll press the Enter key, or the Return key on the Mac, in order to apply that change. Now from this distance, it looks like Content Aware Scale, has pulled off something of a minor miracle. If I turn off bay 2, you can see this is the stretched version of the image. And then this is the much improved version, thanks to the fact that Photoshop is automatically detecting the details in the image and just stretching the non-details, that is, it's maintaining the dock, and it's stretching the water. I'll go ahead and zoom in, so that we can take things in a little better.

Notice the bird's in great shape, but the dock is not, actually, in very good shape. We've got these bends all over these supporting beams. We have a little bit of a bend over in this detail here, and this line that's going into the water is in terrible shape. And there's all kinds of other stuff that's wrong with this image as well, including this weird detail right there. So, what do you do about that? Well, I'll show you one automated way to protect your details inside this movie, and then I'll show you my preferred way of working in the next movie.

For now, I'll press Ctl+Alt+Z, or Cmd+Opt+Z on the Mac. A few times, in order to restore the original version of the bay 2 layer. Then I'll select it, to make it active and I'll go ahead and press Ctrl+0, or Cmd+0 on the Mac, to zoom back out. Then, with your rectangular marquee tool, you want to go ahead and roughly select the dock, like so. So, I'll select this region right here, and then I'll press the Shift key and select this guy as well. And then, you go up to the Select menu and you choose Save Selection.

Go ahead and name the selection anything you like. I'm going to call mine dock. And then click OK. Now press Ctrl>D, or Cmd>D on a Mac, in order to deselect the image. And return to the edit menu and choose content aware scale. And what you want to do is the same thing we did before just go ahead and drag that top right corner handle down and to the right until it snaps into alignment with the horizontal guide in the right edge of the canvas. And if you zoom on in you're going to see that things are looking just as bad as they ever did because after all we're doing the exact same thing we did before.

Notice there's this Protect option right there. Go ahead and click on it and set it to whatever you called your selection. In my case, Doc. Very important, by the way that this little man figure here is turned off because we don't want to protect skin tones, I'll show you how that works in a later movie. And, you can see that things are still a mess, it really hasn't solved our problem. We also have this amount value right here which basically determines the threshold between a stretch and a non-stretch. So, if I was to take the amount value down to zero.

We would just go ahead and stretch the image as we did using the scale command. And if you'd set it to 100% obviously Photoshop is going to try to avoid stretching as much as possible but you can split the difference if you like. I'll go ahead and click in this value and press Shift+down arrow a couple of times in order to take value down to 80% and that way we end up with a little bit of stretching but not a ton. Anyway I'll go ahead and press the enter key, or the return key on the Mac a couple of times in order to apply that change. And once again the bird is looking in half way decent shape if a little bit stretched now because I reduced that amount value.

But many of the other details inside the image are still suffering including the supporting beams, and to a certain extent the line although it's in much better shape than it was before. But I have to say, what we've go so far just is not acceptable. So if the protect option isn't going to do the trick, and the amount value, of course, sort of defeats the purpose, because after all we're slightly stretching the image. What is the better approach? Well, that's exactly the question I intend to answer in the next movie.