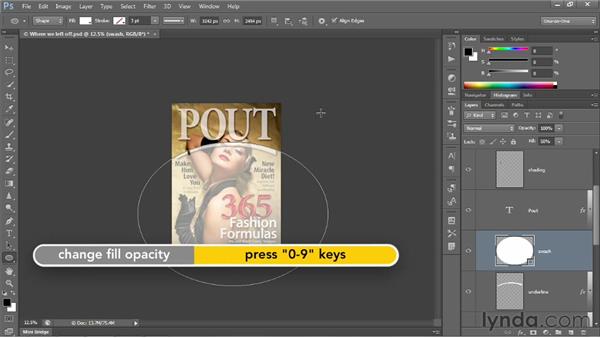 In this movie I'll show you how to combine a couple of very simple shapes in order to create a more complex one. Specifically, we'll be redrawing this underline that's part of the Pout Magazine logo from the previous chapter, and there are two reasons we're doing this. One is, of course, I want to show you this technique, because it's awesome. And the second reason is that our current underline is flawed. Let me show you what I mean by that. I'm going to scroll up my layers list here to the very top item, which is the logo group, and so that I can better see the underline and trace it, of course, I'm going to turn off the layer mask by pressing the Shift key and clicking on that layer mask thumbnail right there at the top of the panel.

Then twirl open the logo group, scroll down, and you'll find this underline layer. Problem with this layer is it's made of pixels, and there's really no excuse for that, especially when we're trying to create super-smooth artwork like this. And the reason is that that results in a less flexible piece of artwork than we might want. For example, let's say at some point, I want to be able to print this magazine cover as a poster--and we will actually be making it into a poster by the end of this chapter. Were I to scale the artwork right now, all of the text would survive beautifully because it's all vector-based. The text will still look super-sharp.

However, the underline will soften if it's scaled, and of course that's because it's made of pixels. So let's go ahead and redraw it. Now one way to redraw it would be to use the Pen tool, because after all, it's obviously a custom shape. The problem with the pen is it my take more work than I want to put into it and also I can get more precise results using the geometric shape tools. Because this is a big sloping arc here, the best shape tool for the purpose is the Ellipse tool. So I'll go ahead and click and hold the current shape tool and select the Ellipse tool from the flyout menu, and then I'll press Ctrl+0, or Command+0 on the Mac in order to zoom out, and I actually need to zoom out even farther.

I need a lot of room to work here. and now I'm going to begin drawing the ellipse. And imagine I want to trace the top of the underline. Obviously, I've missed it by a mile here. But that's no problem. You can just press the spacebar in order to reposition this ellipse, and you may have to press the spacebar a few times in order to get it exactly right. But I kind of lucked out there, this looks good to me. So I'll go ahead and release in order to create that gigantic ellipse. Now I want to fill it with white, and one way to do that is to click the Fill swatch, and then select white from the swatches list.

But because white is currently my background color, I can also just press Ctrl+Backspace, or Command+Delete on the Mac, in order to fill the shape, like so. All right, now the obvious problem is that I can't see what I'm doing. So I know I want this underline to have a Fill Opacity value of 50% because that's what the previous underline layer is set to, as you can see right there. So I'll go ahead and click on this ellipse layer to make it active, and as long as I'm here, I'm going to rename this swash, and then I'll press Shift+5 in order to reduce that Fill Opacity and permit me to see through this ellipse to the artwork I'm trying to trace.

All right, now let's draw another ellipse, like so. And again, you'll need to use the spacebar in order to get that into alignment, so we're trying to trace the bottom of the underline this time around, and then once you get the results you like, go ahead and release the mouse button, and as you can see here, what I've ended up doing is creating a separate layer. That's not what I wanted to do at all. I need these two ellipses to exist on the exact same layer so that I can cut one out of the other. So you may feel like at this point, oh geez! Now we have to go back and redraw that darn thing.

Well, you don't. Once you've drawn a shape, if you like it, you can keep it. All we need to do is switch to the Black Arrow tool--so the Path Selection tool there--click on that path outline to select it, then go up to the Edit menu and choose the Cut command. I will press Ctrl+X, Command+X on the Mac. That will result in the swash layer being selected right there. As long as I'm here, I'm going to click on that swash and nudge it a little bit by pressing the arrow keys, because it was a little bit off. Then you go up to the Edit menu and you choose the Paste command, or press Ctrl+V, or Command+V on the Mac.

Notice, by the way, that the Paste in Place command is not available to us and the reason is because pasting shapes always results in pasting them in place. So you always paste them right at the location you either cut or copy them from. So anyway, Ctrl+V, Command+V on the Mac, you'll end up getting this result here. And again, I need to do some nudging now that I'm zoomed in, and that looks pretty good to me. But we're failing to cut this new shape out of the old one. Even though they exist on the same layer now, they're just being added together.

So what you want to do with this interior shape selected, you want to ho up here to the Path operations icon. Click on it, and notice right now we're combining the shapes, that is we're adding them together. But you have other options as well, such as subtracting the front shape, which is exactly what I want to do in this case. So I'll choose that option and notice that just goes ahead and subtracts the inner ellipse from the outer one. Now notice, by the way, that that option says Subtract Front Shape. That's very important that we're subtracting the front shape from the rear one. If you for some reason have the stacking order wrong--you're not going to, but if you ran into that situation in one of your own future projects--then you can change the stacking order by clicking on the path arrangement icon.

And notice I could send the shape to back, but if I do, it ends up subtracting from the rectangular canvas in the background, and then this guy gets added in the foreground, and as a result we're covering the entire image with white. But to solve the problem, all you have to do is click of that interior shape, go back up to the Path arrangement icon, and choose Bring Shape To Front and the problem is solved. So again, just in case you encounter such problems in your own artwork. All right, so we've managed to draw a perfectly arcing shape here, thanks to our ability to combine a couple of ellipses.

But we need to now crop this shape inside of another one so that we break off these ends, and I'll show you exactly how that works in the next movie.