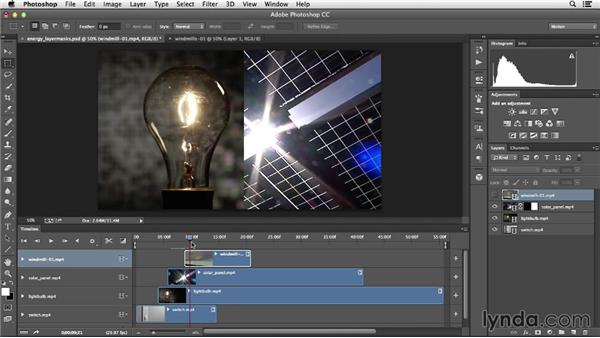 One of the ways to make simple composites of multiple clips is to use layer masks to determine where each video is visible on the screen. For this project, we'll take different video clips and use layer mask to collage them together and create a split screen effect. So my layered file here, I have four video layers. Let's just take a quick look at them. We have light switch, a light bulb, solar panel, and a windmill. The first thing I want to do is work with some timing issues on the light bulb and the light switch, so I'm just going to turn off the eye icons for the windmill and the solar panel and I'm going to move them off to the side.

So let's just move the solar panel over here, and we'll move the windmill off there, because we don't really need those yet. And I'm going to move the light bulb out of the way, and what I want to do now is use the play head here and just kind of scrub through until we get the finger reaching in to turn the light switch on. And I want to get right to the point where the switch goes down. So I'm using the arrow keys to go frame by frame through the timeline here. This is the left or right arrow keys to go one frame at a time.

And you can turn that on, or ensure that that is turned on by coming to the fly out menu for the timeline panel and just choosing Enable Timeline Shortcut Keys. So, that's right where I want it. I'm going to bring the light bulb layer back right about there and the light bulb doesn't turn on for a while. So let me just trim the end of this clip to right where the light bulb comes on, right about there I think, now I'll move that into position. So right now, we have this to where boom, the light bulb comes right on, that's exactly that I want. And that comes on right at about the three second mark here, just a little over three seconds, so I'm going to let it go in maybe about another second and a half, and then I'm going to bring in the solar panels.

So what I'm going to do, is get my rectangular marquee tool, and I'm just going to kind of eyeball a selection of the right half of the image like that. Turn on that layer. Make sure it's active in the layers panel, and come down and click the add layer mask icon at the bottom of the layers panel. So now I have a layer mask attached to this solar panel layer. And we have the light switch come on. And then we have this come on. This is really nice because the flare from the sun comes right in on the edge there. We see those really nice little rainbow color blends.

Okay. So far so good. And next, what I'm going to do is just trim this a little bit more, I think, and bring that in. Okay. Now we're going to bring the windmill in. And we'll position this pretty close. I don't want any of the clips to lag too long meaning, you know, I don't want them to be on screen for a long time. I want them to switch pretty quickly. And I'm going to turn that windmill layer on so we can see it. And what I want to do is, I want to move the windmill over, because I want to have the windmill replace the solar panel.

So I'll get the move tool, and I'll just drag this over to the right. I'm going to hold down my Shift key as I drag that and that will constrain that motion to a horizontal so it's not going to kind of move up and down. Okay, so now I want to add a layer mask. I essentially need the exact same layer mask as I have on the solar panel there. So here's a great trick for copying a layer mask from one layer to another. I'm going to hold down the Option key on Mac, or the Alt key on Windows, and just click and drag that up there, and that's going to copy that mask. Alright, see how that looks there.

And that looks pretty good. Now, look at that. I have seen that before. See that flashing there? Now, let's explain a couple things. First you see this blue line here. This blue line is the RAM preview. With video, Photoshop has to load the video data in, in order to preview it and so sometimes on complicated projects, you might see some jumpiness and some uneven playback until it's loaded in the RAM preview. But we have the RAM preview loaded in here. And even if I play this, we're going to run into this jumpy stuff here.

And the reason for that, and I have no idea why this is true, but after a lot of hair pulling and testing and assistance from colleagues, I figured it out. It's because on this layer here, we moved it over to the side. Let me just temporarily turn that layer mask off and turn all of the other things off. And here's another glitch you should know about. Why are we not seeing the windmill layer? It's because the play head is not currently on the windmill layer. So let's move that over and now suddenly we can see it.

So I moved it over, I've got a bunch of transparency here, and I have this mask that is linked there. Well, the fix for this, believe it or not, is unlinking the mask. That will cause that jumpy playback to go away. So to unlink the mask in this case, and again, this is only the case when you have a layer where you've moved it over and it's not filling the entire frame. We're just going to click on the chain link icon between the layer thumbnail and the mask to unlink it, and now let's check this out.

And now it previews as we expect. So again, I have no reason why that is the case, but that's the fix there. Alright, let's just preview this here, real quick. Light switch goes on, solar panel comes in, timing there is a little bit slow and then we've got the windmill. So this has been a really simple example. But it illustrates quite effectively the central role the layer masks play in any type of compositing, whether you're using still images or video.

And as a bonus along the way, we ran into a couple of little technical glitches that I was able to give you solutions for, so hopefully, if you run into those on your own, you'll know how to handle those. We'll be working with layer masks throughout the course and in later projects, we'll explore more advanced masking techniques to create more intricate composites.

1/27/2014
Learn how to create stunning visual effects and motion graphics for your video projects using a tool you already know and love: Adobe Photoshop. Seán Duggan teaches you how to add motion and life to type, create virtual locations with compositing, adjust the lighting of your scenes, and creatively transition from one clip to another. Along the way, you'll learn how to use the editing features in the Timeline panel, combine multiple clips using layers and masks, composite type and graphics, and animate with keyframes. You'll also get tips for shooting video specifically with compositing in mind.
Topics include: