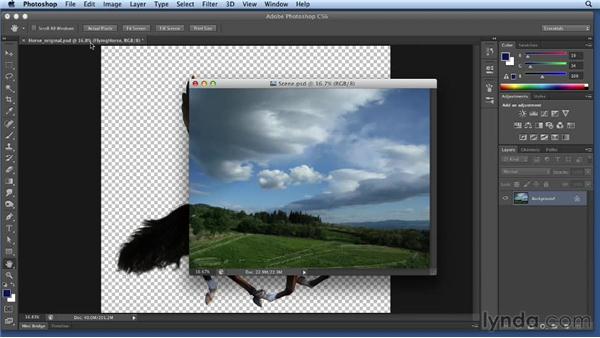 Join Bert Monroy for an in-depth discussion in this video Colorizing the background, part of Creating Dreamscapes in Photoshop: 2.

Now that darkness, that's the Shadow back there. So let's go into that shadow and make sure that we eliminate any parts of it that we don't really want. I'm just going to go in there and erase that shadow where we don't want it, right into that area there. So that we can see that our horse is starting to match up a little better from the way we want him, right in there like that, and we start to get rid of that shadow and all the areas that we don't want. So I'll just make the brush a little bigger. Make it a little softer, there we go. And now, we can soften up that shadow just where we want it, right into there like that.

And I'm going to go in there and hit a Cmd key, so I can go in there and modify my horse. Now, I don't see the area because he's outside of the entire frame, so I'm going to hit Cmd+0, which will allow me to. Shrink the window to the point where I can actually see my horse. And then go in here and shrink him down. Holding down my Option and Shift keys will shrink him down, from the center uniformly down. All right, now I'm going to bring him in here, put him like that, and maybe twist him up a little bit, he's flying up into the sky. I'm going to kind of have him crop off.

Little bit off to the side there, like that, and up to the top. Now, I want this wing to go off, this wing is, just comes in. And in the tail could just about go out just a little bit. So there he is in the scene. Click OK and that's my scene. But the scene right now is looking kind of bland. So what I'm going to do is I'm going to just kind of link him in here so he's. Full screen there, and what I'm going to do with the background is really make it intense. So, I'm going to duplicate it. because I want to keep it as is, and I'm going to just go into Hue Saturation, and really punch up the saturation on it. So, it becomes really bright color.

Like you'd find in a fairy tale book, and so on. And there's our horse in place. So now, we need one more little point of interest. And it's all these clouds in the sky of which some of them are dark. So maybe it rained a little while ago. And there is a sun. The sun's popping out, as we can see. So, what we need is a nice rainbow to complete our little scene here. So in the next and final movie, what we'll do is create that rainbow.