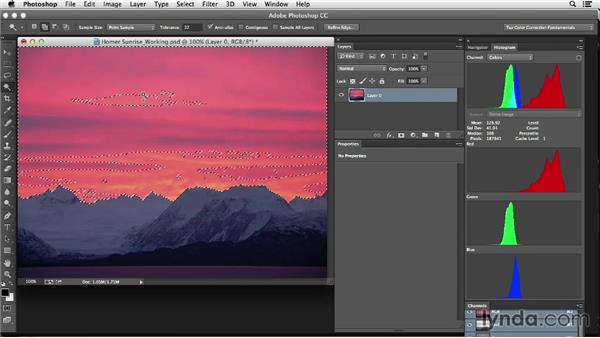 In this video I'd like to talk about the basic nature of the tools that we're going to be use for accomplishing our color correction. And the single point I want to emphasize here is that we want to employ non-destructive editing tools. That is tools that when we apply them, it doesn't actually edit the image just when we apply them so that we can't back up. We want to be able to back up, redo, even throw the tool away without actually affecting the pixels in the image. A non-destructive editing tool kind of works on a preview if you will. We don't actually apply the adjustments until we flatten the image and or do a save as. Alright. One of the first tools we're going to talk about using is Adjustment layers.

It's going to be one of the key kinds of tools that we're going to use. We start out with a basic layer like this. We click here and we have a whole wide variety of adjustment layers. For instance, there's a Curves adjustment layer. When create a, an adjustment layer it comes up and actually creates its own layer, like this. Well, what's the opposite of Let's just back up. Cmd or Ctrl+Z. Alright, we can come, you know, underneath Image>Adjustments>Curves. And bring up a similar type of Curves tool. But when I make an adjustment in just straight curves you see there's no additional layer up here. And any adjustment that I made here is actually made to the pixels in the image and I can't back up from it.

Alright. So although we have curves and levels and all those things as basic tools we're much better off applying them as adjustment layers. So, I would come in here and go curves adjustment layer and then I can change anything that I want here. I come in here I do this I could do that, I could put this away I could come back later and I can take all of this away. Alright. Just completely take all that away. And nothing's actually happened to the pixels yet. And I can apply multiple adjustments layers. So if I can do a, like, a curves adjustment layer. And then I might want to add a hue saturation layer above that. Both of these I can adjust independently. I can come back and edit them as many times as I want to, and with actually no consequences.

And. Notice that I can make adjustments to both of these. Let's go back to curves, alright? And we'll do a darkening and increase in contrast. And then I can decide, well, I don't like any of that. I'm just going to throw them away. Alright? And I'm just going to click here and then Option or Alt+click on the trash can and just get rid of everything. And notice that there's no change to the actual pixels because I haven't applied anything to the actual image yet. So always use adjustment layers whenever you get a chance that you can use them in. Multiple versions of them. Second thing is, if you want to want to work on just a portion of an image, say apply adjustment layer to just a portion of the image, you want to be able to use a mask, and specifically a layer mask, in addition to or along with the adjustment layer.

So how would we do that? Alright, and again, I'm going to go over how to use all these tools in detail later on. I'm just getting you thinking about using the correct tools. So let's say we, we made a quick selection here. Alright? And let's go in and just make a selection of the sky. Alright. There we go. And if I just wanted to work on the sky, now I could, you know, at this point, just come in here and, and do something on the sky itself, like apply curves or levels of something to that. But what we want to do is make our selection, then come down and make our adjustment layer, and notice that that adds a layer mask to the adjustment layer.

Now when we come in here and we can do just a brightening, or change the color, or do the contrast. Whatever we choose to do. And it just affects that portion of the image. And this is completely editable. The nice thing is that not only can I adjust the adjustment layer here, but I can come in and adjust the mask as well. Okay, so using adjustment layers, using mask, to control individual selections as part of an image. If we wanted to control, say, the transparency of an object, let's say that I take this layer and I'm going to right-click on this and we're going to duplicate this layer, and we'll just call this the layer copy, and maybe I'll change the name of this to trans.

To remind me what I'm doing to this layer and then I might make an adjustment. Let's see do we, let's do a darkening of this one. All the way across, there we go. And then I just, well I kind of like that but I'd like to maybe adjust what it looks like a little bit and maybe blend it in with the layer below. I can adjust the opacity of just that layer. If I want to, and how that appears and blends with the layer below it. This is completely undoable or redoable. So if we control opacity, rather than by painting with a color with a certain opacity, if we paint on a layer, and then adjust the opacity using the layers panel.

And finally, one other thing is that, we want to be able to use smart objects when we apply filters, such as a sharpening filter. And once again, we can come underneath here, and come underneath Sharpen>Unsharp Mask. And apply sharpening to this particular layer, and you can call it a sharpening layer. But it's really not un-doable, right? We can't edit it if we decide to do something differently. Alright, so, what we're going to do is we're going to convert this layer, and I'll often do this. I'll create a second layer. Then I'm just going to sharpen or apply a filter too, and it creates a smart object. That's what a smart object looks like.

Now when I come in and I apply a sharpen and say go to my unsharp mask and I apply my sharpening. Notice, and let's just drag this down a little bit, you have this, this smart filters here and you have unsharp mask and I can click on this at any time and I can edit this. Alright? Non-destructive editing. I can change it at any time. Or if I decide to I can just take this filter away I can turn it off. All completely non-destructive and undoable and redoable. So, there are many other non-destructive editing tools in Photoshop but those are the primary ones that we're going to be using in this course.

10/14/2013
Photoshop Color Correction is a series designed to help you understand how color works in digital images, and acquire the skills you need to correct color and make creative image adjustments in a variety of scenarios. This is the foundation of the series. Start here to learn how to use channels and histograms to identify problem areas, apply adjustments such as Curves and White Balance, and make edits that change the entire mood of an image. Taz Tally takes you between Adobe Bridge, Photoshop, and Camera Raw, making sure you get the most power from each tool in the workflow. Future follow-up courses will be project-based "quick wins," but you can return here at any time to revisit the basics.
Topics include: