Choosing the ideal base channel 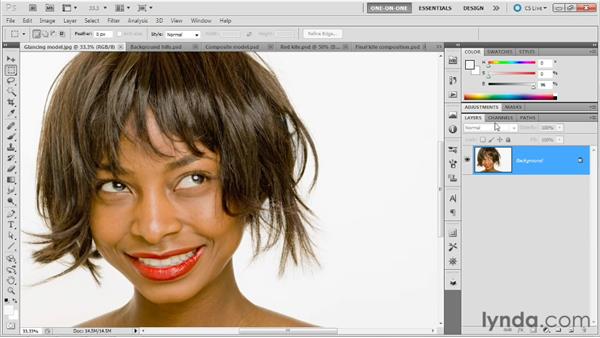 In this exercise, I'm going to walk you through the project that we'll be building, and also show you how to evaluate the channels inside of an image, so you can use the image to select itself. So over the course of this project, we're going to take this woman, with these stray, very fine hairs, and we're going to mask those hairs, along with these delicate edges, notice these along her skin, and we're going to move her into a completely different background. So the two images couldn't be more different -- one is a studio shot, one involves natural lighting -- in which not only have we done a great job of bringing over nearly every single one of those hairs and integrating them into the new background, but we've also maintained those edge highlights, and we have some super smooth transitions as well.

Next, we'll add in this kite, which is a kind of predatory bird. We're going to mask it into the background, as you see here. We'll also add in these bright rays of light, and we'll cast some of the light into the bird as well. And we're going to do this using a combination of conventional, what I'm calling everyday masking, along with a handful of compositing techniques. All right; let's start things off inside the image called glancing model.jpg. It's found inside the 08_everyday folder. And the first thing we need to do is evaluate exactly what we have to work with.

Because, after all, there's a couple of different approaches we can take here. We could start things off by going up to the Select menu, and choosing the Color Range command, and then you can click in the background in order to select the whites, and you could increase the Fuzziness value just a little bit; let's say I took it up to 70, something along those lines. Let's switch the Selection Preview from None, to Grayscale, so we can see what's going on, and then I'm going to go ahead and zoom in on the image. And I want you to see that we have some awfully brittle hair. So even though the Color Range command is just fantastic and maintaining subtle transitions, when you get into very sharp transition territory, as is the case for any filigree details actually, but especially here, then you end up getting pretty sharp, harsh, and ultimately kind of gooey transitions. It doesn't really work out fairly well.

Now, we could end up following this up with a Refine Edge command; get better results. However, there is a better way to work from the very start, so I'm going to cancel out of here. Our better option is to check out what's going on inside of our channels, because our channels are just sitting there ready and waiting for us to exploit them. So I'm going to press Control+0, Command+0 on the Mac, in order to center my zoom, and then I'll switch over to the Channels panel. By the way, because you're going to be flipping back and forth between layers and channels so much here, you may want to recall that if you loaded my DekeKeys keyboard shortcuts, you can press F7 to switch to the Layers panel -- that's a default shortcut -- and then you can press Alt+F7, or Option+F7, to switch to the Channels panel.

All right; I'm going to go ahead and switch to the Red channel. Every single one of us is going to look brightest inside of the Red channel, just as we're seeing in this case here. So her skin is very bright inside of this channel, and as a result, we don't have a heck a lot of contrast, and that's what we're looking for. Bear in mind, we want a big amount of contrast around the edges in particular, between the foreground and the background. So in this case, we've got a white backgroun;, it's not entirely white, as you're about to see, but it's pretty darn bright.

And so, because her hair is so dark, even though it is also orange, by the way, and so it's going to be a little brighter in the Red channel than the others. But we're still getting some pretty decent contrast between those hairs in the background; the contrast is dropping out, however, around the edges of her skin. So all of us orange, which means all of us brightest in the Red channel. I'll go ahead and switch over to the Green channel now. You can see that she simmers down quite a bit. She's still pretty bright, because orange is, after all, a combination of red and green working together.

But her hair has darkened a little bit; her skin has darkened quite a bit. We have a fair amount of contrast going on now, but we still have a dangerous amount of brightness fading into those shoulders, especially over here on the left side of the neck. Now, before we leave the Green channel, I want you to recall back in chapter 1, I was telling you that that Green channel comes the closest to being the grayscale depiction of the image, and as a result, it's going to have some great edges inside of it. So just a rule of thumb: when in doubt, if you can't figure out which channel is going to work best for you, then go with the green channel.

However, that's not our case here, because after all, if we're all orange, what's the color complement to orange? It's going to be blue, so as a result we're all going to be darkest in that Blue channel. And in this case, her hair darkens up considerably, we've got some great edges between her hair and that bright background, we also have the best edges, where these various channels are concerned, between those skin tones and the background, as well. So the Blue channel is going to be the best base channel for our mask, and I'll show you how to turn it into a mask in the very next exercise.

Video: Choosing the ideal base channel