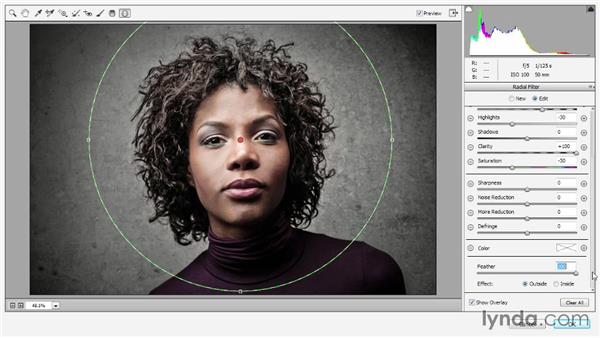 In this movie, I'll show you how to assign Camera Raw as a filter from the Filter menu. And you can apply this command to any pixel-based layer or smart object. So you can actually use it on a layer-by-layer basis inside your compositions. Now, that's not enough to take up an entire movie. So I'll also show you how to use the radial filter which allows you to apply color modifications in the form of a radial gradient. And along the way, we'll create this double vignetting effect in which the model's face is brighter and cooler, and the background is darker and more neutral.

So I'll go ahead and switch over to my starter image. Which comes to us from the Fotolia Image library, about which you can learn more and get discounts at fotolia.com/deke. Now I want to apply Camera Raw as an editable smart filter. So I'll double-click on the background in order to bring up the New Layer dialog box, and I'll name this layer Woman, and click OK. Now I'll convert the image to a smart object by right clicking inside the image window with my Rectangular Marquee tool and choosing Convert to Smart Object. Or if you loaded D keys you can press Ctrl+Comma or Cmd+Comma on the Mac.

Then go up to the Filter menu and choose Camera Raw Filter. Or you can take advantge of the factory shortcut, Ctrl+Shift+A or Cmd+Shift+A on the Mac. And that's going to bring up this big window here. Now notice, when you apply Camera Raw as a filter, you miss a couple of tools. You don't get the Crop tool, and you don't get the straighten tool, because they wouldn't necessarily make sense if we were working in a multi-layer composition. But you do get this tool the Radial Filter and what it allows you to do among other things is create vignettes that are centered not inside the image as a whole, but around the subject of the image regardless of whether the subject is centered or not.

All right I'm going to start dragging it from the center of her nose. And I'll drag outward like so, and let's start with an ellipse. Just so you can see how things work. Now notice if I move my cursor just slightly away from the outline, then it becomes a rotate cursor, so I can drag to rotate that ellipse in any way I want. And this is another thing by the way, that you can't do at all when you're applying a standard vingetting affect. It doesn't happen to be what I want. So I'll go ahead and press Ctrl+Z, Cmd+Z on the Mac to undo it. You can also drag one of these handles in order to scale the vignette.

And if you want to do so proportionally then you have to press the Shift key like so. Now, I want mine to be a cirle. So I'll tell you what. I'm just going to start over by pressing the Backspace key, the Delete key on the Mac and I'll drag one again from the center and I'll press the Shift key as I drag. 'Till it's about this big. Now what's happening here is that by default, the vignette, or any modifications you apply over here in the Right Hand panel, are going to affect the area outside of this circle.

So you can, notice this, you can change the sharpness and you can design some noise reduction and so forth. You can also change the feather. So this could be a very sharp circle indeed, if you wanted to. You could have a sharp transition. Or you could have an exceedingly soft transition. Now, I'm going to go ahead and leave that value set to 50, as by default. And then, I'll go ahead and click OK in order to apply that effect. Alright, now, because I applied Camera Raw as the smart filter, I can change the settings anytime I like.

Just by double-clicking on the words, Camera Raw Filter, here inside the Layer menu. And notice that I'm no longer seeing my settings over on the right-hand side of the screen, and that's because the Zoom tool is selected by default. If you'll just switch back over to the Radial Filter tool And click on that circle right there. It will select it and you will reload your settings. Now let's say I want to add another vignette but this time I want it to control the interior of the model's face. Well there's a couple of ways to start a new vignette. One is to click well away from the old one, like so.

Notice my cursor becomes a cross. And then if I click That automatically selects the new button, here inside the panel. Your other option is with this thing selected, just go ahead and click on a new button, and that will deselect the exisitng gradient. Now I'm going to drag from maybe this side of the nose over like this. And notice as I do that, I'm creating a new ellipse. I want it to be a circle, so I'll press and hold the Shift key, as I draw it. And I also want to move it a little bit, to a different location.

And you can do that, just like any other shape, by pressing and holding the Space bar. So, that allows you to move the shapes on the fly. And I think I'll center it right about there. Maybe I'll take it down just a little bit. All right. Now, what I want to do is, I want to not assign this next effect to the outside. I want to assign it to the inside of the circle, instead. So, I'll go ahead and scroll down this list. And, notice this Effect option right there. It says Outside. I'll change it to Inside, and notice, now.

The circle turns red, to show me that's where the effect is going to stop, and the little dot on the inside turns green, to show me that's were it's going to start. So before we were seeing the opposite, we were seeing the large circle appears green And the small dot appears red. So, those colors actually mean something. I'm going to go ahead and click on the green dot in order to make it active. And, I'll scroll up the list and I want to zero out my values again. So this time, I'll click the minus in front of temperature to preserve it and make it negative. And, zero out all the other values.

And we end up with this version of the image here. And you know I'm thinking something went wrong. This isn't really the final effect I was looking for. So It's a good thing I applied Camera Raw as a smart filter. I'll go ahead and double click on the smart filter there inside the Layers panel. And I'll switch to that tool once again And then I'll click on that left-hand green dot to make it active, and sure enough, I didn't mean to make the shadows value negative, I meant to make it positive, so I'll go ahead and get rid of the minus sign, otherwise, everything's okay. So, now, click OK in order to apply that change.

And just so we have a sense of what we were able to accomplish here, I'll turn off the smart filters, they're inside the Layers panel, and I'll press the F key a couple of times in order to fill the screen with the image and so this is the original unmodified version of the photo. And this if I press Ctrl+Z or Cmd+Z on the map is the double vignette effect created using a combination of the Camera Raw filter along with the Radial Filter tool.