Calculating with the Subtract mode 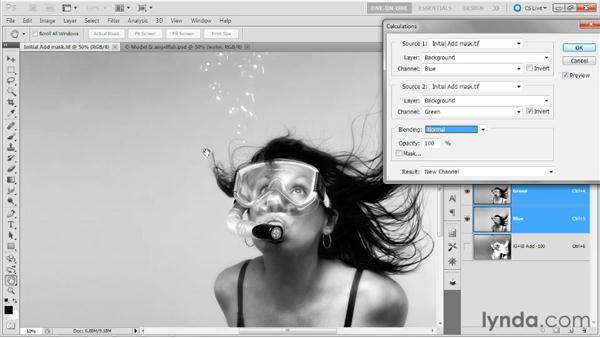 There really is no way to absolutely know the Blend mode that's going to definitely get you the right results. So there's a little trial and error involved, and I'll be providing you with some pointers as we work our way through this course. But for now, know that Add and Subtract are your primary modes inside of Calculations, your when in doubt modes. You just have to take a different approach when using the two. So let's say we just want to try something else out. We just want to compare the results, see if we can get something different, hopefully better using Subtract.

I'll go ahead and choose the subtract mode and initially I end up getting this very dark foreground image against the brighter background. Part of that's due to the fact that I have the Invert checkboxes turned on for both the Source 2 and Source 1 images. But bear in mind that where subtract is concerned Source 2 is our base channel, and we're subtracting Source 1 from it. Therefore, it's going to be helpful if the Blue channel is dark where we want it to be neutral and bright where we want it to go dark.

So in other words, we want to turn the Invert checkbox off, and you can see, as a result we get some bright hair set against a dark background. Now you may wonder why in the world is this working. I just don't get it. Well, let me show you what's up here. I'll go ahead and reduce the Opacity value to 0% so that we can see what the Source 2 channel looks like. It's an inverted version of the Green channel, so we have bright hair set against a relatively dark background, some dark skin tones as well. All right, now I'll go ahead and increase the Opacity value to 100% and change the mode back to Normal so that we can see what the Blue channel looks like when it's not inverted, we're not going to be subtracting the hair this time.

It's already very bright in the Green channel, so we want it to be black in the channel that's going to be subtracted, so that that black region is neutral. Meanwhile, the background is very bright. Anything that's bright in the channel on top when blending is set to Subtract will darken up that Green Channel behind it, and so sure enough, as soon as I change that Blend mode back to Subtract, that bright background in the Blue Channel is subtracting away where the dark colors in the hair are remaining neutral and allowing the bright hair from the Source 2 Channel, the Green Channel to show through.

Now we need to adjust our Scale and Offset values. Now in this case by itself Scale is not going to do us any good, because it's just going to darken up the image further. So if I raise that Scale value to its maximum, you can see that I am darkening up the bright luminance levels inside the hair, that's not at all what I want. So I'll go ahead and restore that Scale value to 1. What I want to do is brighten up the image overall so that we can regain some of these skin tones, we definitely don't want these shadows going black like this, and I am going to send the Offset value to +100 this time, and you can see that we've got some bright edges showing up now, and those will be useful when we try to build the mask, and we still have a nice dark background, even though we've added a Luminance of 100 across the board, because the Subtract mode had ended up syncing those Luminance levels to beyond the Black to negative values.

When we add 100, many of those pixels remain nice and black. Now at this point, if you've felt like the transitions were too harsh, this is when you might come in with a higher Scale value. So for example, I could take that Scale value up to 2 in order to soften the transitions, as you can see here in the hair. However, once again, I start losing some of that contrast, which is not something I want. So I am going to take the Scale value back down to 1. So, it works like this. If you haven't already gotten a sense for it already, it's very rare that you're going to use the Scale value.

I was going to add it on maybe just a little bit here and there to soften some transitions. The value you're really going to rely on is Offset. And in fact, you have my permission to ignore the Scale value altogether if you like. All right, now I am going to click OK in order to create that new alpha channel and I'm going to go ahead and rename it by iG, little i big G, because we have an inverted version of the Green Channel, minus B, no little I this time, because we did not invert the Blue Channel, Subtract this time, just so I know the Blend mode I used and then plus 100, because I went ahead and added an Offset of 100 Luminance levels across the board (iG-B Subtract+100).

And now we can see the difference. This is the Add version of that base mask and this is the Subtract version of the mask. I would go so far as to say the Subtract version is more successful, but we are missing a lot of details around this snorkel and we have some very dark skin tones going on as well. We are going to solve those problems using an application of the Apply Image command in the next exercise.

Video: Calculating with the Subtract mode