Calculating with the Add mode 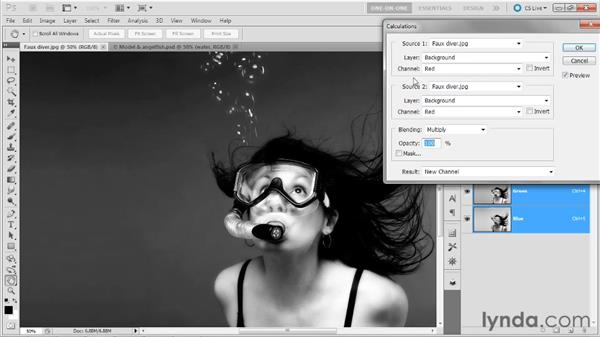 In this exercise, we'll take a first look at the Calculations command combined with the Add Blend mode. I'm working inside a file called Faux diver.jpg, found inside the 01_calculations folder. Over the course of this chapter we're going to take this model with her hair billowing upwards, set against this blue backdrop, and we're going to set her against an authentic undersea background in order to create this final composition. Now, this is a pretty simple compositional effect to pull off. After all, our model has very dark, if not absolutely, black hair, and she is set against a homogeneous backdrop.

I am keeping things simple upfront on purpose here, so we can get a sense for how these complex commands and options work. Now, when you're first initiating a mask, you want to go at it with the Calculations command. Apply Image is useful for refining a mask that you already have in progress, but first you need to take a look at your Color Channels. So switch over to the Channels panel and then go ahead and click on the Red Channel. Now, because our model is a human being, her skin tones show up brightest in the Red Channel. The background is relatively dark because it's blue, so it doesn't have a lot of red going on.

And then the hair is dark. Now, the hair is going to be dark in all three of the channels, because after all it doesn't contain an awful lot of red, green, or blue. So hair is the least of our problems. It's the skin tones that are going to be the most work. Notice that the skin tones show up generally brighter than the background, but not always. In the shadow regions and the shoulders, our contrast fades away. If I switch over to the Green Channel, you can see that once again the hair is darker, the background is brightened up, the skin has become a little darker, especially in the shadow region, and as a result we're losing a lot of the contrast between the flesh tones and the background.

And then finally, in the Blue Channel, the hair is once again very dark, the background has brightened up incrementally, and the skin tones have become darker, once again, especially in the shadow region. So you might argue that the skin tones are generally darker than the background, but again not always. At this point you have to make a determination about which two channels you want to blend together, and the reasoning works out like this, you either want to blend the two channels that contain the most contrast when compared to each other. So for example, the channels that are the most different where this image is concerned are the Blue and Red Channels, so it would make sense to blend those two channels.

Or, you want to take your detailed channel, which is the Green Channel and then blend that with the strongest of the two. Now, for the purposes of my demonstration here, I am going to go with the latter approach. We're going to treat the Green Channel as being our best channel, the detailed channel, and we're going to mix it with the strongest opposing channel, which is Blue. So I'll go ahead and switch back to the RGB image, and then I'll go up to the Image menu and choose the Calculations command. Now, remember in the previous exercise I was talking about how we have an S2 Channel, a Source 2, Channel and then a Source 1 Channel as well.

The Source 1 Channel sits on top of Source 2, where the compositing process is concerned. So you can think of Source 2 as being kind of the background image and then Source 1 is the layer on top of it, as affected of course by the Blend mode, which is located right here next to the word Blending. Now, the most complicated options are these guys right here; Source 1 and Source 2, because they begin with the name of the image. 99 times out of 100 you're going to be blending channels inside of the foreground image with each other, so you're not going to change the image name.

Next, you drop down to these layer options, which are both Background in our case, because we're working inside of a flat image. However, if we were working inside of a layered image, we would have access to all of the layers. You generally want layer set to either Background, or in the case of a multi-layer image, Merged. And we'll see how that works later. Then you want to go ahead and set your Channels to the channels that you determined just a moment ago. So I decided that my base channel of strength was the Green Channel, which is why I am going to change Source 2 to Green.

Then I'm going to set the Source 1 Channel to the next best channel, which in our case is Blue. So I've got the Blue Channel sitting on top of the Green Channel and they're both by default getting multiplied together. Now, at this point you want to get a sense for whether you should Invert either of your channels, and the best way to determine whether an inversion is necessary or not is to view each one of the channels by itself. For example, let's say you want to see the Source 1 Channel, the one that's on top, you want to see what that Blue Channel looks like exclusively of the Green Channel.

You would change the Blending option from Multiply to Normal. Now you're seeing the Blue Channel by itself. The black hair is darker than the background; we presumably want the opposite effect, so I'll go ahead and turn on the Invert checkbox. Now what to do about the Green Channel? Well, to determine that I need to see that channel, and the best way to do that is to reduce the Opacity value to 0%. That way we're seeing through the Blue Channel to the Green Channel below; again, the hair is dark against the bright background so I'll turn on the Invert checkbox for this channel as well. Now I'll go ahead and increase the Opacity value to 100%.

When you're working in Calculations and in Apply Image, 99 times out of 100 you want to leave that Opacity value to 100 %, except when checking out the contents of the channels independently, which means you are going to do all of the blending using the Blend mode. If you click on this Blend mode option, you'll see all of your Darken and Lighten and Contrast modes listed, they work just as we discussed in the Advanced Blending course. These guys right here though, Add and Subtract, include special options. So notice if I change the Blend mode to Linear Dodge (Add), which is the Add mode, we see an Opacity value, but that's it.

However, if I switch from Linear Dodge to Add, which is exactly the same formula, the effect does not change on screen, however we do see Offset and Scale values, which we need to take advantage of, because after all the composite image is way too bright. So we need to darken up the composition, and I'll show you how that works in the next exercise.

Video: Calculating with the Add mode