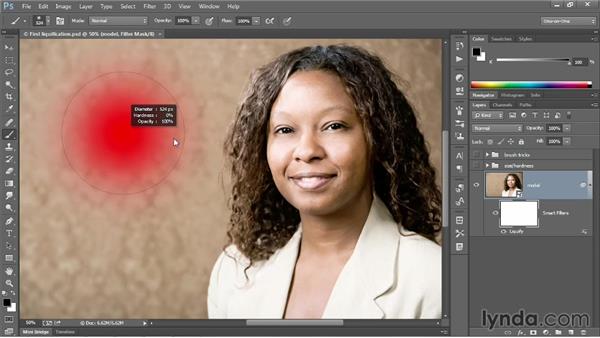 In this movie, I'll pass along another trick for changing the size of the brush that works not only inside the Liquify filter but inside the larger world of Photoshop as well. I'll start things out by double clicking on the word Liquify here inside the Layers panel. And notice that my brush size is currently set to 175 pixels. If you want to very quickly change the size of your brush, you can press and hold on a bracket key. So this is the effect of pressing and holding the right bracket key.B In less than a second, I end up cranking that brush size to 1700 pixels.

And this is a result of pressing and holding the left Bracket key. But more often than not, you're going to want to change the brush size slowly as opposed to quickly. And notice once the brush size gets beyond a certain point, every time you press the Bracket key, you increase or decrease the brush size by 100 pixels. If you want more control, here's a trick that you can take advantage of. The thing is, it works very differently on the PC than it does on a Mac. On the PC, you press the Alt key and then you press the right mouse button and drag to the left to make the brush smaller.

Or drag to the right to make the brush bigger. On the Mac you press and hold the Ctrl not the Cmd key but the Ctrl key and the Option key. So both Ctrl and Option and then you drag with the standard left mouse to the left to make the brush smaller. Into the right to make the brush bigger. These keystrokes also happen to work when using the Brush and Edit tools inside Photoshop. I'll go ahead and cancel out of the Liquefy filter so I can show you what I mean. I'll select the Brush tool which you can get by pressing the "B" key Initially your going to get the little ghost busters cursor because the smart object is selected.

And you can't brush directly on a smart object. You can however brush inside the filter mask, so I'll go ahead and click in the white filter mask here inside the Layers panel. And then I'll move my cursor back inside the image window. And again, for you PC people, you press and hold the Alt key and at first that's going to show you the Eyedropper. Don't worry about that. Just go ahead and right drag with the Alt key down to the right to make the brush bigger, or to the left to make the brush smaller. Notice in that heads up display, it's also telling you the hardness and the opacity of the brush.

So you may well wonder, why in the world is it, that you even see an opacity value there. Well, that's because you have the choice of modifying the hardness or the opacity. And you can determine which one, by pressing Ctrll+K or Cmd+K on the Mac, to bring up the Preferences dialog box. And then notice this check box right there, Vary Round Brush Hardness based on HUD vertical movement. Go ahead and turn that checkbox off. And now when you click OK, and either Alt-right drag on a PC, or Ctrl+Option drag on a Mac. If you drag up you'll reduce the opacity value, if you drag down you'll increase the opacity value.

But I find that most of the time I keep the opacity value at 100%. And that way, I can brush on an independent layer and change the opacity of that entire layer. So I'll go ahead and press Ctrl+K, or Cmd+K on the Mac, to revisit the Preferences dialog box. And then I'll turn that very round brush hardness checkbox back on and click OK. And finally, just because these keyboard shortcuts are a little intricate, I've created a kind of chart inside of this document.

So if you turn on the brush strokes group here inside the Layers panel, you'll see the Macintosh and Windows keyboard tricks listed right there. And then if you turn on the size hardness group, you'll see that dragging side to side modifies the size of the brush. And dragging up and down modifies the hardness or alternately the opacity. And that's how you change the size of a brush with infinite control both inside the Liquefy filter and here inside Photoshop. As well as how you modify the hardness and opacity.