Bringing out the detail in a turtle's eye 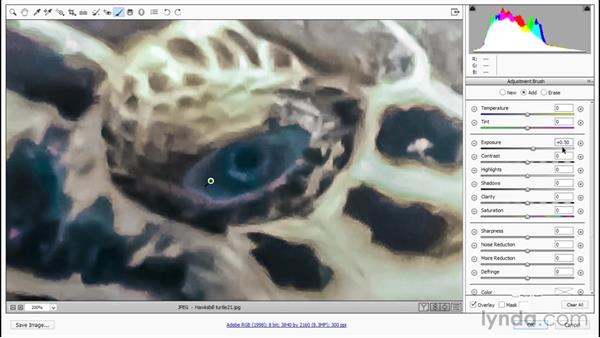 - In this movie, I'll show you how to bring out the detail inside of the turtle's eye. I'm going to start off my pressing Control One, or Command One on a Mac, to zoom into 100%. And then I'll go ahead and scroll to the eye. And you can see that it's not only extremely dark, but it's unnaturally blue as well. Now, I experimented with a few different solutions, one of which was to paint in some artificial highlights in order to create this effect right here. Now, this required a little bit of selection wizardry using the Elliptical Marquee tool.

And I also painted in some brush strokes right there. And I went ahead and saved all that information as a Layer Mask. And then, in order to create these kind of choppy transitions here that are more consistent with the image itself, I used the Healing Brush in order to paint some of these regions right here into the creature's eye. But that was a lot of work, as you might imagine. And it struck me that it might not be the most ethical solution either. And so in the end, I decided to bring out the real detail inside of that eye using Camera Raw, as you're seeing in this final effect here.

So to make that happen, I'm gonna switch over to my image so far. And then I'll go ahead and double click on the thumbnail for this Smart Object layer in order to open the image once again inside of Camera Raw. And now, armed with my Zoom tool, I'll go ahead and marquee the eye like so in order to zoom in on it. And I might back up just a little bit by pressing Control Minus, or Command Minus on a Mac. And then I'll switch to the Adjustment Brush, which you can select up here in the horizontal toolbar. Now I'll go ahead and scroll down this list of options here.

And we're gonna start things off by setting the Size value to just three pixels. A Feather value of 50 is gonna work just fine. And the default Flow and Density values of 50 and 100 respectively will work just great as well. Now you want to make sure that the Auto Mask checkbox is turned off, as it is in my case, so that we can paint freely. And then just go ahead and paint inside of the eye like so. And you want to do so pretty darn carefully as you're seeing me do in this case.

And I might go ahead and paint a little outward into this area of the eye as well. Now, in my case, all the corrective values are set to zero, with the exception of Exposure, which is cranked up to positive 0.5. I'm gonna take it a little bit higher, to plus 0.75. And then I'll go ahead and take both the Contrast and Highlights values up their maximums of plus 100. I went ahead and skipped the Shadows value and cranked the Clarity value up to plus 100 as well.

Now, at this point, I've brought out some pretty interesting highlight details. But we still have that unnatural blue. And to defeat that, I went ahead and took the Temperature value up to plus 10. And I took the Tint value down to negative 10. So plus 10 for Temperature, negative 10 for Tint is gonna remove that blue and replace it with a kind of dull yellow. Now, it seems to me we've gone a little bit too far. So I'm gonna erase the area around the eye. And I'm gonna do that not by switching to the Erase fucntion, but rather by pressing the Alt key, or the Option key on a Mac and dragging.

But just to make sure that we have our same brush settings enforced, go up to this little fly-out menu icon to the right of words Adjustment Brush, click on it, and turn off Separate Eraser Size. So if you're seeing a checkmark, go ahead and choose a command. If not, you can just go ahead and hide the menu. And then Alt drag or Option drag around the eye like so. Now, I may have Alt or Option dragged in there a little too far at the beginning. So I'll press Control Z, or Command Z on a Mac, to undo that erase.

And then I'll Alt or Option drag a little more carefully this time along that bottom eyelid. And now I'm gonna drop down to those bottom options here that allow you define the size and hardness of the brush. And I'm gonna take the Size value up to five this time. And now I'll Alt drag or Option drag along the top of the eye in order to restore a little bit of shadow, which I think is gonna make for a more credible effect. And then I'll go ahead and click OK in order to accept that change and return to Photoshop.

All right, now I'll go ahead and fill the screen with the image by pressing the F key a couple of times. And then I'll center my zoom by pressing Control Zero, or Command Zero on a Mac. And just to give you a sense of what we were able to achieve, I'll press Control Z, or Command Z on a Mac. That's that dark, unnaturally blue eye that we saw at the beginning of the movie. And then if I press Control or Command Z again, that is the bright eye with the more vivid and natural detail, thanks to our ability to apply selective corrections using the Adjustment Brush inside Camera Raw.

Video: Bringing out the detail in a turtle's eye