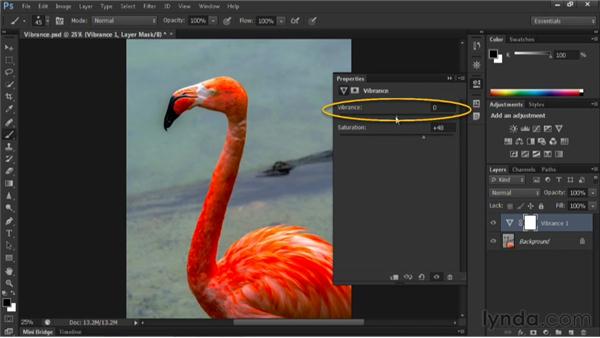 Well, the Hue/Saturation effect is useful, it's very easy to posterize your colors, essentially losing detail in the areas that you boost. Let's compare Hue/Saturation with Vibrance. The standard Hue/Saturation adjustment layer lets you bring up the colors, but notice as you do, how quickly they posterize, and you start to get unwanted simplification of the image. We start to see a breakdown in detail as well as an unwanted color cast being introduced. I'll just throw that away.

Instead, the Vibrance adjustment offers two choices: Vibrance and Saturation. This saturation is different than the saturation in the Hue/Saturation adjustment. Think of this as Saturation 2.0. This lets you improve the overall saturation of the entire image and notice as you drag, it doesn't posterize as much. Now that's a little too much for this image, so I'll back that down a bit. That works out nicely.

If you want to control the non-skin tone areas of the image, such as the blues and greens, the Vibrance adjustment will go after those. So I could bring up the intensity of the water or for that matter, knock it down quite a bit and just put more focus on the bird itself. There is the before and after, and you see that they did a nice job of simplifying the background while improving the overall saturation of the bird. Plus, if you want, you can always duplicate that layer to combine the effect and really start to pop things. Notice there are two instances of the effect being combined to create a new version where the bird is very dramatic. I am happy with that. I'm just going to toss on a gradient. We'll do the black-to- white gradient, set it to Radial, and adjust the size. There we go, just give it a little bit of a vignette and then change that to Multiply to drop out the brighter areas and give us our power-window vignette.

Remember, you can always drag that around within the dialog to reposition it as needed.

5/24/2012
Every photographer has looked at a photo and been disappointed that it didn't convey the original scene. This course reveals how to use Adobe Photoshop to enhance the color, contrast, and sharpness of a photograph. Using tools from adjustment layers to filters, discover how to nondestructively transform your photos. The course also covers how to work with raw images and perform special-case adjustments such as color matching and tinting.
Topics include: