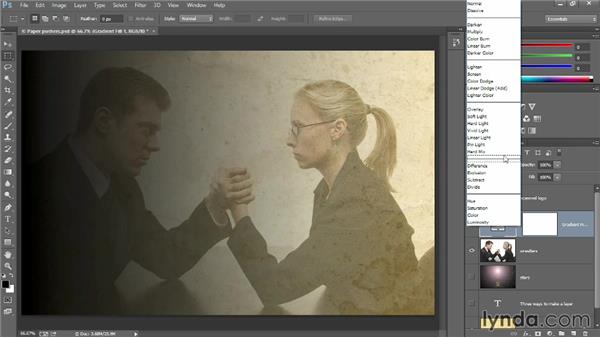 In this movie, I'll show you a couple of ways to blend layers. By which I mean, introduce translucency into those layers so their colors mix together. Now for starters, I'd like my thumbnails to be a little larger, so I can better see what I'm doing. And the easiest way to pull that off is to Right-click in the empty area below the background, and choose, in my case, Large thumbnails. And now I can really see what I'm doing. Now I'll click on the wrestlers layer and notice that I have a couple of images visible at this point, there's the wrestling couple at the top and then there's this parchment in the background.

Let's say I want to mix those two layers together, then I would click on the wrestlers layer. So, you're always working with the topmost of the two layers you want to blend. And then I could change the opacity value up here in the upper right region of the Layers panel and I could either select the value and dial in a new one. Or, I could click the down pointing arrow head and I could drag this slider and as I do, you'll see that the wrestlers become more and more translucent. Let's say I set the opacity value to 70% just to make the math a little easier.

What that means, in case you're curious, is that we're seeing 70% of the wrestlers mixed with 30%, 100% minus 70, of that parchment. And so, it's a kind of image cocktail, if you will, that we're mixing here on the fly. And you can always change that value any time you like. Now, because reducing the opacity is such a common operation, you should know about a very simple shortcut. When any of the selection tools are active, so these tools at the top of the toolbox, then you can just tap a number key.

So for example, if I press the 4 key, I'm going to change the opacity to 40%. If I tap the 5 key, I change it to 50%. If you want more control, for example, you want it to be 66%, then you just press the 6 key twice in a row. If you want to restore 100% opacity, then you press 0. So, obviously modifying opacity is a pretty simple operation. These guys next door are another matter. If you click on the word Normal, you're going to bring up a very long pop-up menu that lists all of the blend modes that are available inside of Photoshop.

And they produce more complex interactions. So, I'm going to turn off the wrestlers layer here and turn on this layer. The text layer. And even though there's a ton of blend modes available to you, we're going to focus on the three primary blend modes. Which are multiply, if you want to darken one image with another, screen if you want to lighten one image with another, and overlay if you want to introduce contrast. Now just to give you a sense of how they work, we're going to start with a gradient. So, I'm going to turn Wrestlers back on.

And I'm going to press the 5 key to reduce their opacity to 50%. And I'll go ahead and turn off that text layer as well. And then notice this little black and white circle at the bottom of the Layers panel. Go ahead and click on it and then choose Gradient in order to create the gradient layer. And the gradient that I'm interested in should be black to white. So, I'll click the down-pointing arrowhead next to the word gradient. And I'll select the third gradient in, which is black-white.

And then I'll click Off to hide that little panel. And I'll change the angle value to just zero degrees, so we have a horizontal gradient. And then I'll click OK. Alright, now let's say I want to drop out the whites and keep the blacks. So in other words, I want a classic darkening effect. You would think you would choose the dark and blend mode. But darken produces a very uneven effect as you can see here and you end up keeping a lot of the brigthness. The one you really want is the next one down, Multiply.

And keep your eye on the screen. Notice the much smoother effect that we get out of that mode. And it's as if all of the brightness has been leached out of the gradient. Let's say I want the opposite effect. I want to keep all the brightness and I want to drop out all the darkness. You would think, given that I want to use a gradient to lighten the background that I would choose lighten. But just like darken, lighten ends up producing a pretty sketchy effect as you can see here. The mode that you want is the next one down, Screen.

And it keeps all that brightness, absolutely gets rid of the dark, as if it never existed. So it's as if we're looking at a gradient that goes from transparency to white. And then, if you want to keep the darks and keep the brights, and drop out all the greys. Then you choose this very first guy in the fourth group, Overlay, and that will produce a dark and bright effect and all the grays will just disappear from view. You can also, if you like, try out hard light, which is going to produce an effect that's more similar to multiply and screen being merged together.

However, for most contrast work, you're going to find overlay to be the better mode. Alright, so now that you have a sense of what those three blend modes do to a gradient, let's try to apply them to some actual images. I'll turn off the gradient here and then I'm going to turn off the wrestlers for a moment. And I'll turn on this layer called Stars that contains this synthetic star pattern that I put together using a few filters. I'll go ahead and click on that layer, very important, to make it active and then lets say that I want to use it to introduce some contrast.

I would go up to the Blend Mode pop up menu and choose Overlay and we'll end up with this effect right here. So this is what the paper looks like without that layer. This is what it looks like with this layer, and that's going to create a kind of bright spot that represents the friction between the wrestling couple. Now, I'll turn on the wrestlers layer and click on it to make it active. I want to restore the opacity value to 100%, and I can do that by pressing the zero key. And now let's say I want to keep the darks, but I want to drop out the brights.

That's the same as using one image to darken another. So, you don't choose Darken, you choose the next one down, which is Multiply. And we end up with this effect here. And finally, I have the scanned logo down here in the lower left corner. An incidentally, I'd initially scanned it as black against a white background. And so I inverted the colors, and that's a very easy thing to do here in Photoshop. You just go up to the Image menu, choose Adjustments, and choose Invert. Or you just take advantage of the keyboard shortcut, Ctrl+i, or Cmd+i on a Mac.

So, originally it looked like that. I'll use the invert command to make the background black and the letters white. Now, lets say that I want to get rid of that black background. Well, a lot of folks are inclined to use the magic wand tool so I'll go ahead and select it just to show you what that looks like. And Ill restore the default settings up here in the Options bar. And that's something you can do, just a little trick, by right-clicking on the little picture of the tool over on the far left side and choosing Reset Tool.

And then you get the original tolerance value of 32, and Anti-Alias gets turned on again. Click inside the black to select it, and then press the Backspace key or the Delete key on the Mac in order to get rid of that background. And press Ctrl+D or Cmd+D on the Mac in order to deselect it. Problem is, not only do we get some pretty rough results, especially around the moon, right there. But we just applied what's known as a destructive modification. That is, to say, we've permanently deleted those pixels. And if we continue marching along here, there's going to be no getting them back.

So, what I'm going to do, in order to get everything back, is bring up the history panel once again. And I want to click all the way back to Blending Change, because that was the last useful step I applied, and that'll restore all of those pixels. And then, instead of using the wand, we'll apply a Blend mode. We want to drop out the blacks, and we want the bright letters to lighten the background. So, I'll go ahead and click on this layer in order to select it. And then, instead of choosing Lighten, I'll choose the Screen mode. And we end up with this effect right here.

And notice how that halo around the moon blends right into place. Alright, now I'll press Control zero or Command zero on the Mac in order to zoom out and that is the final version of the composition. With the colors of the various layers mixing together thanks to our ability to modify Opacity and Blend Modes here inside Photoshop.