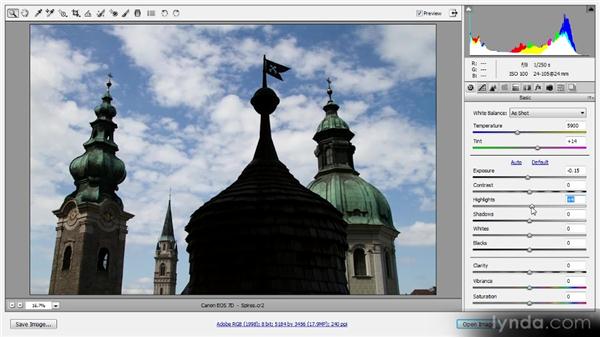 In photography, we need to pay careful attention to exposure. And so very often, the tonal adjustments that we apply to an image after the capture tend to be very important. Adobe Camera RAW includes a variety of adjustments that allow us to very precisely control the overall tonal values within a photo. The sliders that we'll use to adjust basic tonality in the image include Exposure, Contrast, Highlights, Shadows, Whites, and Blacks. Exposure, as the name implies, affects overall luminance, but the emphasis is on the white point.

So, as I increase Exposure, you'll notice that we get a stronger effect into the bright areas of the image rather than the dark areas. So, you can generally think of exposure as simply establishing the white point within the photo. And in fact, we can hold the Alt key on Windows or the Option key on Macintosh to see when we're starting to experience clipping or loss of highlight detail while we're adjusting exposure. Obviously, we'll need to evaluate the image all by itself without that clipping preview, so that we get a better sense of whether or not the adjustment we've applied is a good one. Just because we've brightened the brights until just before the point that they start to clip, doesn't mean that's a good adjustment.

And so while you might use the Clipping Preview to help you establish a basic exposure setting, you'll need to fine-tune evaluating the image all by itself. The Contrast slider of course is relatively straightforward. Dragging to the right increases Contrast, darkening up the shadows and brightening up the highlights. And reducing Contrast will cause the image to get a little bit more muddy, with less of a tonal range overall. In most cases, we like to increase Contrast at least a little bit, but you need to be careful not to increase it so much that you start to lose detail or the image starts to look a little bit artificial.

Where the real control comes in are the Highlights, Shadows, Whites, and Blacks adjustments. These allow you to adjust the brightest and darkest areas independent of each other. The Highlights and Shadows affect a relatively broad range of total values in the image, and the Whites and Blacks affect a relatively narrow range. So, for example, if I increase the value for Whites, you'll see that for the most part, I'm really just affecting the clouds, the brightest area of the photo. And as I reduce White, so you see that we're darkening primarily just the clouds.

I'll leave that value set to zero. And then adjust Highlights and you can see here we get a broader range of the image being affected. Similarly, we can adjust blacks and we'll see that only the darkest areas of the image are being effected, mostly the shadows in the buildings. Whereas if we adjust Shadows, we're effecting a much broader range, essentially the entirety of each building in this particular photo. What that means is that we're able to adjust bright and dark areas of the image independently. And essentially, establish white and black points with the Whites and Blacks sliders.

And then determine the level of detail we want to see in the highlights and shadows using the Highlights and Shadow sliders. I'm going to reset the control, so that I can start over now that we have an understanding of what each of these sliders do. And so, I'll hold the Alt key on Windows or the Option key on Macintosh to change the Cancel button to a Reset button, and then I'll click that button so that the controls are reset. In this image I think that overall exposure is just fine, so I'll leave that Exposure slider where it is. I would like to increase Contrast, just a little bit, a very small amount. So, I'll increase the Contrast slider.

Next, I'll take a look at the whites and the blacks. I'll hold the Alt key on Windows or the Option key on Macintosh, while adjusting the Whites value. And I'll increase it until I start see clipping with that Clipping Preview. I'll then release the Alt or Option key, and evaluate the overall image. In this case, maybe toning down those brights just a little bit. This gives me a relatively strong white point, in other words, I have some bright areas of the image that are nearly white, but I think I'd like to increase the level of detail in those clouds.

So I'm going to adjust the Highlight slider downward just a little bit in order to improve the texture in those clouds. Then I can move on to the Blacks and Shadows. I'll start off by establishing a black point. Once again, holding the Alt key on Windows or Option key on Macintosh. And in this case, increasing the value for Blacks so that we don't lose quite as much detail in those dark shadows. I can then work with the Shadow slider in order to affect overall detail in the shadows. And I think I'd like to open up just a little bit of detail in this case.

I'm happy with that overall adjustment, but the key thing to keep in mind is that we do have this high degree of control. I can darken up those Shadows if I want to create more density or perhaps even create a silhouette type of effect. Or I can increase the value of Shadows in order to open up more of that shadow detail, sort of like the effect you might get with a Fill Flash. So, I'm able to fine-tune not just the overall tonality, but the actual level of detail I'm able to see in various areas of the image, using the sliders to affect tonality in a photo.