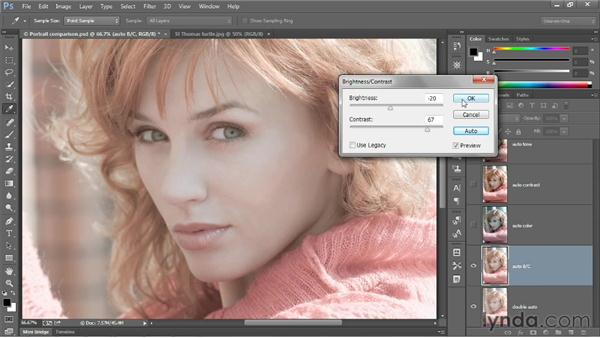 In this movie, I'll show you how the three Auto commands affect our washed out portrait. And I'll also introduce you to a fourth hidden auto feature that's going to make all the difference, and by the time we're done, we'll have this image fully corrected. Now, notice that I have a bunch of different layers stacked on top of each other. They're all copies of that same image, just so that we can compare the effects. On top, we have the control layer, which I won't modify. I'll just go ahead and turn it off now. Now, I'll click on the auto tone layer.

They all look the same by the way for starters, and I'll go up to the Image menu and choose Auto Tone. And this is that command that makes the darkest color black and align this color white on a channel by channel basis. It can fair well for some images and I'll show you an image that it works great on. But, when the image doesn't have a color cast in the first place as this one doesn't. It's going to introduce a color cast, as we're seeing here. So it ends up giving her a kind of greenish ghoulish look, which is not want we want, so I'll go ahead and turn that layer off.

Then I'll switch to the Auto Contrast layer, go up to the Image menu and choose the Auto Contrast command. This is that one that turns the darkest color black and the lightest color white on the composite bases. So in other words, it does not introduce a color cast, meaning that it doesn't modify the color cast. And since we don't have a color cast in the first place, that suits our image quite nicely. And we get this pretty darn great correction here. I'll go ahead and turn that one off and then I'll click on auto color here inside the Layers panel. Go up to the Image menu and choose the third of the Auto commands, Auto Color, which is as you may recall, attempts to neutralize the midtones. Sometimes, it works out great.

In the case of our image, it really doesn't. We end up getting this sort of blue-ish look. So just to give you a sense, I'll turn on Auto Tone. Auto Tone, we got kind of a green-ish look to the image as you can see here, and then Auto Color, it ends up turning a little bit blue. All right, now for the hidden Auto function. I'll go ahead and turn the Auto Color off and I'll click on this layer auto B/C, which stands for automatic brightness contrast. To get to that one, you go up to the Image menu, choose Adjustments, and then choose the Brightness/Contrast command. And notice that we have a couple of sliders, Brightness and Contrast, pretty darn easy to use.

Although, I'll cover them in more detail in the very next movie. For now, I'm just going to click on this Auto button. And at first, it's going to seem like nothing's happening. But it's because it's computationally intensive and it's trying to gauge what's going on inside the image. But in a moment or two, you will see the image shift on screen, as it has here. Now, if you don't love what you see, because it's a pretty subtle modification in this case, you can adjust the sliders to taste, and I'll show you how to do that, as they say, in the next movie.

But, for now I'm just going to click OK in order to accept that modification because I want you to see that there are certain circumstances under which you might want to combine a couple of auto features together and this image is a perfect example. I'm going to turn off auto B/C, and we'll see down here at the bottom, double auto. And I'll start things out by going up to the Image menu, and choose Auto Contrast in order to apply that effect, because so far, it's the most successful thing we've seen.

And then, I'll go out to the Image menu, choose Adjustments, and choose what is so far the second to most successful option, which is Brightness/Contrast and click on its Auto button there. And wait a few moments for the effect to apply. And you'll know it applies as soon as you see different values show up here. Inside the dialog box, and sure enough, we get yet a different effect. And of everything that I've seen so far, it's my favorite. I'll go ahead and click OK in order to accept that effect.

And just so you can see the difference, I'll press Ctrl+Z, or Cmd+Z on the Mac. So, you can see, Auto contrasts on its own. And then, if I press Control or Command C again, you can see, this is the effect of combining Auto Contrast along with the Auto button that's included with the Brightness/Contrast command. All right, let me end things by showing you a circumstance under which auto tones works great. So I've got this photograph here that I've shot of this turtle in St. Thomas and I had free-dived down about 40 feet in order to get to this turtle.

And so, as a result, we don't have much in the way of colors. The deeper you get in the water, the more color gets filtered out and the first color to get filtered away is red, and then yellow, and pretty soon you're left with nothing, but greens and blues as we're seeing here. So this qualifies as an image that has a huge color cast. And when you run into an image like this, you want to try out either Auto Tone or Auto Color. I'll start out with Auto Color, because many times it stands the biggest chance of doing a good job.

In this case, it looks okay. Not that great though, so I'll press Ctrl + Z or Cmd + Z on a Mac to undo that change and then I'll go up to the Image menu and try out Auto Tone instead, and we end up getting this effect here. And we can still see some optical reflections going on inside the water. And that's because I have my flash turned on and it's catching some of the bubbles and other stuff inside the water, but otherwise, the turtle looks great. This is the before version, which we started off with and, and you might look at this and think this is an image beyond hope, but it actually turns out to be one of those images that all you have to do is apply a single automatic command.

So there you have it, a few different ways to apply automatic color corrections to photographic images here inside Photoshop.