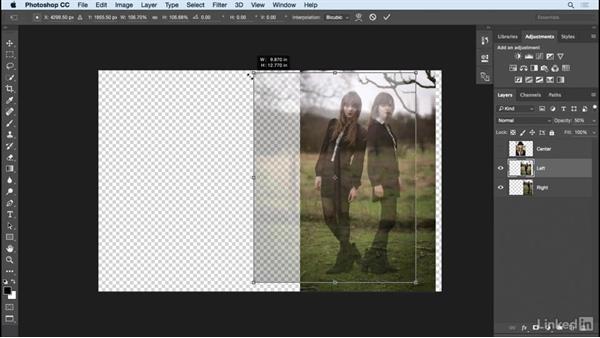 Seán Duggan shows the beginning steps of a typical compositing process for a portrait collage. He shows how to see composite possibilities, and then opens files as layers in Photoshop. He also explains how to use Canvas Size to increase the image area, how to rename and arrange layers, and how to use Free Transform to scale and resize layers to match subject size and placement.

- [Voiceover] In some cases the initial idea for a portrait collage can come from just looking at image thumbnails and rearranging them to see how they look next to each other. That was the case with this series of photos of this young woman. I really liked how her curved posture in the full length images created a balanced arrangement when placed on either side of one of the closeup shots. One of the things that I like to think of and keep in mind when envisioning how I might make a portrait collage is not just how the different images might work together, but also what the visual design and balance will be of the new image that's created from the different source photos that I composite together.

So I've opened these files up into Photoshop and I've arranged them in a single-layered file. You can do that via the Tools menu in Adobe Bridge. There's a command to load files into Photoshop layers, and there's also a similar command in Lightroom as well in the "Edit In" menu. So the first thing I want to do is rename my layers just to refer to the position in the collage that they're gonna occupy. So I know I want this closeup portrait of the girl with the bowler hat in the center so I'll just double click there and I'll call that one "center".

And this one here I want on the left side so I'll double click in that name, call that "left". And finally, this last image I want to put on the right side so I will rename that one "right". Next I need to add new canvas size onto the image to create the space that those full-length views are gonna occupy so I come up to the Image Menu and choose Canvas Size. And I'm gonna change my unit of measure here to percent and I'm just gonna add 225 percent onto the width.

I'm not gonna change the height. Down here in the anchor box I'm just gonna leave that set to the default position there, and that'll ensure that new extra width that's added will be added equally on the left and on the right side. And I'll click "Okay". Now I'm gonna move the layers into their relative position that they're gonna occupy. I'll start with the left layer, tap V to get the Move tool and just drag this layer over here. And then I'll get the right layer and drag that over as well. So the first thing that I'm noticing right now is that the image on the left is smaller.

The girl is a lot smaller than she is here on the right hand side so obviously I want to have her to be the same height. So I'm gonna End Tap the number five, set the opacity to 50 percent. I'm just gonna drag that layer over here. I'm just gonna align these so that her feet are roughly on the same plane there so it looks like she's standing in the same spot. And then I'm going to use the Free Transform tool which is Command T on the Mac or Control T on Windows. And let me actually zoom out a bit here.

I'm gonna hold down the Shift key and I'm going to very carefully, slowly drag up here on this corner to make her roughly the same height. That looks pretty good. I'm coming up about 106.85 percent, something like that. By the way, holding the Shift key down when you scale up on the corner of the Free Transform bounding box will ensure that the original aspect ratio of the layer is preserved so that she's not gonna get all stretched out of proportion.

I'm just gonna tap the Enter key to apply that and I will tap the number zero to set the opacity back to 100 percent, and I will drag her back over here on the left side and turn that center layer back on again. So at this point in the process I have my layers roughly arranged how I want and I can start to see how the composite might be working. I think this is gonna look pretty cool. But before I get too much further into the process, what I wanna do now is kind of take stock of things and see if there's any retouching that needs to be done or try to anticipate any potential masking challenges or problems that I might run into.

I'm gonna turn off the center layer here just to see what's going on. And you'll notice that there is a big empty area between the two images on the left and the right side. So for what I have in mind for this composite, that is potentially going to be an issue because I know that I want to get rid of this blurry background in the center portrait. I want the background to be kind of like the background that's behind the girl here in the full-length shot. So I'm gonna have to mask this out here and that's gonna show this big empty area here.

So what I need to do is I'm gonna have to extend the background of both of these shots kind of in towards the center to create some more detail there so that when I do mask out the blurry background in this shot, we're gonna see the actual background in these other pictures here. That's one thing I need to deal with. And then this branch is gonna look kind of odd. It's gonna look like it's sort of coming out of her side of her hat which could look cool on one image but not in this image.

So I'm probably gonna have to retouch this branch and maybe even this branch here. I think that the branches on the sides of the image in the upper right corner and in the upper left corner are probably gonna be okay, but definitely these ones in the middle I'm gonna have to retouch out. And then finally I noticed that in the center image, the closeup shot, that the photographer has cropped off the sides of her arms and the sleeves. They're just totally gone. So that is actually a good point to keep in mind when you're taking photographs for a composite, whether for yourself or for somebody else who might be doing the compositing work.

It's always good to leave a little bit of extra room on the edges there because that way it will allow us to create a much more natural and pleasing-looking composite effect here. So I'm gonna have to reconstruct some of the detail for her sleeves there as well. So the first phase of a portrait collage or really any compositing project: you arrange the images in a general position that is gonna be required for the finished piece and then with those layers in place you can evaluate where retouching may be required and also what type of masking or blending challenges may lay ahead.

5/11/2016
A collage is a common way to creatively combine multiple portraits into a single image. It's used for everything from family pictures to band publicity photos. But portrait collages are also a great way to show multiple "sides" of one person: a kid at play, an artist at work, or an athlete at the top of his game.

In this course, photographer, author, and educator Seán Duggan steps you through the process of using Photoshop to combine a set of portraits into a collage. He uses the compositing features of Photoshop, including layers, selections, masks, and Smart Objects, in combination with the transform and tonal styling tools for maximum creative impact. These techniques will help you build a new portrait collage from scratch and discover some new tricks in Photoshop along the way.
Topics include: