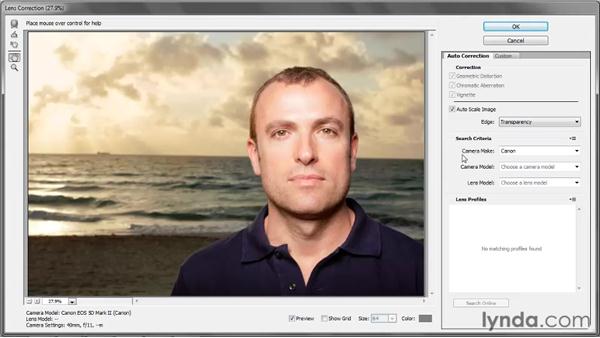 List are things off with a look at a feature that's been fairly dramatically enhance inside Photoshop CS five basically the EIDE chic and they'll automatically accommodate lens distortion associated with an image so everyone's out there has some degree of distortion associated with it. That's just the fact of capturing an image and it happens with the lenses inside of our eye is this well. It's just that her brain automatically accommodates that distortion. So as the light hits the lands that ends a bending basically.

Then it lands on the sea monsters CCD chip and the what you may end of seeing is some degree of warping associated with what on the perfectly horizontal or vertical lines inside your image. Now where this particular image is concerned that it happens to come to us from Felix busy outs the cost of tea for totally a image library about which you can learn more if the Tilia. com/teach in this image I'm seeing that we have a little bit of straightening issues, that is the rise in it is not quite exactly horizontal.

However, before I've fixed that problem, I want to make sure that we don't have any lenses torsion associated with this scene. So when you do is go up to the filter menu and choose his command right their lens correction and it's totally up to yield how often you use this command you could apply it to every single image right out of the gate in order to correct that image. And you may find that it provides a lot of corrections or not much at all and then he can decide what to do after that, if you tend to issue with the same camera in the same lands on her regular basis anyway let me just show it to you then you can decide how you said go and choose the command by the way if you have a big distortion problems associate with your energy and switch over to cost them and you can hand tool the image to whatever extent you like by the great thing in sight to see S5. It is that the command will do the work for you.

So what you need to do is first of all decide whether you can automatically scale the image and the answer she asked us go ahead and leave that checkbox turned on and what he given to do with any edge details that might occur in other words it if the image has to be pinched a little in word and fire shots I can know what to do with the right-hand edge and a left handed to the images well has the top and bottom of the skin of the undocumented pixels to essentially associate with those locations and what I suggest you do is later destroy and crop them away for now it is make those edge is transparent to the more porn options are down here, you need to specify your make of camera we age Photoshop should determine automatically and noticed down here in the lower left-hand corner of the screen we see they camera make and model and you may also see the lands documented.

But in this case the exit stated this not include the lens information so we don't know what lens whose shoes we know the focal length was 40 mm, but we don't know the exact make of Lance Price...go ahead and enter what we know into the search criteria here, we know that it was shy with the Canon camera we know the model is an Io 's five D.Mark two because that's what it says down there in the lower left corner saw go ahead and select that otherwise adjust you leave lens model set to all you could try to figure at exactly wild lands wish you used by in this case, I recommend just sticking with the all setting and note is that it has corrected for little bit of distortion all go and turn off preview. So we can see the original version of the image to see that the fellows had us a little skinnier on the right-hand side than it is on the left hand side is soon is a turn on preview to accommodate for the distortion in the right-hand side of his head his left- hand side of course widens slightly so that we each have a slightly more symmetrical face the aid seems to me to be a good thing now the devil he want to correct for geometric distortion chromatic aberration that I would go ahead and let lens distortion automatically accommodate that as well, because that's kind of a pain in the neck for you to try to fix manually a show you exactly how that works for me discuss Cammarata at the end of this particular course of the advanced course here for basically chromatic aberration is a misaligned and those scholars around the perimeter of an image anyway still a leave that checkbox on that's what I would do and then Vinny had finally and you can decide whether to do or not being yet would be some shading presumably around the outer edge of the image and you are one of bright man out if a achieving its cons by the lens itself. You would want a bright man up automatically and you can either turn this check box off to see if it is doing anything in my case is really not an intern and on again by the way they doubt just leave all three checkboxes on that's my advice, and then click okay in order to apply that modification so once again it's a fairly subtle distortion here by this is the before version of the image of our press controls the command see on a Mac and this is the after version of that image, after her perform that step I would go ahead and straight in the scene so I'll switch from my eye dropper tool over here to the ruler tool in the sod is straight back to the fundamentals portion of the series going to go and do it again because they need to wear this image is concerned all go ahead and drag a law aimed along the mean horizontal right there along the horizon that is and and all click on the straight and buy them in or to let Photoshop do its thing and we now have a corrected version of that scene in just so they can see what we've managed you here all with a high degree of automation bear in mind or go ahead and press the F12 key in over to refer at the image so that was the original version of the image that I downloaded from the for totally image library and this is the after version, which I give by pressing control see her commands he and a Mac bear in mind that you can undo a referred to inside Photoshop all thanks to the automated power of lines correction and as well as the ruler tool here inside Photoshop CS five