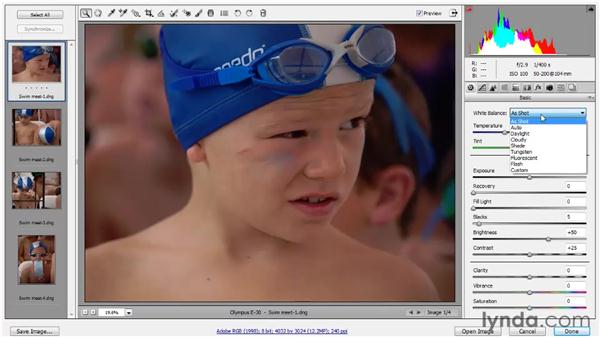 Over the course of this exercise and the next I am going to show you a couple of tasks that are handled much better by Camera RAW than they are by Photoshop itself, starting with White Balance. White Balance is a feature that is accommodated extremely well by Camera RAW and extremely badly by Photoshop. There is the Color Balance command. You may recall from our early color discussions back in the fundamental portion of the series. We've got the Color Balance adjustment layer, and we also have variations but that doesn't even work on the Mac these days.

It just works on the PC. Then you've got the Lab mode and that's basically it, whereas inside Camera RAW White Balance is handled beautifully as we are about to see. Also, Camera RAW allows you to modify multiple images all at once. So, as long as the images were shot under similar lighting conditions and using similar exposure values and so on, then you can apply the very same settings to a bunch of images in one fell swoop. You may recall Photoshop doesn't do anything of the kind. You have to edit one image at a time inside that program.

So, to get a sense of how this works go to the Bridge and make sure you have the Bridge trained on the contents of the 24_camera_raw folder inside the Exercise Files folder. Go ahead to select Swim meet 1 through and including Swim meet 4. So all four of these images here. I shot these toward the end of the Swim meet that my kids were involved in. The sun was going behind the clouds. So, it's essentially a cloudy day, which becomes important in just a moment when we started adjusting the White Balance. So I've all four of these images selected. I'll press Ctrl+R or Command+R on the Mac to bring up the Camera RAW window.

Notice by default just the first image is selected. So I'm seeing this vertical filmstrip of the various images that I had selected inside the Bridge, but just the first thumbnail is selected there. That will sometimes throw you, because I just naturally assume that Camera RAW has gone ahead and selected all of them. I don't know why it doesn't. In fact, I don't why that's not its default behavior. So, then I do start editing away inside the image and sort of first five minutes in the things I look over, and it dawns on me then I'm just modifying one image independently of the others.

So, I'll show you a workaround that actually works really great. I'll show you how to work both ways. So, for starters if you're sure you want to edit all of your images exactly the same manner, then go ahead and click on the Select All button, or you can press Ctrl+A or Command+A on the Mac. However, as I say I'm going to pretend that I forgot. So I'll just click on this very first thumbnail to select it independently of the others. Now, we are going to focus for the moment on these White Balance options at the top of the Basic panel. So, these are the very first options that you'll want to edit and Camera RAW is exceedingly well organized.

Now, those of you who are digital photographers and take your craft seriously, you might think of White Balance as something that you hard code inside your cameras. So, in other words you set your camera in order to read the White Balance at the moment in order to compensate for the light source. However, it's really just a metadata setting. These are the hard coded elements of a photograph. That is to say these items that appear right below the histogram, and that is the aperture and the shutter speed, the ISO, and the focal length. Everything else-- and of course the focus as well, whether the image is in or out of focus.

Everything else is essentially a metadata setting that you can modify on the fly, and that includes White Balance. Now, the White Balance option starts off with this pop-up menu, and you can switch to a different light source. For example, you could choose Tungsten which is a very warm light source, and that's going to cool down the image. Then if you switch to Cloudy, which is a cool light source, that is, bluish as opposed to yellowish, then that's going to warm up the image. Now, why in the world is that? Why in the world does that? Why is the cloudy day warming up the image and Tungsten, which is a very warm light source, is cooling down the image? Well, that's because we're applying compensation.

So in other words, Photoshop is seeing tungsten and it saying, "okay, that means that the image is a little on the warm side. I need to cool it down in order to neutralize that color cast. Whereas if it's a cloudy day and it's a cool light source, then I need to warm the image up in order to compensate once again." That's going to change your Temperature and Tint values down here. Now, here's what's going on with temperature and Tint. These values, which are exceedingly useful by the way and beautifully presented. Very easy. These are perpendicular axis across the big color wheel.

So, remember that color wheel that goes from red to orange to yellow to green and so on all the way back around to red again. I've showed you what that color wheel look like a way back in the fundamentals portion of the series. Well, if you are to draw a line right through the center bisecting that circle. One of the lines would be Temperature. So you could draw a line from yellow to blue, for example, across the wheel, and then if you were to draw perpendicular line, that would be Tint. So, the way that you start things off is you go ahead and adjust your Temperature value, essentially to compensate for the light source, and then you adjust your Tint value to compensate for your temperature modifications.

So, you can make the image ultra bluish, if you want to and by the way, this value here, this numerical value, is degrees Kelvin. So, a 2,000 degree color temperature here is a very warm light source and so we are cooling the image down to an incredible extent. Then if we were to cool the light source down, then we would warm up the image like so. You can also see that you're going to cool down the image here on the slider, because it turns to a blue on the left-hand inside and toward yellow on the right-hand side.

It's more of an orange really over on the right-hand side as you can see. Then once you come up with a Temperature value that seems to look good here inside the image window, then you compensate with Tint, which is going to vary between sort of greenish. It's really more of a turquoise, and then sort of magenta on the other end. You'll hear people call it magenta anyway. It's really more of a pink. The reason that I steer clear of the terms green and magenta is because green and magenta have very specific meanings in the world of digital color, whereas turquoise and pink are ultimately subjective.

And by the way, I am making subjective modifications. So, I'm just watching my image here inside the preview and adjusting accordingly. Now, you are going probably, typically that is, make pretty big modifications where Temperature is concerned, and then you are going to make very slight modifications, between typically -10 and +10 where Tint is concerned. However, for demonstration's sake I'm going to apply a very cool Temperature value, not modify the Tint much at all. So, I have a very bluish version of this image, and I can clearly see now, if it dawns on me to look over here in the left-hand inside the screen, that I've modified Swim meet 1.dng independently of 2, 3, and 4.

Well, I am going to show you how to experiment with different White Balance settings as well as how to select and synchronize your various images here inside Camera RAW in the next exercise.