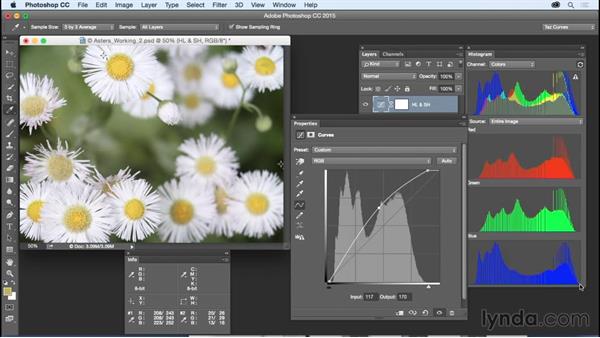 - In the second project, we're going to continue where we left off. In our first exercise in this chapter, we adjusted the highlights and the shadows of our Asters_Working image. Remember we created this curved adjustment layer and we did highlight and shadow adjustment by creating our highlight and shadow points. We got the critical highlights and the deep shadows and then we used our numerical analysis to set them. What we're going to do now is follow up with a little bit of brightness and contrast adjustment. Particularly working with curves, this is the order in which you really want to proceed.

Is do highlights and shadows first, set those two points so that the data is spread out and notice that we come over here and we analyze what we've done already when we look at the more detailed histograms over here. When we apply the analysis, we turn on the eye either there or here, either one. We can see that our data is spread out. The blue is spread out more than the red and the green and that's because there's a blue color cast in this image. More on that later. But you can monitor what is going on with your histogram As you go along by seeing what happens in this histogram panel over here.

Alright, so we spread out our data to get a little bit better overall brightness and contrast. Now, once we have those two points, those two critical in-members, if you will, the highlight and the shadow set. We can come in and we can grab the mid-tone. The mid-tone where we set the highlight and the shadow. And so we'll take this right about here. We can raise the middle of this curve. And notice I'm just doing it with my mouse right now. And a lot of times, I'll make an initial movement with my mouse, and then, once I've done that notice it creates a control point in the middle of the curve.

Then I can take my up and down and left and right arrows to actually move the position of that curve. Now all the while I'm going to be monitoring the image and I'm also going to be monitoring the histograms we see over here. Once again, let's move our Properties over so we can help see the larger image and put it right next to those histograms. And notice as we move this curve up, you see how all of the histogram data marches over to the right. Now I'm going to go way overboard here.

And it's definitely easy to go too far and an image like this we'll probably want to push our highlights over until the blue value just knocks up against the edge of this. If we go too much further, we're really going to be brightening this image too much. So let me just review that again. Hit the DEL key to remove that point, we click on the mid-tone and then here I just use the arrow key, the up arrow key, and we can see that that data starts to march over to the right. And notice there's no movement of the data here.

This histogram remains constant. Where we see all of the action, is over here in this histogram. So we can increase the overall brightness of the image, and very often, a little bit goes a long way. I'm just using my down arrow now. And if we do an overall darkening, we can move it down, but we want to move it up just a little bit. I'm doing it right from the mid-tone. So just as that blue starts to hit there. So we get a dramatic increase in the overall brightness of the image by doing just that. Now notice that I'm performing this on the original curves, which applies this on top it, which is fine.

The other option that we have, let's delete this control point and come back over here and just create a second curves adjustment layer. In this case, I'm going to hold down my option key, ALT in Windows, as I click this icon and this allows me to name this and this works throughout Photoshop, you hold down that option or ALT and you have the option or alternative of naming something that you are about to create. So we're going to call this the Contrast curve. And instead of the curve, or the adjustment to the original curve, if you create a second curve here, then we can isolate the two adjustments a little bit easier to compare what each one is doing.

So if we create a second curve here we can bump this up to improve the brightness and then notice that by turning this off and on, we can see a dramatic improvement in the overall brightness of the image. What we couldn't accomplish with just the highlights and shadows, particularly because there was a color cast, we can now add a substantial amount of brightness to this image. But remember, a little bit goes a long way. We want to make sure we don't overdo this. And if we want to go one step further, we can go to the 1/4 tone. We can bounce the 1/4 tone up to improve the brightness of the highlight area and we can go to the 3/4 tone area and move that point down, I'm using the down arrow key.

Remember, we could have assigned this and applied this to the original curve, we just chose to separate the two so we could compare both moves that we made.