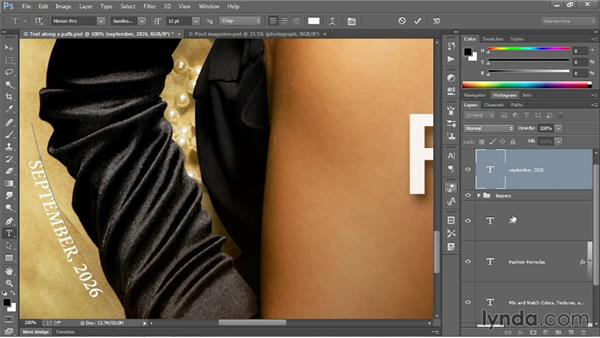 In this movie, I'll show you how to use a formatting attribute called Base Line Shift, to adjust the vertical alignment, of text on a path. Notice how my Type Tool is still selected, which means that I can go up here to the Options Bar and click on this little Panel icon, to bring up my Character Panel. And then if I hover over this option right here, you can see that it reads set the base line shift. And incidentally, all of these values are scrubbable, meaning that I can raise the value by dragging it to the right. Or I can lower the value by dragging it to the left.

If I take that value up to let's say 16 points, I move the characters up from their curving baseline. Now, if you encounter this issue where the path outline becomes invisible, then you can just click inside of the text, to make it reappear once again. And notice now that the letters are moved up from that baseline. And this can be useful not only for aligning text in a path, but also for setting the numerator in a fraction or when creating ordinals, like DND in second. But in my case I want to move these letters down, so I'm going to press Ctrl+A or Cmd+A on a Mac in order to select the letters.

And I'm also going to press Ctrl+H or Cmd+H on a Mac to hide the highlight. And now I can move the letters down from the keyboard, by pressing Shift+Alt+down arrow, that would be Shift+Option+down arrow on a Mac. And that's going to reduce the baseline shift value in one point increments. If you want to modify that value to five point increments, then you press Ctrl+Shift+Alt+down arrow or Cmd+Shift+Option+down arrow on the Mac. Similarly, pressing Shift+Alt+up arrow, or Shift+Opt+ up arrow on a Mac, is going to move those letters upward.

If you want to move them up in five point increments, you press all of the modifier keys, so Ctrl+Shift+Alt+up arrow. That would be Cmd+Shift+Opt+up arrow on a Mac. Anyway, I'm going to do whatever it takes in order to get that value down to negative 8 points, like so. And that'll move the character so that they're directly under the baseline. Now notice that, with the Character panel open, I can see this value right here, the horizontally scale value is set to 110%. I don't want that, so I'm going to click inside that value and press Shift+down arrow in order to reduce the value by 10% which takes it down to 100%.

Which is what I want. And now I'll just go ahead and close the Character panel. I also want to add a drop shadow, so I'll press the Enter key on the numerical key pad, in order to accept my formatting modifications, and if you're working on a laptop then you press Ctrl+Enter or Cmd+Return on a Mac, and then I'll click on the little FX icon at the bottom here, choose Drop Shadow, and most of these default settings are just fine. And I'm going to take the opacity value up to 100% though. And I'm going to select some other color than black. And that's because the black looks pretty muddy.

We're going to have better luck if we select a color that's native to the image. So, I'm going to click inside this black swatch. Move the color picker over a little bit. And the click inside the image with this eyedropper. And that'll go ahead and lift that color. And that's almost right. I'm going to take the hue value down to 30 degrees. I'll take the saturation down to 50 percent. And I'll take the brightness down to 20 percent. And then I'll click OK. And we have this, I think much better looking drop shadow right here. Now I'll click OK again, in order to apply the drop shadow. And then finally, I need to rotate this text a little bit.

So, I'll go up to the Edit menu And choose Free Transform Path which has a keyboard shortcut of Ctrl+T or Cmd+T on the Mac. Now you may say wait a sec, haven't we been using Ctrl or Cmd+T to bring up the Character panel? And the answer is yes. Photoshop's keyboard's shortcuts are contextual. So, if text is selected. Pressing Ctrl or Cmd+T brings up the Character panel. If the text is not highlighted, which it's not in our case, then Ctrl or Cmd+T, applies to free transform command. Anyway, I'll go ahead and choose it and then I'm going to drag outside of the bounding box until I get a rotation value.

Of about 3.5 degrees, is what I'm looking for, so there we go. And I'll also press Shift+right arrow, in order to move the text ten pixels to the right. And notice that we're not seeing the text move at all. I've been modifying the path, which we can see. But the text is not responding, nor does it until you press the Enter key, or the Return key on a Mac. So you're kind of working blind with that one. And finally, I want to move the text down, and I'm going to do that using the arrow tool. So I'll go ahead and switch to the black arrow.

And then you can drag the text down on its path outline. Just drag it directly down until you get it right about there and then you can switch back to your rectangular marquee tool in order to apply that modification. And that's how you use base line shift along with a few other options to modify the placement of text on a path here inside Photoshop.