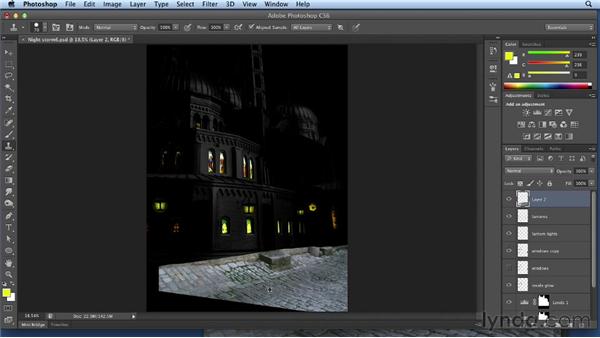 Join Bert Monroy for an in-depth discussion in this video Adding sidewalk, part of Creating Dreamscapes in Photoshop: 2.

Now what this scene needs is a sidewalk. We got the building, but it's gotta be standing on something. And we need something kind of fitting of this mideval kind of a look that this building has right now. Well look what I've got. Yet another vacation shot which is fairly worthless as a really a piece of art. But, look what it has, it has a great sidewalk. Unfortunately, back in Midieval times, they didn't have these kind of sores. That the manhole cover there just isn't quite going to work. So, the first thing we gotta do is get rid of it. Not that hard.

I got my clone tool here. I make sure that I have a nice hard edge to it, about, 90 would be good. And, I come in here and I will go right next to it, right here I'll say option click clone from there, and come right over here, and start to cover it up. And there we go. It's gone. That was pretty easy. We'll just kind of lighten it up a little bit tehre and our sidewalk is now old again. Now it has these great little steps which is really fortunate because look we have doors there.

Right? So those steps are going to come in really handy. So now what I'm going to do is I'm going to come in here and I'm going to select this sidewalk. So I'm just going to go in right through here, this whole thing, and just select this entire sidewalk. Right there like that, Okay, so now that I have it, I come over here and I want to make sure what the layer I am on here. Okay, so, right underneath the(UNKNOWN) go right to the top. Right, so now I know where I am, I am going to go to that file of my pavement and drag that into here into the file. There it is.

Sidewalk's in place. So now, let's put it down here in position. And it's a little bigger than we need. So what I'm going to do is I'm going to go in there and make a little adjustment. I go into my transform tool, and we'll put it right into position right down here. And I'm going to have to skewer it a little bit, so I'm going to hold down my Cmd + key so I can do a little skew, follow the angle of the building that I have, right there. And bring it down, right to about here, where I, just about where I need it. Maybe let's just bring say this step into here.

Let's go with that step. We'll make it a little bit smaller, just a little smaller just like that. And a little tiny more skew right there. Alright, so there it is in position. Now, this foreground stuff, don't worry about it because that's going to be fairly dark in that area there. So, let's just move it back, just a tad so it's matching that little doorway right there. And we'll do one more little adjustment just to skew it just a little more. Just to fit that scene much better. There we go. So now it's working better.

So I'm going to go in here and just clone some of these steps right here into this area just so that we kind of fill it up now. Like I said, it's going to be fairly dark in there. You're not going to see a lot of this stuff, but I'm just going to go in there and add some steps. Right into here so it closes it up. And I'm going to pick up, in fact let's just do it this way. I'm going to select this portion right here and I'm going to to copy that over to this area here and enlarge it so it's going to fit better into that area. So I'm just going to go in here, and from the center out enlarge this little part of bricks, put em in position, right about where I want em, a little bit bigger. And click OK, and there's some additional bricks in place. Now it might not quite be the right angle, so let me undo that selection. Go back into my transforms, and we'll skew it just a little, like that. And there we go, that's fitting up our sidewalk there, that's looking good. And again, it's going to be dark so you're going to lose a lot of this detail.

Over into this area here. So that we have some sidewalk up on this part of the building. And I'm going to go in the air and do a little transformation on that. We're just going to kind of drag this down and bring it over. Just so we have this sidewalk on this part of the, the building right there. 'Kay, there we go, click OK. So now, we're going to take this guy and merge it down, and we'll call it pavement. Alright, so now, we're going to give it a mask, so that we can mask out the parts that we don't want.