Adding motion to text (or any layer) 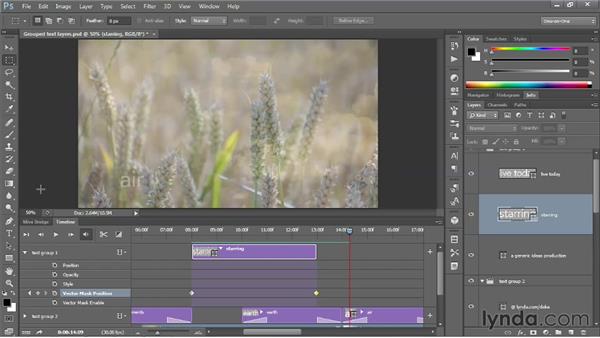 In this movie I'll show you a couple of different ways to add motion to a text layer. And these tricks work just as well if you're working with a vector-based shape layer as we are as well as a pixel based photograph. So you can pan and zoom any still are you like inside your movie. So if you are working on with me, find the starring layer somewhere inside the layer's panel. And then press C up here or key, in order to advance to the beginning of that layer like so. And just so we can better see what we are doing. I'm going to remove the transitions.

And you do that by right clicking on a transition, and then clicking on the little Trash Can icon, and I'll do it for both transitions of course. Alright, now I can see this starting layer. Now it occurs to me that it's getting a little bit lost in the shuffle. So I'd like to add just a little bit of motion to call attention to it. And here's one way to do it. This is the more laborious method, but it also gives you the most control. First thing is, you click on this little arrowhead, right there in front of the word starring.

And then you get access to all these tweening options. Photoshop will automatically move a layer between two positions, or change the opacity of a layer between two extremes, or change the style, that is to say the layer effects for example. Now normally we'd work with this position option here. But that won't have an effect on a vector-based shape layer because it essentially moves the color inside the layer independently of the mask, which remains stationary, so that's not going to do us any good. Instead what we want to do is alter the vector mask position. So with your playhead right there at the beginning of the text, go ahead and click on the little stopwatch icon, and that'll go ahead and add this diamond-shaped key frame indicator.

Next thing you want to do is press the down arrow key to advance to the end of the text and then click on this little diamond over here on the left side of the screen in order to add another key frame. Now this'll be our end key frame, the other one's the beginning. We're going to leave the beginning key frame alone. We're just going to modify the end position. And I'll do that by pressing the Control key, or the Command key on a Mac, to temporarily get the move tool. Don't drag the text directly because you'll mess up the vector mask. Instead, drag outside the text, and as I'm Ctrl-dragging or Cmd-dragging on the Mac, I'm also pressing the Shift key at the same time, in order to constrain the movement to exactly vertical. And I'll go with, about 180 pixels is just fine. Now, press the Up Arrow key again, in order to go back to the start position. And press the Space Bar in order to play the text effect, and you can see that the text is, indeed, moving across the course of the five second set it appears onscreen.

Alright, that's one way to work and like I say that one gives you the most control because you can determine exactly the beginning and ending points. If you're working live editable text or a pixel based layer then you have a simpler option in which Photoshop takes over the control. Let me show you how that works. I'll go up to the file menu and choose the revert command in order to restore the same version of the image and I'll click on the starting layer once again press the up arrow key in order to advance to the beginning of that layer and I'll go ahead and zoom in a little bit as well. Notice this item in the timeline does not contain a little arrowhead in its upper right corner the way that say the movie clips do. It would if it was an actual text layer or if it was a pixel based layer to make that happen with the vector layer you have to first convert it to a smart option but if I do that then I'm also going to gobble up these transitions inside the smart object which would give me less editing control later on down the line.

So what I recommend you do is right click on each one of these transitions and delete them by clicking on their trash icons, and then converting the layer into a Smart object by clicking it. We need to make sure it's active here inside of the Layers Panel, and then go to the Panels Fly out menu and choose convert to Smart Object, and just like that we now have that little arrowhead... At this point, what you can do is click on the arrow head to bring up these motion options. By default it's set to No Motion, but you can go with Pan and Zoom in order to move and scale the text.

All I want to do, however, is pan it. Now, if you resize it to fill the canvas, it's going to be gargantuan. It's going to take up the entire movie, which is not what we want. So go ahead and turn that item off. And then, we want the text to move straight down, which means it needs to be negative 90 degrees. And you can just type that in if you want to. And that's all there is to it. Now, if I press the enter key, or the return key on a Mac, in order to accept that change And I press the Space Bar, you can see that the text moves down, albeit a shorter distance than I had it moving when I set the controls manually.

All right, now we need to add back in the fades of course, so click on the little Transition icon, grab Fade, drag it and drop it onto the beginning of the movie and onto the end of the movie, and now let's see what that looks like. I'll set the playhead over here to around seven seconds. And press the space bar, and now we can see this text moving down and then eventually fading out like so. And that way, we call attention to the text without adding some over the top garrish effect. So there you have it, two ways to add motion to otherwise stationary layers inside Photoshop. Either by taking the manual approach which gives you more control or by taking the automated approach and letting Photoshop be in charge.

3/27/2013
Join industry expert and award-winning author Deke McClelland in the fourth and final installment of his popular Photoshop CS6 One-on-One series. In this course, Deke puts his own spin on the most powerful features in Adobe Photoshop, including the Art filters, which enable you to transform an image into a digital painting, and Photomerge, which can stitch together multiple photos into a single panorama. Plus, dive into the extended features like 3D lighting effects, the Puppet Warp and animation toolset, high dynamic range (HDR) imaging, video editing, automated adjustments with actions, and much more.
Topics include:

Video: Adding motion to text (or any layer)