Adding the man and a shadow 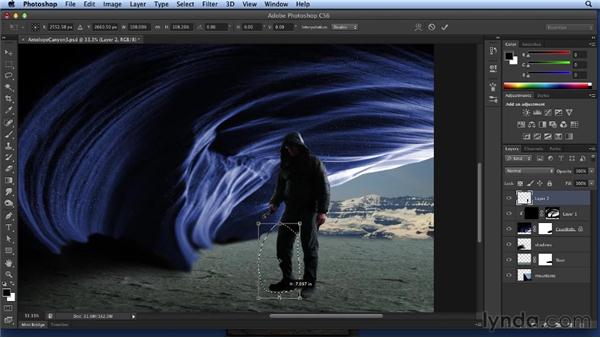 Join Bert Monroy for an in-depth discussion in this video Adding the man and a shadow, part of Creating Dreamscapes in Photoshop: 2.

So now we're going to add the man. Before we do, step back and look at it and we see that there's a slight halo along this edge. And that's where we're getting that little smudge and the little anti-aliasing from the the cave, against this darkness of the shadow. So you know what I'm going to do, I'm going to go over to that layer of the cave and I've locked the transparency of it and with black, I use a nice big black brush. I'm going to go ahead and fill that area. You can see that it's just filling it up, right there, with the black. Now that's good because later on. I really need this to be very dark, so what I'm going to do is I'm going to bring that transparency to about 50%, make the brush a little bigger. And just start adding a little more black into that area, just to make it really dark in the cave in that little spot, because like I said a few minutes ago in the last movie, there's going to be something happening in this little spot right here later.

Alright, so now we're going to put the little man in there. My friend Bill, one of my hiking buddies I asked him to wear one of his winter hiking jackets and have a flashlight and so I could shoot him for this. Now I don't have a big fancy studio, like I said, or big backdrops I'm a photographer so I don't need one of those. But my neighbor across the street, has this nice big white wall with a white garage door, and I thought if I stick my friend Billy, there, I could shoot him. Alright, so, that's right there. Now, I'm going to separate him from this background, I'll do it with a path. So, right here, I have this particular file where I've already separated him from the background.

So you can see where he was before, so I'm just going to close that file, and here he is separated from the background. And it has a path, has a path already set up for him to pull him out from the background. I'm going to go in there and turn that path into a selection, and I'm going to drag him out here and put him into our scene here. And there he is. Now he looks like he's being chopped off at the bottom. That's because he fell inbetween these two layers and since that layer above was clipped. That is automatically clipped, so I'm going to put 'em on top, and unclip em, by holding down my Option key and clicking in between there like that.

And now he's full, there he is. So I'm going to put him in position where I want him, and I'm going to shrink him down a little bit. Gotta go in there, and go and shrink him down. I like that, that's about the size that I want maybe a little bit smaller smaller there. Let's put him right about there like that, and have him standing right there, that's good. Now if you looked at the scene where he came from he's standing on an incline. So you see how his leg is a little to high up? Well looking at the Angling with we're looking at.

And fill this in. And get a much smaller brush. So we have a little more control, and we'll just bring some of these darks in here, bring some of this. And just were going to close up that little hole that was created there. And then we'll just come from this side and bring this up into there. And close it up and there we did a quick tailoring job there and fixed up his pants. There we go. So now, now he's complete again. Alright, coming back, he's a little light, so what I'm going to do is I'm going to go in there into my levels and I'm going to kind of darken him a little bit. Cause he's inside our cave.

Just like that. And I want to darken him up just a little more, so with my Burn tool and I have much smaller brush size and I'll go ahead and darken this front part of him just so it's really dark. And the same thing with his hand, just darken him up. So now, he's in complete shadow of the inside of our cave. Now, he needs to be casting a shadow, just like the walls of the cave are casting shadows. So, I'm going to give him a drop shadow, because that way I don't have to figure out how it's going to look, no. He's, a particular shape, so by going in there and say, giving it a Drop Shadow, and clicking OK, I have the basis of my shadow.

There it is. So I'm going to separate the shadow from the layer by going into Layer Styles and coming down here to Create Layer. And, I've got my shadow right there, which I can now go in there and modify it. So let's just pull back a little bit, so we can see our whole image here. And I'm going to take that shadow, and I'm going to just do a little transform on it. See there's the transform. Alright so, we have our transform controls, which is, Cmd+T is the shortcut.

So I'm going to grab this side right here, and I'm going to hold down my Cmd key, so that way I can manipulate sides independently. I'm going to drag this down, and drag this one down. Drag this one, and drag this one over so it's matching his feet, and just about like that. There we go. Click OK, and we have ourselves a little shadow on the ground being cast by the Billy as he's coming into the cave. Now the little piece showing in the back there. No problem. We can go to that shadow and we will erase that little chunk right back there.

Just so it's coming right from his foot. And there we see that we have this nice shadow, emanating from him, going down the floor of the cave. And the next movie we're going to add a little light to that flashlight.

Video: Adding the man and a shadow