Adding a flock of birds with the Pen tool 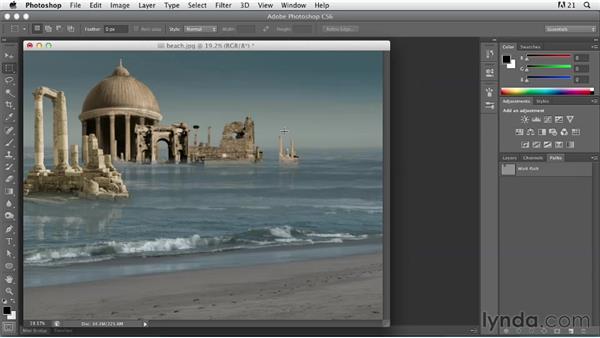 Join Bert Monroy for an in-depth discussion in this video Adding a flock of birds with the Pen tool, part of Creating Dreamscapes in Photoshop: 1.

And now for the final thing that we need to add to our little Atlantis rising scene, and that's a little flock of birds just flying off through the sky here. It will kind of round out the composition and just give it some life. So I'm going to go in here and create my bird. So I'm going to create new file and its size, in fact let's just see what we're going to-- 240 DPI in this particular file, so I'm just going to work with a low res, it's okay, no problem because it's going to basically be a brush, so let's make it 72 DPI.

And then the body that's coming around, like so. and then give it a little beak right here, come back and to fully understand what I'm doing you can watch the movie on the outlining the plane in the Crash Site movie, there you'll get an idea of how I was manipulating these little paths. So let me just go in here, and now start to modify this just a slight bit, I'm going to just to make my bird look kind of nice. I want it to be a happy little bird here.

Okay, now this can go away. We don't need it anymore. We don't have to save it. So back in this scene here and then go to my Layers, and way in the front I'm going to create a layer, and I'm going to call it birds. I get my Paint Brush, I'm going to select the little flock of birds--or rather the single bird which is going to become a flock. So there is the little bird, which right now is going to do that.

And go to a very light lighter gray, let's say about like that, don't want to go too light just so we have enough of a shift between those, and then now that we have that, we have a good size. I'm just going to go in here and just draw right across here and do a couple of those strokes so that we have a little flock of birds just flying through the sky there, and there we see that we now have the completed scene of Atlantis rising from the sea.

9/18/2012
Discover how to use Adobe Photoshop, without any added fine art skills, to modify artwork and turn the ordinary into extraordinary. Author and illustrator Bert Monroy takes an unexciting photo and transforms it into an amazing dream sequence by combining it with other photos and techniques. His process touches on compositing, digital painting, masking, and other key image editing techniques. All you need is Photoshop, some images that could use a boost, and your imagination!
Topics include:

Video: Adding a flock of birds with the Pen tool