Adding and editing points on a curve 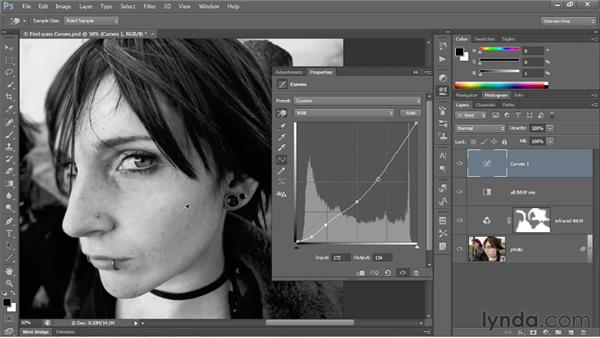 Join Deke McClelland for an in-depth discussion in this video Adding and editing points on a curve, part of Photoshop CS6 One-on-One: Advanced.

In this movie, I'll show you how to add and edit points inside curves. I'll start things off here by double-clicking on the thumbnail for the Curves 1 layer; that brings up Curves inside the Properties panel. And I'm also going to drag this black triangle back to the far left-hand side of the graph, and that's because you can typically achieve more control over your shadows in particular by adding points along the left-hand portion of the graph, and I'll show you what I mean in just a moment. But first, I'm going to scroll the image over so that I can better keep track of the woman in the foreground here. And now I could just click at some point inside of the shadow region here in order to set a point like so.

And so in my case I've set a point at Input 32 and Output 16, so I'm taking any shades of gray that formerly had a luminance level of 32 and I'm darkening them to 16. And that's just by virtue of the natural curvature of the graph so far. All right, let's say I want to modify that point. Well, I could drag it of course if I want to, or I can modify the numerical values, but typically the easiest way to work is to press the arrow keys. So if you press the Left Arrow Key, you're going to nudge the Input value down, and if you press the Right Arrow Key, you're going to nudge the Input value up.

Now, at first that might not make any sense, why left for down and right for up? And that's because you're moving the point back and forth to either left or the right. And the more you work with it, the more you'll get a sense of what's going on there. And so I'm going to go ahead and scoot this Input value over to 30. And then if I press the Up Arrow Key, I'm going to raise the Output value. And if I press the Down Arrow Key, I'm going to lower that value. And in my case I want to take that value down pretty darn far, to an Output level of 10.

So that darkens up the shadows considerably, but it also takes away some of the detail inside of the hair. So what I need to do is lift the brightness of the lightest hairs, but first I need to find them. And the easiest way to find luminance levels inside of an image is to take advantage of the bouncing ball, and here's what I mean. You switch over to your Target Adjustment tool, so that same tool we saw at work with Hue/Saturation, and Black/White is available to us with curves as well. And by the way, if you loaded dekeKeys, you can get to it by pressing the K key.

And then notice, I want you to watch this dark section of the curve right there, you'll notice the ball bouncing back and forth as soon as I move my cursor over the dark hairs. And I want to emphasize, I'm not dragging, I don't have the mouse button down, I'm just moving the cursor around. And so right about this point I think I'll click in order to set a point. So notice as soon as you click inside the image, you've set a point in the graph, and in my case the Input value is 61 and the Output is 27, I want to go ahead and back off that Input value to 60 and then I'm going to take the Output value up by pressing the Up Arrow Key several times until I get a value of 35.

That ends up brightening that shadow detail inside of the hair and elsewhere throughout the image. And something that's very important, by the way, if you want to get a sense of what the values actually are, if you're not seeing your values change properly, that's because you've left your cursor outside here inside the image. And so for example, I'm seeing Input 172 and Output 134, that doesn't have anything to do with the selected point; that has everything to do with the location of my cursor. So you need to move the cursor back inside the panel, like so. All right.

Now, I'm going to switch to the next point, the one that I've already created in advance here at the center of the curve. And I can get to it just by clicking on it of course, but when you click on a point, it's very easy to nudge it, to move it to a new location, so oftentimes it's preferable to cycle to a point from the keyboard. And here's how you do it, you press the Plus (+) key to advance to the next point like so. So if I press the Plus (+) key a second time, I would advance to that final point. if I press it again, I'll advance to the very first point in the graph, and so forth.

If you press the minus (-) key, you'll back up through the points. And I love this shortcut, because notice if I click on the panel, then I deselect all the points and now I can make any one of the points active anytime I like just by pressing the Plus (+) key, and that will go ahead and select the very first point in the graph, that is the point in the lower left corner, and then I'll advance onward. All right. So I'll press Plus (+) enough times to get to that center point right there, and then I'm going to press Shift+Right Arrow to move that Input value in the increments of 10, and eventually I want that value to be 155.

And then I'm going to press Shift-Up Arrow a couple of times there in order to raise that Output value ultimately to a 110, so you may have to press the Up Arrow Key a few times by itself as well. And that ends up brightening the midtones just a bit. And then finally, I want to brighten the highlights a little, because they've gotten dragged down by this midpoint here. And so once again, using the Target Adjustment tool, I'll click inside a highlight inside the eye, for example, in order to set a point, in my case at 225, with an Output of 206.

And in order to see those values, you're going to have to move your cursor inside the panel, and then I'll press Shift+Right Arrow in order to nudge that Input value to 235, and I'll press Shift+Up Arrow a couple of times, and then Up Arrow a little more to set the Output value to 230. And so just so you can get a sense of what kind of difference I made there, I'll go ahead and press the Ctrl key or the Cmd key on the Mac and click on that highlight point in order to delete it. So Cmd+Click or Ctrl+ Click on a point deletes it. This is how the image looked without that point, and then if I press Ctrl+Z or Cmd+Z again, this is what the image looks like with this point.

All right, that's the extent of our graph right there. So I'm going to go ahead and hide the panel and then zoom out and scroll over just a little bit. And so just so you have a sense of what we've accomplished, I'll turn off that Curves 1 layer. This is the image as it appeared when we finished working on it back in Chapter 20, and this is the new deeper, darker, more dramatic image, thanks to our addition of a Curves Adjustment. Now, I just want to say one more thing before we quit this movie here, even though I just got done closing the Curves panel, my Target Adjustment tool remains selected, and that can get you in trouble or at least provide unexpected results if you, for example, think that the Rectangular Marquee tool is selected and you begin dragging inside the image and you get an effect like this one here.

In which case just go ahead and press Ctrl+Z or Cmd+Z on the Mac to undo that change, and then press the M key to switch back to the Rectangular Marquee.

Video: Adding and editing points on a curve