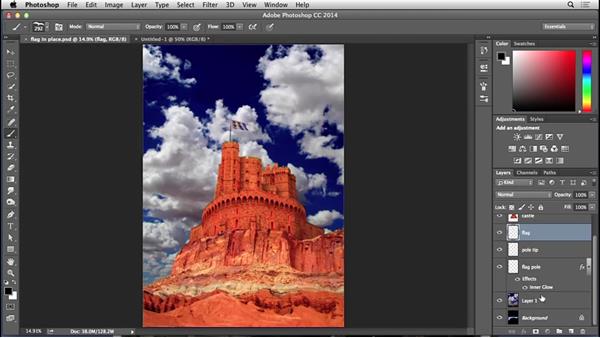 Join Bert Monroy for an in-depth discussion in this video Adding the birds to final castle scene, part of Creating Dreamscapes in Photoshop: Castle on the Mountain.

There, that's a good size. Make sure it's completely hard. There you go. And going to go in here and start to draw my little birds. So I'm going to draw one little bird that kind of looks like this. And I'm going to have little wings coming down, like so. This is very similar to the bird that I created in Dreamscapes one, going to look just like this. There we go. We give it a little head right through there, and a little tail in back. Okay? That's one little bird. Now we're going to create a second bird. Need a little smaller brush. This little bird is going to have a different kind of a shape.

Okay, this little bird is a little more towards us, though he's going to have wings a little more visible like that, and we just fill them in. You can make yours as cleanly as you want or you can even take existing birds to make the brushes, just make sure that the when you select it that the bird is isolated against the white background so that everything around it will be transparent. Here we go. And we add a little head, and we add a little body and tail, right back here. There we go. Now that's a pretty intense looking wing, so what we'll do is we'll just go in there and just very lightly shape them out a little better.

So we'll just kind of go in there and just kind of get rid of some of this stuff right in there, like that. And some of this. Okay? We can refine this any way we want after the fact. There we go. So we have two little birds. So I'm going to select the first one, right there and define that as a brush pre-set. And we'll call it, bird1. Then we'll select this one. And define that as a brush preset, and we'll call it bird2. You might say, what's the point of naming them.

You don't see any names there, well if you were to look at this as a say small list, then you'd see the names. See, bird1, bird2. I personally prefer to see the small thumbnails, so I can see what they look like, but there's our two birds. So now, we can go back over here, and go back to our flag and place file. Let's go way back here on top of the sky. And I'm going to create a layer, and we're going to call it the birds. Lets get a little closer so we can see what's going to happen next.

Now what color do we want our birds to be? Lets say their going to be kind of in the browns, like, golden eagles or something. So I'm going to pick some brown tones, so I'm going to go in here and pick a nice dark brown, like this, and, for the background, I'll pick the same brown, but a lighter version of it. See about like, that, not too much lighter, I don't want too much variety. So there I get my brush and I say use bird one right there which right now is a big bird flying across the sky like that. What we're going to do is go into our brush engine and give it a lot of spacing, make this size way down and then we start to see a couple.

And it's still kind of big, let's a little smaller, there's a few. And then we're going into shape dynamics now, what we're going to do here is give him a little size jitter and make sure there's a minimum. So they don't get too small. And then the angle, we're just going to play with that just a little bit. See? Not a lot. We don't want any birds flying upside down. We're just going to give it a little variety like that. Now that we have that, look at a little scattering as well. So on both axis, we'll go in there and start to scatter them away from each other. Now that we see what they look like down there we're going to give it a little more spacing.

Click OK, and right up here in the sky now we can see there very tiny. Let's make it a little bigger and we'll just draw a couple little birds flying across up there. See? They're all the same color, so one more step that we forgot. Let's go back over here and the color dynamics. Foreground and background, we will have a saturation and brightness jitter. That's so that there's a little variance to those two colors. Now let's try it. There we go, now we have some birds that are flying up there. There's one set of birds, just like that.

Then we get that second one. There's that second bird. And we go in there and apply the same effects to that one. We'll go into our brush tip and we give it the spacing that we want, lot of spacing. We go into our shape dynamics and we set up a size difference at a minimum, and we set up a little bit of an angle. Just a tiny little bit. And we do our color dynamics. Click OK, and you could put these in a separate layer, or just go in here, and do it in the same layer.

Come down in size, and we draw this second bunch of birds, and you can see that it starts to ad a little variety to the birds. So it doesn't look like it's the same bird flying all over the place. And we pull back, there we have the completed scene, right here.

9/10/2014
Behold the castle on the mountain. Join Bert Monroy as he creates this dreamscape from a set of ordinary images made extraordinary with Photoshop. He combines two real-world castles into a more elaborate fortress, and then adds it to a different landscape and sky. He performs some levels and tone adjustments to make the composite seem more natural, and then creates a few other elements—the flag and birds—from scratch. Follow along and learn how to create your own castle in the sky.