678 Reversing the direction of your illusion 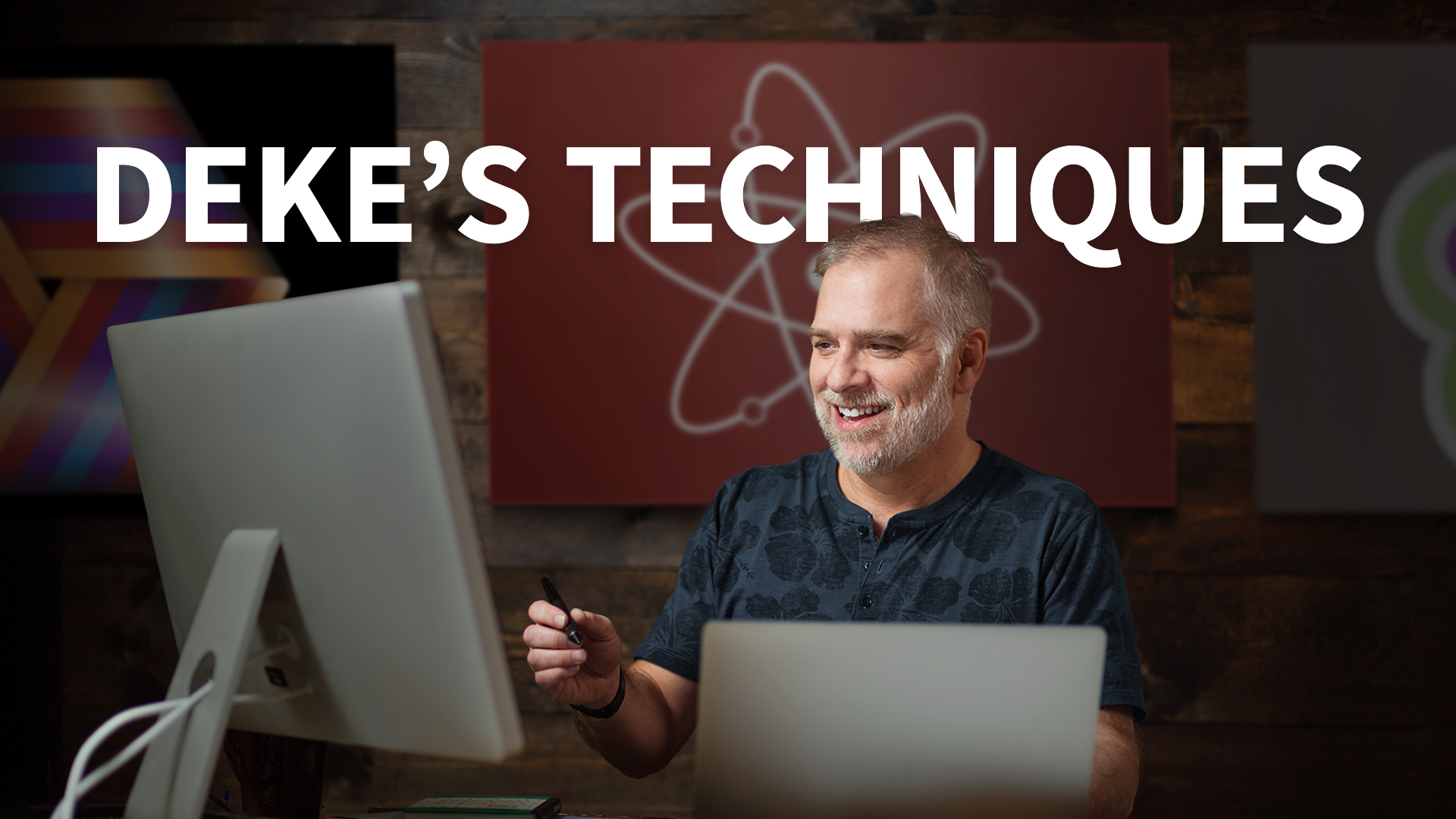 Join Deke McClelland for an in-depth discussion in this video 678 Reversing the direction of your illusion, part of Deke's Techniques.

- Hey, gang, this is Deke McClelland. Welcome to Deke's Techniques. Now last week, I showed you how to create an extreme cafe wall illusion that I'm calling, for lack of a better term, the magical checkers illusion, so-called because these little checker patterns make it appear as if these purple bars are moving back and forth in a kind of zigzag fashion even though they're absolutely horizontal and parallel to each other. Now by the time we're done, we're going to be adding all these devices in order to create this mind-bending op art, and we'll be doing that this week incidentally, but first I want to show you how to control the direction of the illusions.

Now, if we had to rely on Illustrator's Rotate tool, we are working inside Illustrator by the way, if we had to rely on the Rotate tool or the Transform panel, it would take us forever. We're not going to do that, we're going to make things simple by taking advantage of the old-school Transform Each command. Here, let me show you exactly how it works. All right so, at the risk of repeating myself, I want to make things crystal clear because this is a pretty extraordinary effect. So, notice in the current version of the document, the top purple bar appears to move down and to the left.

All right so, let me show you how it works. I'm going to switch to our document so far and turn off that direction layer, which is the one that contains all the arrows, and I'm going to click on one of these dot clusters and zoom on it. I want you to notice that what we have here is five circles, all of which are grouped together. Now, normally, when you've selected a group, you'll see the word Group over here in the far left side of the Control Panel, but in the most recent versions of Illustrator, you're going to see word Ellipse instead because Illustrator's basically peering through the group, but if I were to twirl open the dots layer, you can see that we have a ton of groups.

Each one of the clusters of five dots are grouped together, and that is very important for this effect to work. All right, so I'll press CTRL + zero, or CMD + zero on a Mac, to fit the artboard on screen. Then I'll go up to the Select menu and choose the All command, or you can press CTRL + a, or CMD + a on the Mac, to select everything on the dots layer. The reason I'm only selecting the contents of the dots layer is that the other layers are either locked or hidden. I'm going to zoom in just a little bit here.

Now I don't want to see all these anchor points because they're going to cloud my view, so I'll hide them by pressing CTRL + h. That's going to be CMD + h on the Mac. I want ya to notice the direction in which the bars are going. The top one is going down and to the left, the next one is going down and to the right, and so forth. But if I rotate the dots, everything's going to change. Now I don't want to rotate those dots using the Rotate tool because if I were to select that tool and then press the Enter key, or the Return key on the Mac, and dial in an angle value of 90 degrees, which is what we want, then I'm going to rotate all of the dots around a central origin point, which is this target right here in the center of the document.

That's not what I want, so I'll cancel out. Instead, I want to rotate each group around itself and to make that happen, I'll just go and switch back to the back arrow tool, so that we're not seeing that target in the middle of the artboard, and then I'll go up to the Object menu, choose Transform and choose this guy right here, Transform Each. Then inside this dialog box right here, you want to change the angle value to 90 degrees and turn on the Preview checkbox. So, this is the way things looked a moment ago before we rotated it, and I can see that by turning off the Preview checkbox.

As you might expect it works just as well with the checkers. I'll turn off the dots layer and turn on the checkers layer, and then I'll press CTRL + a, or CMD + a on the Mac, to select everything that's not either locked or hidden, and it you want to see the selection edges, you just press CTRL + h, or CMD + h on the Mac. Notice that the anchor points appear blue in keeping with the color assigned to the checkers layer. Now I also want ya to note, I'll go ahead and click off the checkers for a second, if I click on any one of them then we have a group. We're seeing the word Rectangle over here in the far left side of the Control Panel because these are smart shapes.

However, if I were to twirl open the checkers layer, you would see that we have a ton of groups. So, what we're going to do is rotate each one of the groups around its center, and I'll do that by once again pressing CTRL + a, or CMD + a on the Mac, to select everything. I'll press CTRL + h, or CMD + h on the Mac, to hide those anchor points, and then I'll return to the Object menu, choose Transform, and choose Transform Each. As you can see, if I turn off the Preview checkbox for a moment, we're starting with the top bar going down and to the left, the second bar down and to the right, but as soon as I turn on the Preview checkbox, the first bar is going down and to the right, the second down and to the left, and so on.

At which point, I'll click OK in order to apply that effect. Once again, this is the before version of the artwork, and this is the after version, and obviously you can see on screen that the only thing changing is the checkerboard patterns, and yet if you're like most folks, you're going to see those horizontal bars slanting in different directions. That's how ya reverse the direction of your advanced cafe wall illusion using the Transform Each command to rotate every single group around its unique center point here inside Illustrator.

All right, now if you're a member of Lynda.com/linkedinlearning, boy, do I have a treat for you. A total of three, count them, three follow-up movies, in which we create the final version of the artwork inside Illustrator, of course, so we're going to start off with the plain magical checkers illusion. Then we're going to add these stylized laptops, which angle differently from one row to the next, as you can see. Then we'll add these glowing and bending screens, which also alternate from row to row. Finally we'll connect all of our gadgets wirelessly using these tiny WiFi and Bluetooth icons.

By the way, this is the final version of the artwork, but then when you back off from it a little bit, the lines really start to move back and forth, even though each and every bar, as I've stressed many times, is absolutely horizontal. Now, in the end, we're just going to paste in, just copy and paste, the WiFi and Bluetooth symbols, which is why I figured next week I should show you how to drawn them, so we'll start off inside Illustrator drawing the Wifi symbol, and then we'll draw the official Bluetooth logo. By the way, if you have a moment, buzz by Deke.com, and check it out, free memberships for all, which allows you to comment, ask questions, post images, and so forth.

It's going to be a whole lot of fun. In the meantime, Deke's Techniques, each and every week. Keep watching.