337 Cleaning up a sketch captured with a phone 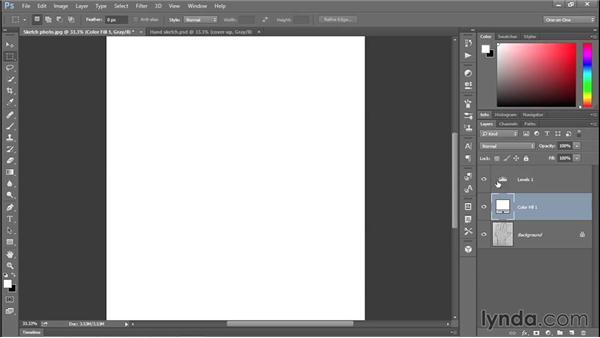 Join Deke McClelland for an in-depth discussion in this video 337 Cleaning up a sketch captured with a phone, part of Deke's Techniques.

In this movie, I'll show you how to clean up a bad photograph of a sketch so that you can take it into an illustrator as we did in a previous movie and trace it using the pen tool. And so basically, a smartphone is a great device for capturing something like this even though the image quality is just abysmal, as you're about to see. But, it does allow you to quickly and easily capture that sketch. And then we're going to take and then turn it into this here. Even though we still have the notebook lines running through the hand, I'm not concerned about that at all.

I just need to be able to see these very dark black edges against a very white background. And it's a little tough to pull off for reasons that are going to become apparent right away here. The first thing we want to do is increase the contrast of course. So I'll drop down to the black and white circle at the bottom of the Layers panel, and I'll choose Levels in order to bring up the Properties panel. I'm going to take this first black point value up to 100, which is going to darken up the pencil lines considerably. And then, I'll tab over to the white point value, the third value there, and I'll change it to 180 to make the whites a lot whiter.

And you can see that we have a big problem here. We've got a ton of blue noise coming up from the bottom left corner of this image. And if you switch to the channels panel, you can see why. Notice that the red channel here is tragic, right? I'll go ahead and scroll down a little bit. It's black down here in the lower left corner. So, we're losing all detail. The green channel, we are losing a lot of detail as well, but we get it back ironically in the blue channel. So, the blue channel turns out to be in the best shape of any of our channels here.

So what we are going to do is get rid of that levels adjustment layer, because we are just going to have to remake it. We don't have any choice. Because what we want to do is get rid of the red and green channels and keep just the blue channel. And so with just the blue channel selected here inside the channel's panel, you want to go up to the Image menu, choose Mode, and choose Grayscale. And because this is a mode shift, if there had been layers, they would have been fused together. In any event, go ahead and choose a command. Photoshop will ask you if you want to discard the other channels.

Of course, the answer is yes. And then you're just left with one channel gray, which is based on the blue channel. Now, switch back to the layers panel and do it again. Drop down to the black and white circle and choose the levels command. And let's go ahead and change that black point value once again to 100, and we'll change the white point value to 180, and we've got a much better result which is not to say best. It's still awful, but it's something that we can work with. So, next, what you want to do is drop back down to the background layer. And let's go ahead and create a layer of white that we're going to let the black seep through.

So, I'll go ahead and click on the black and white circle once again and I'll choose Solid Color. But, before I do, I'm going to press the D key to establish the default colors and then I'll press the X key. So my foreground color is white. Now, go ahead and choose that solid color command and you'll automatically get a layer of white like so. So, just go ahead and click OK here inside the Color Picker dialogue box. Now, to bring out the black details, you want to double click on an empty portion of this layer to bring up the ginormous layer style dialogue box. And then drop down to the underlying layer slider and drag the black triangle to a value of 90 like so.

And then press the alt key or the opt key on the Mac and drag the right half of the black triangle all the way over to the right side of the slider bars. So that the values read 90/255 and then the second value is 255. And then we end up with this result here. So I'll go and click OK, and then I'll turn a layer off, so you can see the difference. This is before we created that layer, and this is after. But we still have a bunch of garbage down left here. And we're going to fix that using a Gradient layer. So, again, make sure your foreground color is white, it's going to save you a lot of time.

And then, go ahead and click on the black and white circle and choose gradient this time around. And we're looking for a gradient that has a slight angle to it, 85 degrees. So it's coming ever so slightly up into the right. And now it's way too big, it's covering up too much area here. So I'm going to take the scale value down to 50 and press the tab key. And then you want to just go ahead and drag his layer down to right about here, so we're just covering up the bottom left most region of this image then click OK. And now, you want to double click on an empty portion of this layer to again bring up the Layer Style dialog box.

And this time, press the Alt key or the Option key on the Mac and drag the right half of this black slider triangle below the Underlying Layer slider all the way to 200. So the value after the slash should be 200 like so. So we're creating a long fading effect here. And then click OK. And now you can test out that layer if you want to, by turning it off. That's what the sketch looked like before. And this is what it looks like now. So, obviously, considerably better. All right. We've got this garbage up here at the top.

Notice that I have a hand that's clenching an arm. So I've got a little bit of arm detail right there. But I also had some other sketches on this piece of paper, including another piece of arm up here, and we want to get rid of it. So, let's go ahead and click on the levels, one layer there, to make it active. And then switch to the lasso tool, which you can get by pressing the L key. And when there's nothing selected inside of an image, you can press and hold the alt key, or the opt key on the Mac, and just click with this tool in order to take advantage of the polygonal lasso function.

And so just go ahead and surround this garbage right here, and then release the alt key, or the option key on the Mac. Lets create a new layer by pressing ctrl+shift+N or cmd+shift+N on the Mac. And we'll call this guy cover-up and then click okay. And now, just go ahead and fill this selection with white, which is your foreground color by pressing alt+backspace, or opt+delete on the Mac. And then you can press ctrl+D or cmd+D on the Mac in order to deselect the image. Now press, the F key a couple of times to fill the screen with the image. And so just to give you a sense of what we were able to do here, this is the before version of the scan, the original iPhone photograph.

And this is the cleaned up version that we can bring into Illustrator and trace to our heart's content.