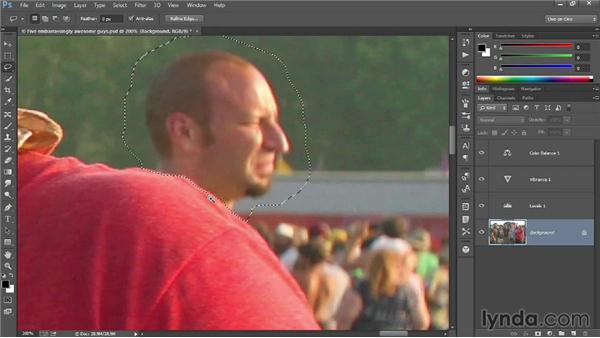 Join Deke McClelland for an in-depth discussion in this video 296 Deleting an inadvertent photo bomber, part of Deke's Techniques.

Hey gang, this is Deke McLellan, welcome to Deke's techniques. Now this week I'm going to show you how to get rid of an inadvertent photobomber, or it could be a verdant photobomber, somebody means to do it. In our case, we're going to start with this photograph of these five handsome guys here and there's a lot of stuff we could do to clean up this image. You can see this leg between me and James. And then there's this guy with his hat over here on Scott's shoulder. But it's this guy on Jacob's shoulder that has to go. Here, let me show you a magnified detail, and you can see that he's just making this sort of pinched expression.

It's like see, this is some kind of hateful growth coming out of Jacob, and Jacob's not that kind of guy. So, we've gotta get rid of him. And we're going to do so, not using any new fangled tools, but we're going to go old school. Because old school is the best school, where this particular image is concerned. Here, let me show you exactly how it works. All right, here's the original photo just so you'll appreciate how it's put together. I developed it from raw image but now it's just a flat background and then we've got a few adjustment layers working together just to sweeten our grimy appearance here at Bonnaroo.

And of course, there is also a sixth person in the group, this guy, this accursed fellow. We're going to start by trying out what you would think would work in terms of getting rid of him. Some of the newfangled tools that have appeared over time inside Photoshop. And then, when all else fails, we're going to take an old school approach that would've worked just as well back in Photoshop 3. So, I'm going to start by grabbing the Lasso tool, right here. And then, I'll just kind of vaguely select this guy's wretched head, by dragging around him like so. And then around Jacob's shoulder, as well.

And that's a little too much. I don't want that spike. So I'll Alt+Drag or Opt+Drag around that area to deselect it. First thing you'd want to do is switch to the background. So that we're not trying to edit an adjustment layer. And, wouldn't you think, what you do is go up to the Edit menu and choose the Fill command? And then you would set use to content aware, and then you would click OK and hope that Photoshop was wise enough to get rid of that detail inside the image, but that doesn't work. We end up with Jacob's shoulder sort of oozing out into I really don't know what that is.

Some conglomeration of people glued together there. So that's not going to work. Ctrl+Z, Cmd+Z on a Mac, to undo that change. Let's switch over to the good old Patch tool and see if that will do what we want. Because the Patch tool works with any selection, regardless of how you draw it, make sure that source is selected up here in the options bar. And drag this guy over to about here let's, say so we have some matching details, this should work nicely, release and we do get rid of that guy's face and this kind of vapor is staying that's exuding from Jacob's shoulder, but that's not what I would call a photo-realistic modification.

So, that's no good either. So, press Ctrl+Z, Cmd+Z on a Mac, to undo again. And this time, just because it's new, let's try this. The Content Aware Move tool. And let's go ahead and drag this guy over. And now what we've done, we've just put him in a different location. We've got this horrible content aware fill effect sort of gumming off of Jacob's shoulder along with this guy's head floating in very unfortunate space. I'll press Ctrl+Alt+C or Cmd+Opt+C in order to undo that movement.

And now let's roll up our sleeves and take the old school approach. Again, we need to switch to the background, that's very important. I need to deselect some of Jacob's shoulder right there. And I'm going to do that just using the Lasso tool, so no newfangled stuff. I'll just go ahead and grab the lasso and then I'll press the Alt key or the Opt key on the Mac and I'll just try to carefully drag along Jacob's shoulder. You want to draw on the inside edge of it if at all possible. So you select a little too much shoulder.

So notice, I'm selecting into his red shirt. And not enough though. I've got some of that guy's hideous neck right there, so let's go ahead and shift drag around it, in order to add it to the selection. Now we are ready to try out this technique. The first thing we want to do, after we've got the selection refined, is go up to the Select menu, choose Modify and choose Smooth. I'm keeping it old school, so I'm not going to use refine edge. I'll go ahead and choose Smooth and a sample radius of three pixels should work very nicely. Click OK, and now go to the Select menu.

Choose Modify and choose Feather. And I'll set the feather radius to three pixels as well. That should work very nicely, I'm hoping. Now, armed with the Lasso tool, I'm going to go ahead and drag this selection over to the right until I'm free of the guy's head, until it's completely removed. And you may recall, those of you who work in Photoshop, that you can remove selections independently of pixels by dragging them around using a Selection tool. The only key I press was a Shift key, just to constrain the angle of my drag to exactly horizontal.

Alright, now right click inside this selection and I'll choose good old Layer via Copy or you could just press Ctrl+J or Cmd+J on the Mac in order to float the selection to a new layer, and now I'll go ahead and double-click on the layer name. And I'll call it Blessed Covering, let's say. And then press the Enter key, or the Return key on a Mac, in order to accept that change. And now, let's switch over to the Move tool and I'm going to drag this selection, while pressing the Shift key, over to the left, like so.

And I might drag into Jacob's shoulder just a little bit. And, let's see what kind of match we have. I'll turn off the layer for a second. And, there's the guy. And I'll turn it back on, and we've got a little bit of weirdness, right there. Why don't we remove it in an old-school way using the Eraser tool? So I'll go ahead and select the Eraser. You can get to it by pressing the E key as well. I'll right-click inside the image window and reduce the hardness value to zero, and I might take the size value up to 20 pixels, let's say.

And press the Enter key in order to hide that panel and paint away that little detail right there that I don't want. And that looks pretty good because after all, we do have this weird action around these pylons or whatever they are, so this should you know, go more or less unnoticed. And now I'm going to right-click inside the image window and crank the hardness value back up to a 100% And let's see if we can erase back in very carefully, some of Jacob's shirt right there, without revealing the guy, right? The last thing you want to do is that, because that's part of the guy, and we don't want him.

So, I'll press Ctrl+Z or Cmd+Z on a Mac in order to undo that and now I think I can erase a little farther up. So I just want things to look all natural and junk. And to me that looks great, I mean we have a kind of interesting repetition of pylons right? This guy's right over there. And this guy's right over there and so forth. But who is going to notice that? When Jacob's smiling face is so close to that detail, they're just going to be looking at him. All right, so I'll press the F key a couple of times in order to fill the screen with this wonderful group photo.

And that is how you get a highly undesirable image element using an extremely old school Photoshop 3.0 approach. Here, inside Photoshop. Ding dong, the growth is dead. Now, you're probably thinking, gee whiz, Deke. I can't get enough of these things. What's in store for next week? Well, next week, very exciting project, we're going to create this giant panorama here, and I printed it at 400 pixels per inch, so it could be even larger. That is stitched together from a total of 19 different photographs.

Deke's techniques, each and every week. Keep watching.