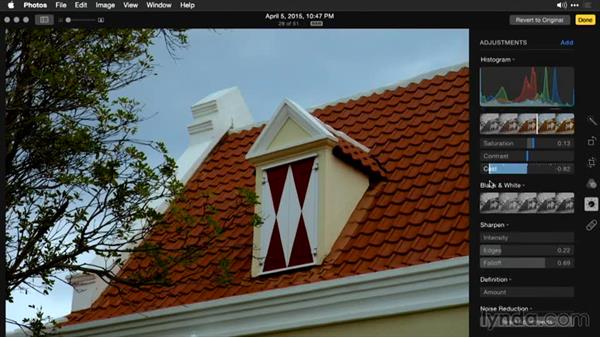 - All right, how'd you do? Hopefully the image looks a bit better and maybe a little bit closer to this. Now yours doesn't have to look exactly like this. Remember, photo correcting is very subjective. What I want you to do though is to tweak the image until you feel that it looks about right. Let me show you the adjustments that I made and explain my logic. For this particular image, one of the things I did was right away get the exposure right. Now I took the lazy route and clicked the Enhance button to make an initial guess, and that helped.

Using the adjustments here, I decided to really bring up the overall light in the scene. But the Black Point needed some additional pop there so that the shadows were nice and rich. Once I got the light correct, I decided that it was essential to get the image color cast removed. So using the eyedropper, I clicked on the white area to try to clean it up. Neutral Gray helped, but let's try the tint method, and we'll see that it's just a little bit more aggressive.

Using the Color controls, I further refine this with Cast. And you see that I can cool that down 'til the whites really start to become clean. Then I brought up the Contrast so we had good separation in the color and began to refine the color. That helped a lot. Now that that felt pretty good, let's just continue to recover the shadows a little bit and bring the highlights down a little bit, and you notice that does a nice job on the sky and really balancing it out.

Now this is a multifaceted adjustment. If you press the "m" key for the before and after, you can see that the image has had a lot of the contrast brought back and that the colors are richer. This is a tough one though, so I could see that you can easily make some tweaks using the Cast controls depending upon how strong you wanted to warm or cool that shot. That feels pretty good to me, and I think just a little bit of definition rounds it out nicely. If you look at the before and after, we have a much stronger presence of color in the image and much better contrast between the lights and the darks, both in terms of color and overall exposure.

This is one of those instances where taking the time to adjust things in multiple sections really got the job done.

7/22/2015
Learn how to quickly enhance and repair your images with Photos, the image editing software built into OS X Yosemite. In this course, author Rich Harrington explores nondestructive workflows that improve an image but maintain flexibility for future editing. He uses real-world examples—raw and JPEG files shot with DSLR cameras and iPhones—so you can get a realistic picture of how far you can take your own images. Whether you're brand new to Photos or transitioning from iPhoto or Aperture, this course will help you get the best-looking results with its features.
Topics include: