Revisiting the definition command for contour and shape 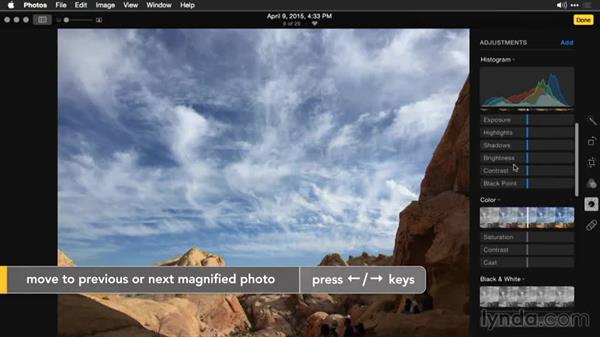 - Definition is going to better increase the separation between light and dark elements and it's a fine adjustment to add. Let's put it into the image we were just working with and then tackle one more. With this particular image, watch what adding Definition does. Pay particular attention to the shadows. As we drag, notice how the shadows get more intense. Now, as you add Definition, you might find that you need to back off the intensity of sharpening a bit. Sometimes the two can overdo it when combined.

In fact, let's just back those both off a little. Here is the before. There's the Definition. And there's the sharpening. And I'll split that up a little bit and it looks pretty solid. Notice there how sharpening really brings out the details in the rock and helps the leaves stands out by detecting the highlights but we haven't taken it too far. Definition on the other hand, put some nice selective contrast into the rocks there and I really like what it did down here in the shadowy areas of the vegetation.

If we toggle that on and off, I think the shadows are much stronger. Let's pop that out and press the M key for the before and after. Well, that's a much stronger image and I like how the Definition and the sharpening has brought out the rock and the boost in color has made the sky more attractive. Let's press the arrow key twice and go over two images. In this case, we'll do an auto adjustment for Light and Color and then drag the Color over a little bit more.

Let's pop in to 100% and take a close look at the rocks here. By using Definition, notice how the details in the rocks become much higher contrast. I really like how this brings up the shadows. Put a little bit of Intensity in there and in this case, bring the Edges up a little heavier. Before and after.

Before and after. Let's play with the Edges and the Falloff. We'll take that down a little bit. That's pretty good. Before. After. Now, let's explore our people here. They're in the shadows but I definitely need to do a little Noise Reduction here on the lower end of the image. A lot of noise in the shadowy regions. Not too bad. Let's zoom out and press the M key. The original image and the new image.

Notice how Definition has done a great job of really making these rocks pop. If I toggle that on and off, notice that the clouds are much more interesting this way and that the shadows in the rocks, particularly this pillar and cache shadows over here are so much more visually dynamic. The use of Definition is a great way to make your shadows and your highlights more interesting to the viewer.

7/22/2015
Learn how to quickly enhance and repair your images with Photos, the image editing software built into OS X Yosemite. In this course, author Rich Harrington explores nondestructive workflows that improve an image but maintain flexibility for future editing. He uses real-world examples—raw and JPEG files shot with DSLR cameras and iPhones—so you can get a realistic picture of how far you can take your own images. Whether you're brand new to Photos or transitioning from iPhoto or Aperture, this course will help you get the best-looking results with its features.
Topics include:

Video: Revisiting the definition command for contour and shape