Migrating from iPhoto or Aperture to Photos 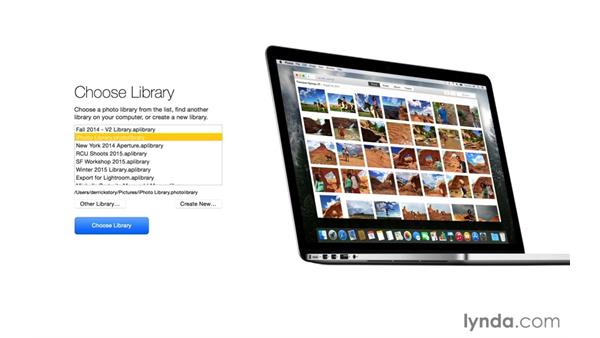 Join Derrick Story for an in-depth discussion in this video Migrating from iPhoto or Aperture to Photos, part of Learning Photos for OS X.

- Does this look familiar to you? We're in iPhoto here. And this movie is for folks who are considering moving from iPhoto or Aperture to Photos for OS X, you can do that. And if you do that I want you to know that your iPhoto library and your Aperture library and the apps iPhoto, Aperture, and Photos for OS X will still remain on your hard drive. They don't go away. So you can migrate over to Photos for OS X and still have your stuff.

Now once you migrate you must know that any changes you make to that library that you've migrated, let's say from iPhoto to Photos for OS X, those changes aren't communicated back. So you make changes in Photos for OS X, they stay there. You make changes in iPhoto, they stay there. So there's no cross-talking here. But you can migrate. And I'm actually gonna walk you through that process in just a minute. Things like star ratings that we up here, those go over to Photos for OS X, but not as star ratings, they go over as keywords.

So star ratings, color labels, flags, they're retained, but they're translated to keywords in Photos for OS X because at this point right now Photos for OS X doesn't have star ratings. So they make it a keyword, you create a smart album based on that keyword, and then you can gather those images back together. Projects are turned into Albums, and they're found in a folder labeled iPhoto Events. I'll show you kind of how that works.

Let's hop over to Photos for a second. See down here, I have iPhoto Events right here. This came over from iPhoto. I just brought it over, and I actually created a library, and I imported it, and there you have it. So that's the way that will look. And you could have a bunch of little squares here. So if you bring a whole bunch of stuff over there'll be a bunch of squares here. And you can continue to use Aperture and iPhoto to your heart's content.

The first thing that you'll most likely see when you launch Photos for OS X the first time is the Welcome screen here. The next thing that Photos will ask you to do is Choose a Library. And you can see I have a whole bunch of libraries here on my hard drive. I could pick any of those to be the default Photos Library. Actually that's not what I wanna do. Now I can migrate these libraries to Photos later, because Photos can handle multiple libraries, but right now I'm thinking of my core library, my system library, the one that will connect with iCloud.

And in that case I think the best way to go is to start a new library just for Photos for OS X. Let that be my system library. I'm already using iCloud. I already have a bunch of pictures in iCloud from my iPhone, and from my tablet, my iPad, and all that. So why not just start clean with all of that and then I can add more images to this library. And so that's what I chose to do. Now you may choose differently. Of course my only tip is if you do migrate an album, an existing album, test one first.

Don't do the one that has 400,000 images in it, just in case something goes wonkers on you. So either Choose a Library, or create a new one. I recommend that you create a new one. Now once you do that Photos will ask you do you want to use iCloud Photo Library? And I recommend that you do. I mean, one of the big advantages to Photos for OS X is having this connectivity with your other devices, and your other computers. So I click the big blue button here, and say yes, I want that.

Once I do that then Photos for OS X will start communicating with my iCloud Library. Of course, you have to have internet connection to make this work, and it will start bringing stuff over. And you can see here, this is like the early stages. I have a bunch of albums that it's bringing in that I've already created through using iPhoto for iOS, remember that? Eye-Fi cards, albums that I've created, I have OLYMPUS stuff here, I have all sorts of stuff, Snapseed, all that will come in because it lives in my iCloud Photo Library.

And now this app, Photos for OS X, will be communicating with that. And of course, as I make changes in this library here, in this environment, it will be reflected on my other devices, and vice versa. So that kind of will get you started. Now what I recommend that you do with your other stuff, your existing Aperture and iPhoto libraries, I would leave them alone. Knowing that you can open them in Photos if you want, but also knowing that at least for the time being, as long as you're in Mac OS X Yosemite, we know for sure that you can continue to use iPhoto and Aperture.

Why not just leave those libraries in there and continue working with them in those environments as you learn the Photos for OS X, and also see what happens with of this. We're at V one here, it's brand new. Who knows what next year will show us.

5/27/2015
New to Mac OS X Yosemite, Photos represents the future of photo storing, editing, and sharing software from Apple. In this course, photographer, author, and educator Derrick Story introduces the features and capabilities of Photos.

The course begins with an overview of what Photos is and does, and then provides advice for converting iPhoto and Aperture libraries and adding images to the Photos library directly from a camera. Derrick then details the powerful image editing and sharing options, and shows how to build photo-based projects such as slideshows, greeting cards, books, calendars, and prints directly from Photos.
Topics include:

Video: Migrating from iPhoto or Aperture to Photos