Converting your iPhoto or Aperture library into Photos 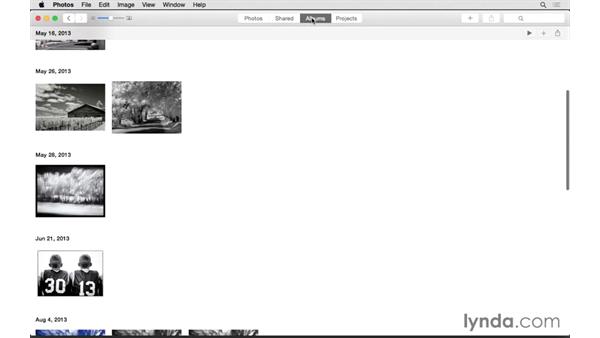 Join Derrick Story for an in-depth discussion in this video Converting your iPhoto or Aperture library into Photos, part of Learning Photos for OS X.

- This movie is for those of you who have used iPhoto or Aperture in the past and maybe want to convert a library or two to Photos for OS X. If this doesn't apply to you, guess what? You get to move on to the next movie and play with something else. For those of you that have been Aperture and iPhoto users, though, let's talk about converting a library to a Photos for OS X library. Now I have one such library right here. Because of the unified library system libraries for both Aperture and iPhoto are essentially the same so it doesn't make any difference which app this library originated in, between those two.

So I have this library here. If I were to double click on it, it would open in Aperture. Well, we don't want that. We want this library to open in Photos for OS X. There's a couple ways to convert it. I'll show you one. I'm just gonna hold down the control key, click on this, and the Open With command will work. It'll convert the library and open it for Photos for OS X. That's not the way we're gonna do right now because I wanna walk you through the other way because it's more versatile and has other benefits.

So we won't do that. We're just gonna go over to our Photos.app. I'm gonna hold down the option key and I'm gonna double click on it. This is what I wanted to show you. This Choose Library menu that you get by holding down the option key and launching the Photos for OS X app. So, anything that can be opened by Photos will show up here in this dialog box and if you have external drives connected with libraries on it they'll show up here also.

Now, what we wanna convert is this iPhoto Aperture to Photos library and I think I have that right here. So I'm gonna choose that library and Photos for OS X will prepare it for me. You can even take a quick tour of Photos while you wait. We have a small library, which, by the way, I recommend. Not starting out with your many gabillion gigabyte iPhoto or Aperture library. Try something smaller first.

See how it goes and then decide what you want to do. So here we are. It's been converted, right here. Let's go to Albums. And we'll just open this up right here. And we can take a look at these photos. So they look great in Photos. I'll just use the arrow key, kinda take a look at some of these shots, and I go yeah, yeah, this is great. But you'll notice that these shots are on their own.

In other words, where are the rest of my photos, earlier in my Photos app? They're in your system library, that's where they are. This is a different library. That's why I wanted to show you that approach. You could switch back and forth by launching Photos holding down the option key and you can go to the migrated libraries that you've created. But they're not all merged into one library. Let me show you. Let me go ahead and minimize this. Let's come back to here.

So, what it did was, it created a new library. So this is the one that we can switch to now, in Photos for OS X, and then here's our original. Now, watch what happens when I try to launch the original. I'm gonna double click on it. We get a message. And it tells me that the content of this library has already been migrated. So there's a little flag that gets put in there. Now it can be opened in Aperture, but any changes that happen after I open in Aperture won't be reflected in the new Photos library.

So that's kind of a nice little warning there. So I'll go ahead and open it in Aperture. The reason why I"m opening in Aperture I want you to see that you don't lose your stuff. That it isn't corrupted or broken or anything like that. You still have the original library but it does have the migrated flag. Now we have the Photos for OS X version that we were looking at earlier. Now, what if I wanna go back to my system library? Well, I'm gonna quit Photos, then we'll hold down the option key when I launch it again.

Now we get my choice of what library we wanna use, so we'll go back to the system photo library, choose that. We'll go back to Photos, and now we're feeling comfy again. Only one library can be your system photo library, and that means only one library can connect with iCloud and have all that sharing functionality but you can convert your other libraries and at least look at them and use them in Photos if you want by using the technique that I just showed you.

5/27/2015
New to Mac OS X Yosemite, Photos represents the future of photo storing, editing, and sharing software from Apple. In this course, photographer, author, and educator Derrick Story introduces the features and capabilities of Photos.

The course begins with an overview of what Photos is and does, and then provides advice for converting iPhoto and Aperture libraries and adding images to the Photos library directly from a camera. Derrick then details the powerful image editing and sharing options, and shows how to build photo-based projects such as slideshows, greeting cards, books, calendars, and prints directly from Photos.
Topics include:

Video: Converting your iPhoto or Aperture library into Photos