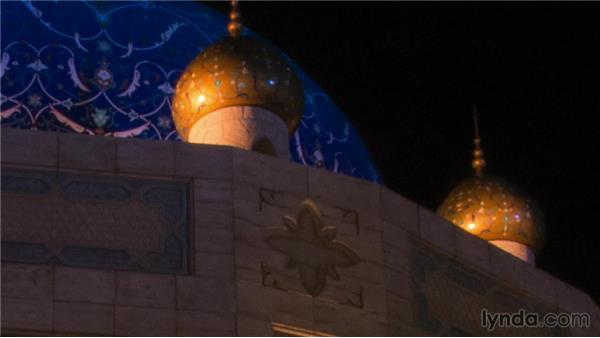 Now I think I gave you two pretty good reasons there to run this on a processed image, if you're just looking a little bit of an extra push. And in fact Photomatix does make a plugin if you just want to invoke that from right inside of PhotoShop. But let's take a look at a couple of raw files and I'm going to explain why I don't have graphics. In this particular image, my subject was moving around too much. This iguana just did not want to sit still and it was impossible to get a good series of brackets that didn't have his body twisting too much.

And then on this next shot, it's a long exposure. Now I shot for several seconds to get this streaking effect of the turning carousel. And it just did not work as an HDR but I'd like to take advantage of toning on those raw files. Let's start with the first one here. And I'm going to open that up. Notice, because it's a raw file I can take advantage of things like Noise Reduction. In this case, I'm going to uncheck Exposure Fusion, we'll take a look at that one in just a moment. And, I'll click Okay. The raw file is converted, noise is reduced, and the image is opened up into Photomatix Pro.

Let's go back to a nice color one here. I think I'm actually going to work with some of the Details Enhancer, and you see that that's just making those colors lush and vibrant. Really brings things out. I want to zoom in a bit. And on our subject here, let's play with the lighting a bit more. I like that. And I want to bring out the contrast to really get some good detail in there.

That looks great. Bring a little bit of saturation into the shadowy region. And look at the before and the after. Alright, we'll press return to apply that. And the image is tone mapped. Now I'm going to crop this image much tighter later on in PhotoShop. I really only want to see about this portion of the image right here but the subject was too far away. I didn't have chance to shoot with a longer lens but I like this much better now. Let's save that, and let's do a quick crop.

We'll pull that in. Place our subject. Let's delete the crop pixels to save some space, and we'll run the Camera Raw filter. Put a little more Clarity in. Play with the balance of Vibrance there. Leaving the greens intense, but popping down those reds just a bit. And add a bit of stylized vignette just to guide the viewers eye. Alright. Before, after on the finesse to the color. And with that tag team between Photoshop and Photomatics, we are good.

Let's save that and go on to our last image. I'm going to bring this long exposure in. This one was shot at F 22 at 5 seconds, I really wanted the lights to bloom so I stopped down really small. And I'll open that up and in this case I am going to chose the ability to Enable Exposure Fusion. It's essentially going to take the raw file and convert it a couple of different ways. By developing the file a few different ways and then merging those results.

Because this is a nighttime shot, I am going to reduce the noise a bit. Note here if we look at this, this was shot at ISO 800. So, the chances of there being some noise in that image is relatively high. It looks fairly clean, but you can see here that there is some noise in that. Not terrible, that's of course at 400%, so it looks a little grainy, but I think that's good. Let's bump that up just a bit, and click Okay. When you do this, this method can definitely lead to some noise.

You're going to want to play, with the different options here. Perhaps just using Exposure Fusion so you don't get too much noise added in to those details. That's looking pretty good. Let's back the Strength off just a bit. And I'm actually take the Brightness down. And a little less Contrast. Alright I like that. Balance out the Saturation. And the Midtone. That looks pretty good. I'll click Apply and the image is fused. Now that noise is going to be reduced a bit more in that process.

The preview does exemplify it just a little bit. That's looking pretty good, I find that putting just a little bit of Contrast in there is going to help clean up that noise even more. Let's take those blues and make them nice and rich. And I'll play with the yellows there. That looks great, little bit of sharpening. Well, doesn't look like it's needed, so I'll skip it. Click Done and let's save that image. There we go. It is fused and I could go ahead and write the file. Now in this case, I am sending it back into Photoshop, and that's perfectly acceptable.

Remember, when it's there, you can take advantage of anything else, but I don't see too much noise there. That's looking pretty good to me. Just a little bit there on some of the surfaces. So, lets take advantage of the Camera Raw Filter inside of Photoshop CC. We'll zoom in to the noisiest areas. View that at 100% so that we can accurately judge it. And I'll take advantage of Noise Reduction, particularly for Color noise. That looks great. Let's put a little bit of Sharpening back in.

Before. After. You see that that got the splotchiness taken care of. That is a rough brick texture so it should still look texturized. I just don't want to see some of that color fringing. Alright, that looks good. Let's finish it out. I'm going to pull down the Highlights just a bit and balance out the Shadows. I like them being rich and dark. Some additional Clarity. Let's take advantage of Upright. And I can straighten that image or provide a balance perspective fix.

Without. With. That definitely compensated for shooting from the ground. I like that. Let's click OK. The image is fixed and I'm going to apply a square crop to this particular photo, which suits this subject well. Let's nudge that into place. There we go. That looks nice and balanced. And the image is done. Let's just hide the Timeline there. Take that full screen. And I'm very satisfied with that image. I was able to push that substantially beyond the original raw file to really bring out some of the details.

I'm finding more and more by combining multiple types of techniques, in this case long exposure and HDR post processing workflows, I could really get some interesting results.