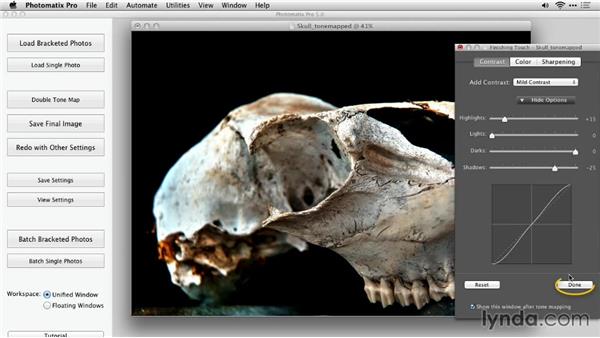 Most people, when working with HDR images, choose to shoot bracketed photos where you have multiple exposures to combine. But there are times when you can use Photomatix to work with single exposures. Let's take a look at a handful of images. Some of them are flattened files already processed to a JPEG or a TIFF, and the others are actually raw files that will give us a bit more latitude. Let's start with those files that are already processed. I'll right click and choose to open those in the Photomatix. We'll open those as files only. And you see that they both open.

Let's close this one out. I'll put those side by side. With it open I could choose to actually process the image just under Edit, Tone Map. Now this particular image does not seem to have any noise problems so I'll choose No. It brings it in. And you can see that it's bringing out the detail, really nicely, in that bone texture of the skull. I like the intensification of the color. And those teeth look just fantastic with how they're bringing out the detail.

So that's just the default view there. With a quick apply, you'll see that its done, and we can even put a little bit of additional contrast in, and that looks great. I'll choose Done and there's the tone mapped image. Lets save that. File, Save As. And if you put those two images side-by-side, it's clear that that's a nice improvement to the single image. Let's see that again on a flattened file.

Edit, Tone Map. No noise reduction here. And in this case, I'm just going to go to a nice black and white image. I really like that look there. Nice drama, comes through really well. And I'm just going to put a little bit of color back in by bringing up the color saturation. I want it mostly black and white. That looks great. And if we toggle that off and on, you could see that, that just did a great job of making a compelling black and white image. I particularly like how it brought back some of the missing detail along the left edge.

Let's apply that. A little bit of contrast. And I'll save that so you could see the before and after.