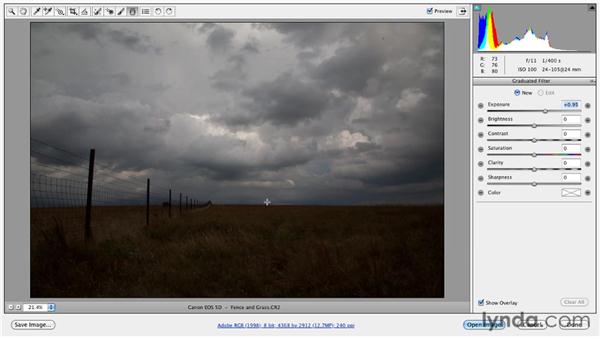 When we talk about expanding dynamic range, it's usually the multi-shot tone mapping special software HDR process that gets all the attention, but very often all you need to do to solve the dynamic range problem is a little selective tonal adjustment, which you can achieve through some simple masking. As we discussed earlier, in most cases your camera will expose to protect highlights and that will tend to underexpose darker areas in your scene. However, very often you'll be able to brighten up those darker areas to even out your exposure.

We're going to do that right now with a raw file that I shot on a cloudy day. Now, I first took a picture of this scene exposed normally and I got this. Now, there are some bright spots in the clouds up here but because this is a RAW file I could probably recover those. However, it was a very dramatic sk, and I knew that I'd really want to play up the contrast in the clouds and that I would have an easier time of that with a darker exposure. So I dialed in some negative exposure compensation, shot again, and got this.

This is the image we're going to work with and right off the bat you might look at it and say, well, that's too dark. And it is too dark, except look. The sky already is a lot more dramatic than what we were seeing before. So this is working to get us a sky that's a little bit crunchier and got some more drama in it, but we're way outside the dynamic range of the camera here because this ended up too dark, so we're going to have to brighten that up. Now, this is a RAW file, so when I open it up in Photoshop, the first thing that happens is it gives me the Camera RAW dialog box, which you should be familiar with by now. So what I need to do is figure out how to brighten just the foreground and I can do that in Camera RAW with a gradient mask.

Now, this gradient mask may not be the only edit that I need, but it's a good starting place. So if I click up here on the Graduated Filter, and when I do that I get a set of exposure controls over here. I'm not going to worry too much about-- actually I'm not going to worry at all about getting these set properly, because I can't really tell what they're supposed to be until I've got the mask on. So I want to click where I want this adjustment to be strongest in the image, and so I'm brightening. So I'm going to click down here in the grass and I'm going to drag up here and as I do, our brightening gets ramped off.

Now, I don't know that this is the right amount of brightening. I can't tell that for sure until I get the mask in place, so I'm going to put this here. And that's kind of not doing too much, so I'm going to brighten it up some more and there we go. now we're getting somewhere. I am going to dial in some contrast too, and I might as well dial in a little Clarity, just make some of that crunchy grass texture appear more. Now, why is this edit working? Because it really is. I've got a very natural looking image here. I have a bright foreground and I've still got my nice dark sky.

Depth queuing is one of the ways that we see depth in the real world. Very often we expect things to get darker towards the horizon, so the fact that we are brightening up this part of the image and slowly ramping off that brightening until there's not very much up here, this is the original tone of the image, that actually looks very often like something we expect to see. This is not an unreasonable type of lighting to see in a scene like this and our eyes recognize that. So this is a case where just with a single gradient mask, I can make a big change to this image. Now, again, this may not be the only edit that I want to make. If I go back here to my global adjustments, I can see that I probably want to maybe brighten up the whole image a little more and maybe dial in some contrast to the whole image a little more.

I'm watching these areas very carefully on my screen. They're not overexposing and I'm not seeing any clipping over here, so that can work a little bit better. After I print it I may decide that I need even more adjustment, but this is a very simple way of effectively doing the same type of thing that we do in HDR. We have chosen one exposure for one part of the image and another exposure for another part of the image, and in a lot of cases this will be the only type of adjustment that you'll need to get more apparent dynamic range into your image.

7/22/2011
In this course, photographer Ben Long describes the concepts and techniques behind high dynamic range (HDR) photography, a technique used to create images that have a wider range between the lightest and darkest areas of a scene than a digital camera can typically capture. The course begins with some background on dynamic range, on how camera sensors detect shadows, and on the kinds of subjects that benefit from HDR. Ben then describes and demonstrates several methods of generating HDR images, starting with single-shot HDR, which relies on masking to subtly enhance the dynamic range of a shot. Next, the course covers multi-exposure HDR, which involves shooting several photos of a scene, each at a different exposure, and then combining them using software tools. Ben demonstrates how to use Photoshop and the popular Photomatix software to process HDR images whose appearance ranges from subtle to surreal.
Topics include: