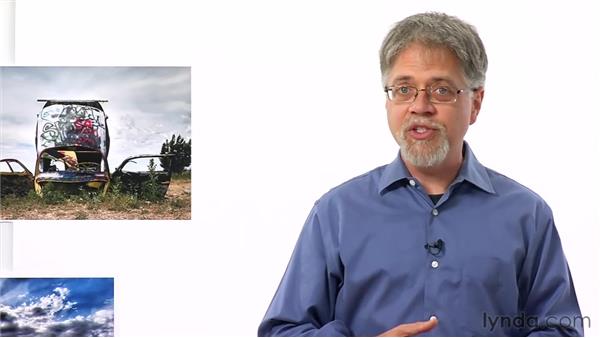 Whether you create a digital image by scanning from a piece of film, taking a picture with a digital camera, painting in a painting program, or capturing an image with a digital video camera, however you do it, you are creating a grid of pixels and each pixel has an individual color. Every color is represented by a number. So all red pixels might be represented by the 4, while all purple pixels might be represented by the 5. The total number of colors that you can represent depends on the range of numbers that you have to work with.

A single 0 or 1 is referred to as a bit and we group bits together into bytes to create larger numbers. Now we usually count using a base 10 system, most likely because we have 10 fingers. If I limit myself to only two digits when counting in base 10, and I don't mean digit as in a finger, but digit as in the 1s or 10s digit in number, with two digits I can count from 0 to 99. If I give myself a third digit, I can count from 0 to 999.

A fourth gets me to 9999 and so on. Computers count in binary or Base 2 system and it works the same way. If you add another digit you can count higher. In Base 2 with 8 digits or bits, I can count from 0 to 255. With 9 bits I can count from 0 to 512 and so on. Therefore, if I say that I'm going to store 8 bits of data for every pixel in an image, then I'm storing a number between 0 and 255 and that number represents the color of 1 pixel in the grid of pixels that makes up my image.

In other words, I can have 255 different colors in my image, 256 if you count black, which is 0. We say that such an image has a bit depth of 8-bits. Now, this is not a measure of dynamic range. The darkest and lightest colors can be anything I want them to be, but with 8 its per pixel I get only 256 slots between the darkest and lightest. If I go to a higher bit depth, say 10 or 12 bits per pixel, I get a tremendously greater range of numbers to work with and therefore a much greater number of colors.

Now, your camera probably captures 10 to 14 bits of color per pixel. The JPEG format only allows 8 bits of color per pixel. So if you are shooting in JPEG mode, then the camera throws out a fair amount of color data before it saves the file. I am talking about all this now because later some of our HDR processes are going to involve creating images with a very high bit depth, 32 bits per pixel, which allows us to store lots and lots of colors and tones, and then we are going to crunch those big numbers down to 16 or 8 bit numbers and that crunching down step, that change a bit depth, is a critical part of certain HDR methods.

7/22/2011
In this course, photographer Ben Long describes the concepts and techniques behind high dynamic range (HDR) photography, a technique used to create images that have a wider range between the lightest and darkest areas of a scene than a digital camera can typically capture. The course begins with some background on dynamic range, on how camera sensors detect shadows, and on the kinds of subjects that benefit from HDR. Ben then describes and demonstrates several methods of generating HDR images, starting with single-shot HDR, which relies on masking to subtly enhance the dynamic range of a shot. Next, the course covers multi-exposure HDR, which involves shooting several photos of a scene, each at a different exposure, and then combining them using software tools. Ben demonstrates how to use Photoshop and the popular Photomatix software to process HDR images whose appearance ranges from subtle to surreal.
Topics include: