Replacing a selection with a source 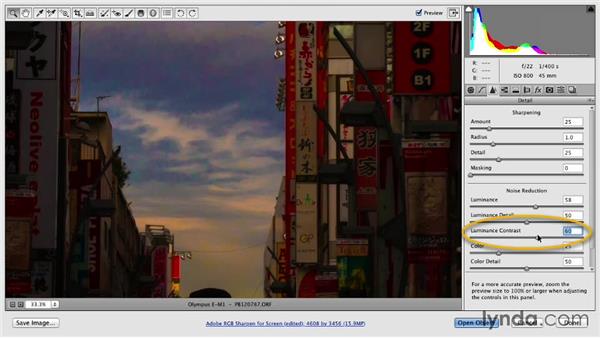 We took care of some ghosting, but there's still some problem areas that I'd like to replace. Well, fortunately, I have some additional controls that are useful. Working with the image here, I think some details enhancer would be nice. I like that a bit vibrant. In fact, I think that looks pretty good there with Contrast Optimizer. But what I don't like is the sky. Now, I could of course tweak this a bit by playing with the saturation, but everything else is getting over the top, and the sky just doesn't look that good. I don't like how it merged together.

It was a very grey day. Well, fortunately, I have Selection mode here. And what I can do is start to drag through and make a basic selection. Note, in fact, you have a regular lasso, a magnetic lasso and a polygonal. I'll use polygonal here to make a nice rough selection. And as I go through and click, it starts to build out a selection. Now, the good news is, is you do not need to be incredibly accurate, because Photomatix has some tools to streamline this.

Let's go down here, into this little divot of the sky, and I'm just making my way up the top. There we go. Let's switch this to single column so there's a little more room for the user interface. All right, that worked pretty well. And what I can do here is attach this to the edges. And note that it tries to redraw. I'm going to pull the contrast in, and I can adjust the sensitivity. That looked better there, using a lower value. And it kind of rounded out and picked up some of the edges for me. Now that I've done that, I can right-click and choose to replace with one of the original photos.

And note there how you could bring back the details from just one photo. Now, if you go too far, it's going to tend to get a little bit blurry, but that helped there. I pulled that back in, and that brought in some of the details. Let's bring down the lighting effects a little. And play with the overall compression. Looks good. Balance out the mid tone. And click Apply. Let's bring out the blues a little bit more.

And the aquas. Alright, it feels pretty good. And I'll click Done. But what I'd like to do is one additional step of post-processing. So let's save this, and we'll open that up in Photoshop, and then I'm going to come back over here and grab this original raw file that had an okay sky. We'll open that up and let's develop it specifically for the sky. I'm going to pull that exposure down a bit. Pop the vibrance so it's over the top with a rich saturation.

Notice there, that's getting awfully noisy, so let's pull down some noise reduction and color reduction. There we go. I just want to get a nice silky sky. There we go. That's helping. Take the vibrance down a little bit. Looking pretty good. And let's just push the individual colors here. I'll bring out some blue using the split toning feature and let's set this to a darker blue and push the shadows. And that sky looks much better. Of course, the rest of the photo looks like garbage. But that's okay. Let's open that up and bring it in. I'll simply select that and copy it to my clipboard and switch over and paste. Now, by choosing both layers and the Move tool, I can invoke the Auto Align option here.

And it's going to analyze the two layers and properly overlap them. There we go. Let's turn that off for a second, grab the bottom layer, and use the Quick Selection tool, and drag through. There we go. Pick up some of this lower area here. Opt or Alt key to subtract if you get stuff you don't want. There we go. We'll click Refine Edge and turn on the smart radius and note it analyzes those edges pretty well. And let's just smooth and feather that a bit so it's nice and gentle. Alright that looks good, I'll expand that edge out a bit.

Hit OK, and now with an active selection, turn on the top layer and simply add the layer mask. Now I've got my dramatic sky layered back in, note here I have a small problem zone. This is that person walking through there. So I'm going to need to do some cloning, but that's okay. With the layer selected I could just simply click here and we're going to paint out that guy as he was walking through and in fact all of that stuff that used to be there was a bit distracting in the street anyways, so we'll just take that out.

Giving it a nice, clear sky all the way down. Now, I can go in and do a little bit more Photoshop work here, which I'd need to do to make this completely believable, but notice there that was pretty simple. In fact, I can also just change the blending mode to something like Color or Hue and now it becomes pretty believable. Or something like soft light. In fact, I kind of like that and I'm just going to double it a couple of times. And now I don't even have to worry about masking or making it believable.

I simply lifted the color from one layer and used it to match that area in. And so now I've got my great dramatic sky with the rest of my scene, essentially using both HDR and compositing techniques to pull off the resulting image that I'm happy with.

Video: Replacing a selection with a source