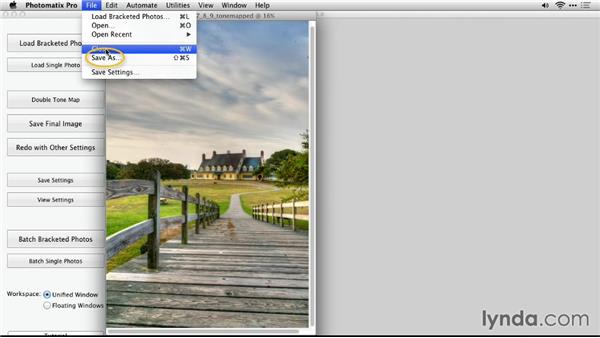 Chromatic aberration are slight variations in color that tend to show up around the edges, particularly in high contrast images. Now many tools tried to automatically correct this, but it does pop-up from time to time. For example here, if I look at these images, I can see in some of the high contrast areas Particularly at the edge here, there's a little bit of fringing. It's not very strong, but you might notice it here on the skyline of the trees, particularly as I get into some of the underexposed images.

Now it's subtle, but as I drag the image there you actually see is a little bit more. Bridge is doing a little bit of compensating, but particularly look there along the edge. There's a little bit of color shifting, right there at the tree there as well. And that's pretty typical when you have a high-contrast range. Now some lenses do this more than others and some cameras do this more than others. You might not have ever noticed it, or perhaps your camera is not affected. But in any case, Photomatics Pro gives you the ability to reduce chromatic aberrations with both Noise Reduction and Chromatic Aberration checked, I'll choose Align and Merge.

And we'll take a look at the resulting image. It pulls the chromatic aberration and noise out. Let's go back to Tone Mapping and do the Contrast Optimizer. That's looking pretty good. Note, we have a bit of streaking up in the clouds there, caused by movement, and I have to decide if I want to keep that or lose it. Let's close this for a second and run that one more time. In this case, I will take advantage of the option to remove ghosts. So we'll align and pull out those ghosts. The noise is reduced first.

Then the images are aligned. We'll do some automatic deghosting there. And let's zoom in so we can really see the problem area and the sky. Little bit of streaking there. Some of that is going to be natural to the image itself, but I'll hit return. And it's going to pick up that ghost, merge the HDR and pull out some of the chromatic aberration. All right. That's looking good. I think that's just more of an effect of the clouds that's left there. I like that image, nice and clean. Let's just use the default view there. We'll apply that, add a little bit of finishing touches.

Let's put some contrast in. And bring up certain colors. Little bit of blue, little more green, I like that. And I'm going to save this image as a high quality 16-bit TIFF file. Now, I am going to check the box to open inside of Photoshop, or you can actually send it to just about any other application like Lightroom, Aperture, iPhoto Anything you have on your computer. I'll choose Save, and it's going to create the file, and then open it with the other editing tool.

Reason why I did that was I want to take advantage and clean up some of these sensor dust spots. It was a very rough day out there and I got a little bit of sensor dust. In fact, I took this picture a long time ago and looks like there's a lot of sensor dust on this particular image. We'll go ahead and take advantage of Photoshop. Covert for smart filters and run the camera raw as a filter. And one of the things I like Is that it does have the ability to clean up spots. In fact I could check a box here to visualize the spots and play with that slider to make them easier to see.

That's pretty easy there, they pop right out. And using a smaller brush here. I'll just click on each spot, letting Photoshop auto-detect and pull a sample point to clean it up. Now you could, of course, do this the manual slow method and hunt for them yourself. But I'm just showing you very quickly the wonderful integration between these two apps, and the fact that apparently I need to get my lens cleaned from this shoot. I was out on a very windy day and it had been both raining and dust blowing, and.

It looked like it probably should have taken a little more time with cleaning my lens. But that Visualize Spots feature makes it pretty simple. There we go. Let's see if there's anything else that pops out. Think I got it. We'll turn that off, pop on out, and I'm pretty happy with that. While we're here let's just take advantage of Photoshop for a second. Note that with camera raw as a filter I could of course further enhance that image with things like vibrance and clarity.

And you can really get that image how you want. Click OK, and it will update pulling those spots out. If you miss one, remember, not a big deal. You can obviously step back in and clean that up or use any of the other tools that you have in Photoshop. But I am really happy with that image and I'll just close it and save it and that TIFF file is going to be written to disk, let's just compress that to save a little bit of space, And the layered file is done, and that's a great workflow example, showing you how Photomatics and Photoshop can work hand in hand.