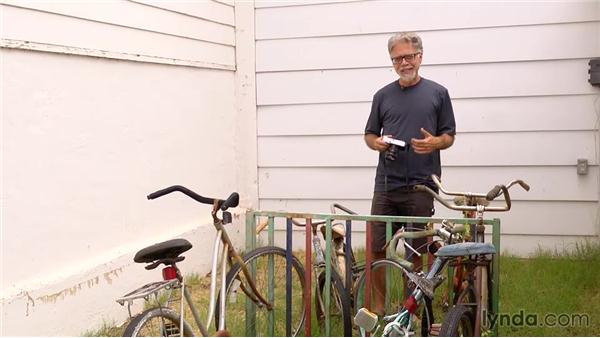 I've really got a thing for bicycles. I mean I really like riding bicycles, but I really have a thing for shooting bicycles. It doesn't matter where I am. I'm currently standing next to the Hamburger Inn in Mangum, Oklahoma. In fact, if you listen closely, you can hear like, a hamburger machine or something in the background. And there's this bike rack full of old rusty bikes and I cannot help it, I have to stop and shoot them. This week, on the Practicing Photographer, I'm not going to talk about shooting bicycles, though, but I am going to talk about that thing that you might have also. That thing that you just keep finding yourself shooting. I don't know what it is about bicycles.

I don't know if it's the simple perfection of those two triangles and two circles. if it's the fact that they always described a nice arrangement of lines. I would never shoot a recumbent bicycle. And I mean no offense to recumbent riders. But it's, it's this classical perfect bicycle shape that just really, really gets me. Found another one across the square earlier, and just had to stop and shoot at a bunch. The thing is, I don't know where any of this is leading. Paul Taggart talks about this in his course about how photojournalists are out there with some image in the back of their head that they're looking for.

And maybe one day they find it, and maybe they don't. That's what I want to talk about here. Maybe you've got a think for doorways or hanging laundry or puppies or whatever. And you, you just have to shoot them. That's how I am with bicycles. Now the curious thing is that I got all these shots of bicycles, and I don't really like any of them, but I'm doing it anyway. The point is, there's some bicycle shot out there that's going to be the one that I've been looking for this whole time. And what's great about doing the shooting anyway, because it means I'm practicing. I'm becoming more familiar with how tires relate to each other and how to take advantage of the shape of particular handlebars.

I'm building a bicycle photograph vocabulary. That's a very refined, specific, niche-y sort of vocabulary to have. But I'm trusting that one day it's going to serve me. The, the heavens are going to open up and spill light onto the perfect bicycle and the perfect background, and I'm going to get this great shot. Until then, I'm still getting a lot of good practice in both basic composition and just learning to see. So, find that thing that, you maybe already know what it is. Maybe it's doorknobs, maybe it's little details.

If you know that, go out and keep working at it. If you don't know it, go look through some of your images. You may find that you've already been shooting the same thing over and over. Keep with it. If you don't have something like that, start looking around. See if, see if there's a particular shape or something that your eye is drawn to. The point is, let yourself relax about it. Don't worry about coming back with keeper shot after keeper shot. Trust that sometimes you just have to follow that obsession over a particular shape or a particular subject matter and keep going until you see where it leads. I don't know where my bicycle thing is leading.

It may not ultimately lead anywhere. But I can't help doing it so I may as well not even try to fight it.