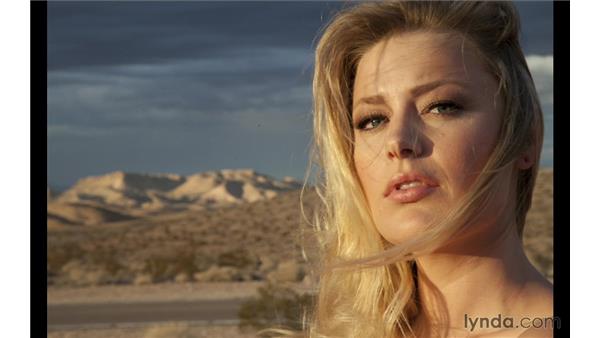 - I was shooting a model recently outside and it was very, very windy, and so I kept asking her to adjust her hair. Tidy up the hair on the left side of your face a tiny bit. That's good. Can you get a little bit of that hair out of your face? I like it all wild like that. A little bit of the hair out the right side of your face? That's it. Hair's getting a little--yeah-- So I really felt like I was being diligent there, and felt like the hair thing was not going to be a problem, and then I came back and found that it was.

This week on The Practicing Photographer, we're going to talk about hair. And the odd phenomenon of how you don't necessarily always see that it's a problem. So we shot a number of different things. The wind never stopped blowing. I kept saying stuff like that to her the whole time. I got back and I had a bunch of pictures that looked like this. Now, that's too much hair in her face. And the weird thing is, I didn't see it when we were shooting. And you may think, "What are you, blind?" But I was noticing that her hair was blowing around and going, "Oh, I kinda like the wild hair look." And so I was just in this zone of, "Oh good, wild hair is good." I was ceasing to actually see formal composition at that point.

And I had a lot of other things that I was worried about. I was trying to stay connected to her, to keep her open, so that she continued to do good stuff. The light was changing quickly, so I was looking for shots, I was worrying about exposure. I know, it sounds like I'm making excuses. But really, it's hard to keep it all in your head at the same time. So, if you look through here, this one was stuck there for a long time. That's how invisible this was to me. And I think it also shows how much our visual sense is not purely optical. It is a neurological phenomenon.

My brain edited out this hair because it was seeing past it. So what can you do in a situation like this? I was already telling her, "Hey, could you take care of your hair?" I thought I was keeping track of her hair, and I wasn't. So the first thing I would say is if you have even the remotest impulse of a problem such as that, such as hair, you've got to really indulge it. You've got to trust that this is an issue that you need to be looking at very seriously. You have to know that your eye can be blind to something like a big piece of hair coming across someone's face, and maybe be extra diligent about it.

Obviously, there are practical things you can do. Hairspray, hair ties, any number of different things. What I find works the best, is if you've got the resources for it, you have someone else there whose job is only to watch and manage hair. They can keep track of whether hair is in the face, leaving you alone to keep track of all of the other, the two dozen other things you're doing while you're shooting. Now you may think, "Well, I don't worry about hair. "I'll edit it out when I get home." And you can do that, but wow, you really don't want to.

It's lot of work. Here's a shot I picked out, one of the ones that I liked but her hair was in the way. And I was able to pull most of the really egregious hair out of the shot. It took a long time. It was several hours and there are still some things in here that I don't like. It's okay to say, "I'm going to take a few wild strands of hair out around the edges and tidy things up." As long as you're doing it in a way where the hair still looks natural. But actually trying to take hair out from in front of eyes that have eyelashes, so you're getting all these weird intersections, lips that have cracks and things in them.

It's tough work. So you really want to get this right in the field. And as with so many photographic problems, the key to getting it right in the field is just to be sure that your eyes are open and you're really seeing what the camera is seeing.