Working with a geotagging app on the iPhone 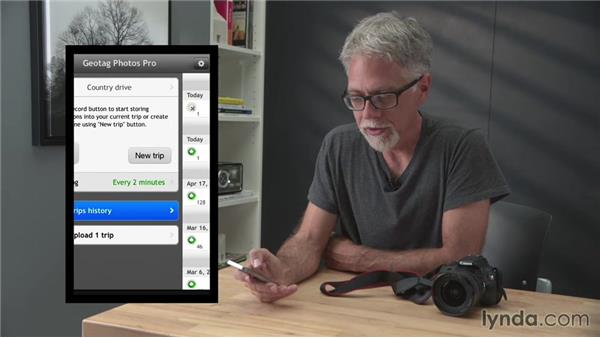 Join Ben Long for an in-depth discussion in this video Working with a geotagging app on the iPhone, part of The Practicing Photographer.

I'm getting ready, to go out and do some shooting today. I'm going to, drive out into the country, I don't really know where I'm going. And, I've got a rough idea, but, I want to geotag my images. Geotagging, is the process of storing location data using a GPS device and then later. Using special software to sync that location data to the photos that you shoot if you know where you were in a particular time, and you know the time the photo was shot, you can use software to, look up where you were at that time and tag that information into your photos.

Normally I carry a dedicated little geotagging gizmo with me, but, I lost it. There's a certain irony, to the fact that a device that's supposed to know where it is anywhere in the world, I can't find. Anyway, I lost my, my dedicated geotagging gizmo and I haven't bought another yet. I keep forgetting to. But now I'm not sure if I'm going to because, I've started using my phone for geologging. And I've been doing that using an app called Geotag Photos and I'm really liking how it works. I'm actually getting a smoother workflow using this then I was, with my dedicated Geo logger.

Its a very simple app. I just launch it and it tells me to define a trip and then I can record it. So, I'm going to, I can call this anything i want to like to put a date on it or whatever I'm just going to call this if I can spell country drive. And, now, all I do is hit Record. It's going to store my position every two minutes. I can change that if I want. I'm fine with two minutes. I don't move that quickly. And, that's it. I, now, can, use my phone for other things. I can let it go to sleep. Every two minutes, it's going to store the location.

Now, for this to work though. My camera clock needs to be set quickly and I always forget this. I travel to another time zone and I don't change it back when I get home. So I'm just going to set it to what my phone says. My phone is saying, 6:55, so I'm just going to go in here, and set the date and time. Now, I'm, obviously, not setting this to, perfect accuracy to within the second but that's actually okay. My, syncing software, later. We'll, compensate for the fact that mine might be off, it'll find the closest time within the log. So what's cool about Geotag Photos is at the end of the day when I get home, I can, stop my log, and this, menu appears down here that says upload one trip.

I can also go back here and look at the history of, all the logs that I have. I've got it configured right now so that when I upload, it goes directly into. My Dropbox account, which means that when I turn my computer on later, it's just going to be there. It's actually storing a GPX file which is my preferred form because Lightroom works very well with GPX files. Now, from here, it's a process of taking that file and syncing it to my photos. If you're not familiar with that, if you, have no idea what I'm talking about and, and all of the things that that gets me, check out my geologging course, I go over the whole workflow of geotagging using Lightroom.

One reason I've always liked the idea of a dedicated gizmo is that, most of the gizmos for geologging have great battery life, they'll go for 24 hours. And, running the GPS chip in the phone does drain the battery faster. And I use the phone for a lot of other things, so I always hated the idea for, compromising my phone life for using it for geologging. But now. I got this thing, which is a battery, that I can charge up and then use to charge my phone. This gives me, two or three phone charges on a charge. And one thing I really like about it, is that it has, built-in connectors.

So this is a lightning connector. I can just, plug it in right here. Press the power button, and my phone is charging. On the other side of it, it's got a, micro USB connector which I can use, to charge my Kindle, which is really cool. So, this is the device that's actually finally making for me, the phone, a viable geologging alternative. I really like having my images geotagged. I'm. I feel the difference now when I go back through my archive, and find an image I shot out in some wilderness area somewhere.

And I have no idea where it was. I mean I know this was then, Capitol Reef National Park but I don't really know where. I don't have that anymore. I can see exactly on a map where every image was shot. And, in addition to this. Nerdily, collecting data. Sometimes, when I see the location more specifically I remember a lot more things, and. That then is something I may want to write down or note about the picture or more importantly, it may make me go, oh,that's right. There was this other thing there. I want to go back, and take more picture of this. So having my images geologged. Is, making me better about understanding what I might want to shoot in the future.

And Geotag Photos on the iPhone is really making sure that I keep my images tagged.

Video: Working with a geotagging app on the iPhone