Working with flash for macro photography 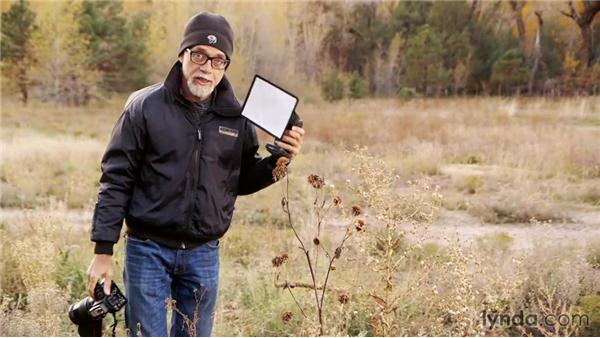 If you've spent any time doing any macro work of, really, any kind, but especially of flowers, you've probably run into an issue that I'm having right now. I've got this cool thistle here, and I want to get a close-up shot of it. But the problem is, there's all this stuff in the background. And it seems like that always happens with flowers. You never encounter just one. You always encounter bunches of them. And, so. Though macro shots have very shallow depth of field, very often they have very noisy backgrounds. Hi. I'm Ben Long and this week on The Practicing Photographer we're going to look how to take this close up shot, and dramatically dim the background, by using a flash, which may sound a little bit counterintuitive.

Let me show you what I'm talking about here. I'm going to just grab a quick shot of this. I'm shooting at about F4. I don't want super shallow depth of field. Because this thistle is further back than this thistle. If I can get all the way through this course and have all those esses correct, I'm, I'm, something's, well nothing's going to happen. But anyway, this one's farther back than that one. So, I've got a little bit of a deep depth of field situation here. So, I'm dialing out to F4. Here comes the wind. I'm at ISO 800. So, that I can keep my shutter speed up enough to freeze this motion, and, I get this.

So, the thistles are very isolated, thanks to depth of field. But there's still all that bright stuff in the background, and I find it a little bit distracting. So what I'm going to do is, use the flash, to dim the background, and here's how it works. In any flash picture, there are actually 2 exposures. There's the exposure that captures the ambient light in the scene and right now, all I've got is ambient light. It's falling equally all over the scene. The second exposure in a flash picture is the flash exposure, which governs the brightness of the area that's illuminated by the flash.

But look at the background. If that was the brightness of the background, that would be great, if the foreground were lit up. So I've got this external flash. I've put a softbox on it, just a little one, to soften the light, diffuse it some. I've got it off the camera because I don't want it firing right from the front because then it's all going to just spill on onto my background. And also I want it to look more like sunlight. I want it coming from up here. I've got it off camera using radio transmitters. I could just as easily use a cord. Whichever technology you have at hand. I have, also, using flash exposure compensation, dialed the flash down a lot.

I'm actually at its lowest power setting right now. Because it's pretty dim out here, and because my aperture is open real wide, and again, at F4. So, you've seen the exposure with everything dialed down. Now I'm going to keep that same exposure. I'm at a shutter speed of a two hundredth of a second, which is not going to let in much ambient light. And I'm going to see where my flash is pointed here, and get my focus set which I'm doing of course by moving in and out, because with macro, it's the easiest way to focus, and, I get this.

I like this a lot better than my original shot. Here's the original again. Here's this. The background is dimmer. It's got some flash spill on it, so I'm going to try again. I think there's also a little too much flash. Now I cannot dial my flash down any further. But I can move it backwards, as long as I don't run out of arm. So, I'm going to come over here. I've still got some arm. I'm going to try again. and I get this. That's working better. So here's my original, where my background is just a little too prominent. And here, is my flash picture, where I have sped up the shutter speed, to reduce the ambient light, and then brought in the flashlight on my subject.

So, in addition to having it isolated from the background, it's also just got more definition. Because the light was hitting the side, I can see more roundness to the thistle and I've got these nice little highlights on it, also. So this is a great way to separate your foreground from your background when you're doing flash work, if you're finding that it's competing in a way that really bothers you. Nothing special that you need, other than an external flash. You don't necessarily have to have the soft box. There are lots of other kinds of diffusers. And if you can get far enough away, you may be able to get a soft enough light.

I find it makes it much easier. And then you just need some way of controlling your flash. Again, I'm using radios. You could use a flash cord. The last thing is the trick to saying thistle properly. It is to keep the tip of your tongue up against the back of your front teeth and that's where that t,h sound comes from. And you gotta just say it kind of slowly, at least that's the way I've been doing it.