Working with an electronic shutter control 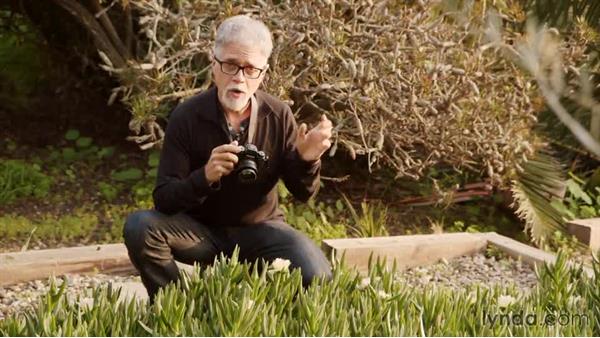 - Been out here shooting these flowers for the last few minutes, and I'm finding myself a little frustrated by something. I want to shoot shallow depth of field but it's bright out here. It's not going to be bright for much longer but I'm really liking the light that I have on it. But when I open my nice fast lens here, all the way up to f/1.4, I'm getting shutter speeds that go faster than a 4000th of a second. And this camera doesn't have a shutter that will go that fast. So I've got a couple of options. I can put neutral density filters on. Those are filters that cut light without changing its color or quality.

And so that would buy me some latitude to open up my aperture. Or I can activate a special feature on this camera, which is its electronic shutter. So normally, like most cameras, this camera uses a mechanical shutter. It's got a series of curtains that open and close to expose the sensor. But it's also got an option to turn on an electronic shutter, which means it's gonna open the shutter and just leave it open. And the shutter is no longer going to be mechanical, it's going to just be a process of turning the sensor on and off. When I do that, I can get shutter speeds up over 1/10,000th of a second.

So I can get these really, really fast shutter speeds. Which for a situation like this, becomes a good substitute for a neutral density filter. So I'm gonna activate the electronic shutter. It's a special feature on this camera. I can tell it to only use the mechanical shutter, to only use the electronic shutter, or activate both. It'll use the mechanical shutter up to 1/4000th of a second and then it'll switch over. So, I'm dialing open to 1.4, which is gonna be very shallow, and focusing. My shutter speed's coming in at 1/4400th of a second which is too fast for the mechanical shutter so I'm glad I've got the automatic.

And now I'm taking the shot. (faint click) And the camera makes barely any noise at all. This is another advantage of the electronic shutter. If I'm shooting in a museum, or at a concert or something where I'm not supposed to be shooting. Or where it's very important that I need to be quiet, I can turn all the beeps off the camera, turn the electronic shutter on, and the thing's almost completely silent. Here's what I got. So, nice shallow depth of field. Actually it's maybe a little too shallow. This flower's big enough that I might need deeper. But at least I've got the option. So your camera may not have this feature.

It's a fairly recent thing. I wanted to point it out to you because if you are camera shopping, it's something to keep your eyes out for. Because it is really handy in situations like these, where you need to get your aperture open, which means getting your shutter speed up way high. Obviously there's another potential use for it, which is stopping really fast motion. It doesn't work so well for that because you get a wobbly shutter problem. Wherein the top of the image is in a kind of different place than the bottom. So it's really about depth of field control, not about motion stopping.

It's an electronic shutter, it's showing up on more and more cameras. It's something to keep your eyes open for next time you're upgrading.