When the on camera flash is casting a shadow 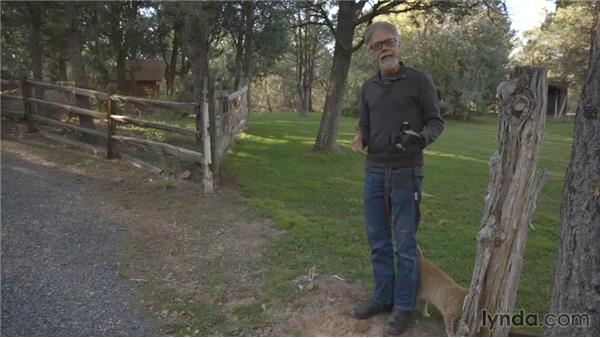 I want to start this off with a quick little composition tip. Any time you see fence posts coming to a sharp angle like this, you've almost always got the possibility, almost always have the possibility, it's very likely that you're going to have some cool wide angle composition here, because you've got these great lines going off in both directions. So I came down here to the apex of this triangle to try and shoot that. I've got a 17 to 35 millimeter lens on a crop sensor camera. So this is a nice wide angle here.

And I grabbed my shot, and it's good, but there's all this other light in the background. I want to experiment with dimming the background a little bit by using my popup flash. So I'm pulling out my popup flash and dialing down my ambient exposure. I'm fiddling a little bit with my flash power to illuminate the foreground and darken the background. If none of that makes sense to you, check out my Foundations of Photography: Flash course. What I want to talk to you about here now though, is this. Check this out. Just below that front fence post, there's this big circle of dark.

It wasn't there when I shot without the flash, and it is there with the flash. What's going on here, is my lens, is casting a shadow. So there's a cone of light coming out of the flash. The bottom part of it is clipping the lens, and the lens is actually casting a shadow into my frame. You'll sometimes, these won't always necessarily be so obvious as a flash shadow, depending on the complexity of your scene and what's in it. It may just look like this odd patch of modeled light or something. But in a scene with a flat texture like this in the foreground, it is very obviously a shadow.

And to tell you the truth, there's almost nothing I can do about it. I can go get an external flash because a flash up higher isn't going to clip my lens. The only other thing I can do, is try to zoom past it. Because even though my lens gets longer, and so possibly creates more shadow, there is, it's also cropping the image more. There is a sweet spot in here where I can get some more telephoto power without having a flash shadow. So, I would put it to you this week, on the practicing photographer, to go get your lenses, and put them on any camera that you have with a pop up flash.

And do some experimenting to figure out which ones do have a shadow problem, and at what focal lengths if they're a zoom lens. Now, you may find, that the shadow appears more regularly or more frequently when you are shooting more parallel to the ground. As I tilt down, I may not get the shadow as much, because the flash is more exposed to the open ground. So don't just stick a lens on your camera, and go like this and go I don't know, I don't have any shadows. Do find a nice shot, so that you're not bored. But shoot parallel to the ground. And figure out which lenses is a casting a shadow. If it's a zoom lens, zoom in a little bit further.

Video: When the on camera flash is casting a shadow